Welcome to the first in our new Less is More series devoted to backyard bungalows. Over the next few months we’re going to peek over back fences and venture down garden paths to hunt out dwellings that do their bit for positive urban density. Granny flats, garage conversions, cabins, shacks – call them what you will – what they signal is a creative, and somewhat affordable, solution to acquiring your own plot of land well within the city limits. 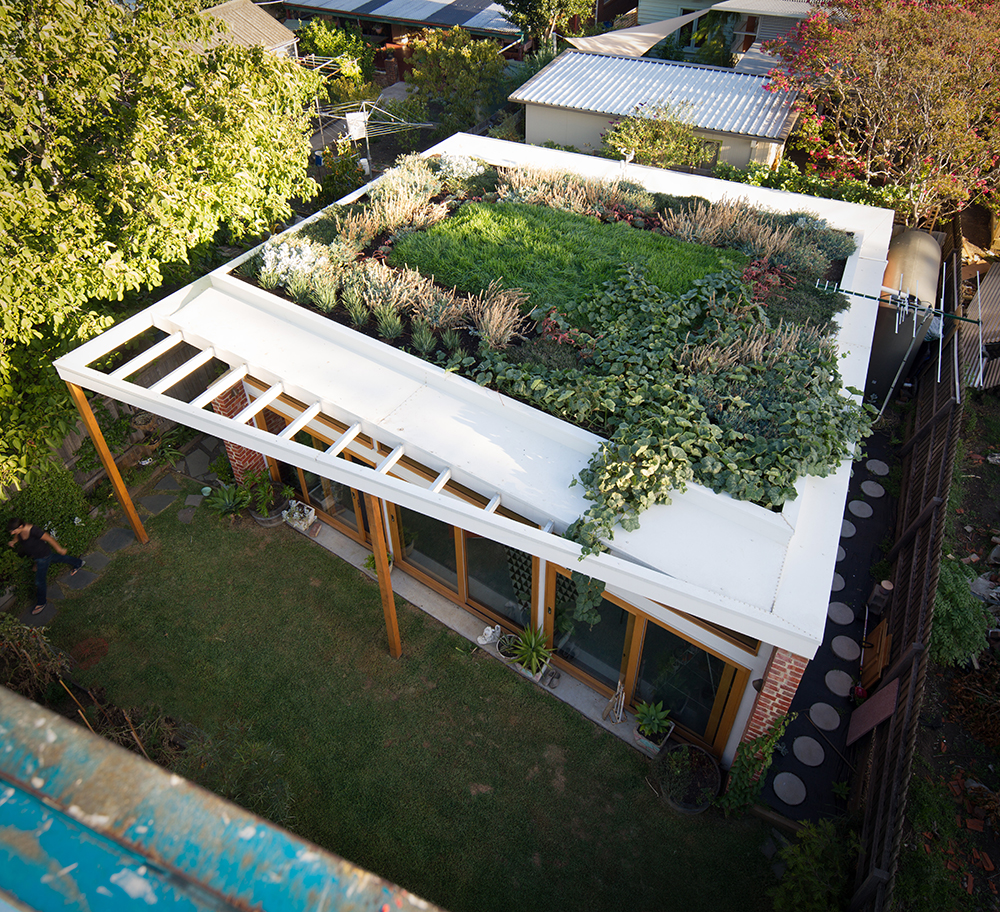 Serving both beauty and function, the green roof garden. Photo by Nic Granleese.

Currently, the median house price in the Melbourne suburb of Coburg stands at around $685K (source from RP data from the month of October). This figure is a result of a rippling price increase from the CBD outward, a price hike that now sees the suburbs of North Fitzroy, Northcote and Thornbury almost out of the question for first home owners. In response, rather than sprawl, the call has come to densify – and the first place to look could be in our own backyards.

The compact granny flats of ’60s and ’70s Australia have become a coveted piece of inner-city floor space. Combined with a canny use of design, these tiny homes (once the bastion of the elderly and teenagers) can transform into comfortable abodes for small families, pet-owners, avid gardeners, and those wanting a stand-alone alternative to life a few floors up. This series will feature a range of spaces – some you’ve never seen, some you’ve seen before – but all with an eye to creativity, comfort and thoughtful design. 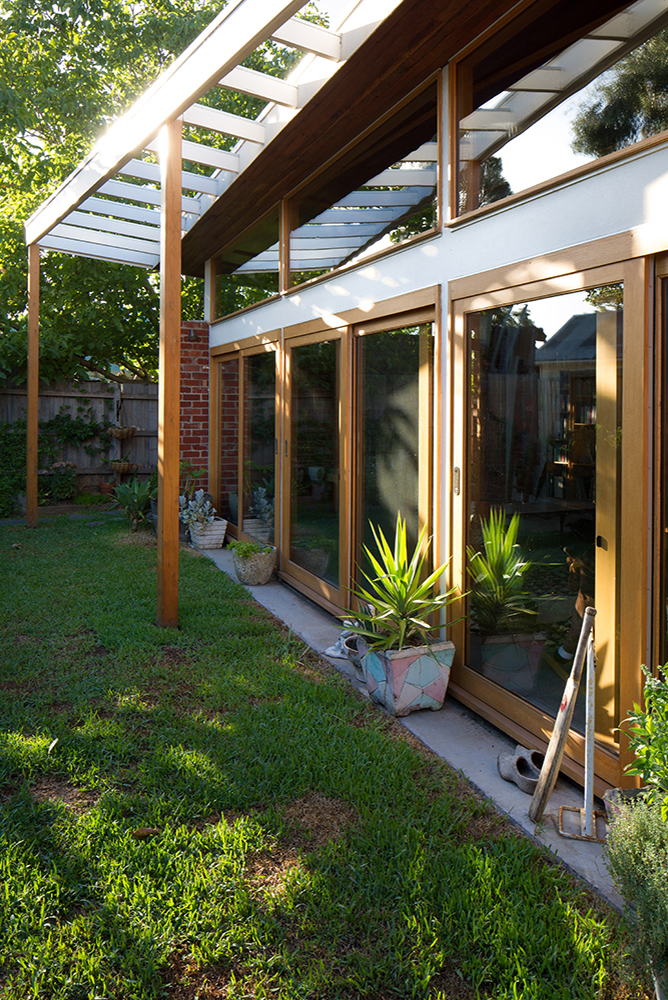 Firstly, we visit the Coburg home of Emilio Fuscaldo, of Nest Architects, and his partner Anna Krien. Emilio and Anna designed an 80sqm dream home, which they now harmoniously inhabit with their two small children, dog and cat. The tiny rear plot on which it sits – sold at auction in 2010 by homeowners looking to subdivide their block – gave Anna and Emilio enough space to work with and, by design, they were able to maximise what they got. The ‘green roof’ is the most distinct feature of the house and serves dual purpose, both as garden space and for seasonal temperature control. As for the build and interiors, canny cost effective decisions were made at every turn. Here Emilio tells how he came to stake his own little plot of paradise.

“Australia is currently going through an affordability crisis, whereby first home owners are finding it hard to buy affordable houses close to the city. For the money we spent, in the area we live, we really would have only been able to afford a two-bedroom apartment or a small townhouse. There was no way we would be able to afford a stand-alone house. 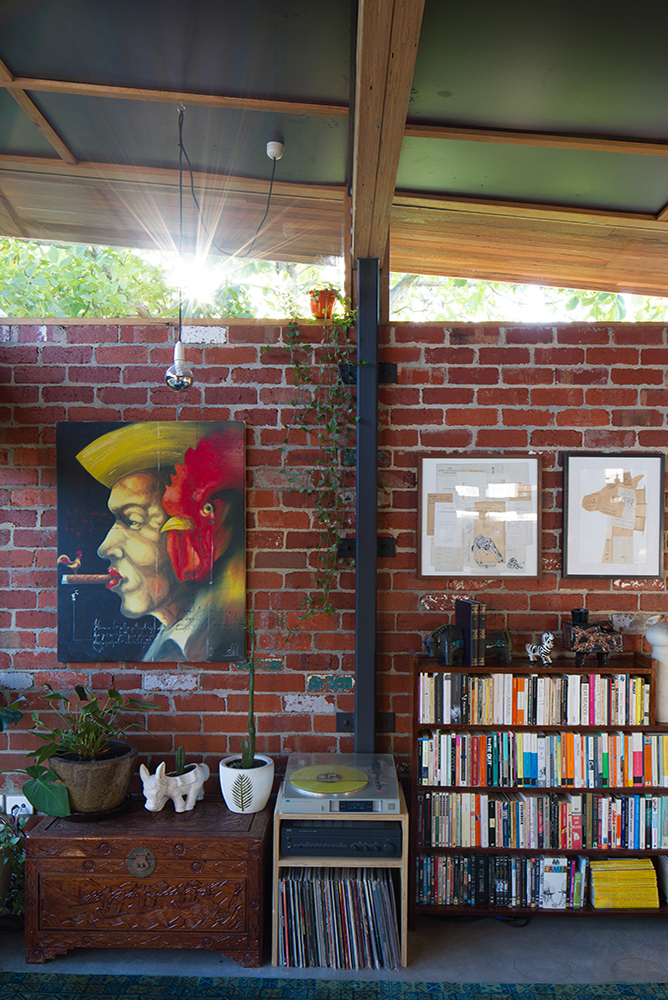 Raw red brick adds texture, while light is captured at every opportunity. Photo by Nic Granleese.

In our case, we simply bought what was the rear yard of an existing property [Anna found it advertised on realestate.com] and built our house on that plot. This model of buying and building in a backyard is not super common. What generally happens is that a developer will buy an entire block, demolish the existing house and build three or four townhouses on that plot.

So, this is an example of how to realise a small-ish house with a good sized yard (that fits a dog and a cat), close to the city (we’re 7km from the centre of the city in Coburg). A lot of our friends have either committed to renting for the foreseeable future or moving out to the country (1 or 2 hours from  the city). 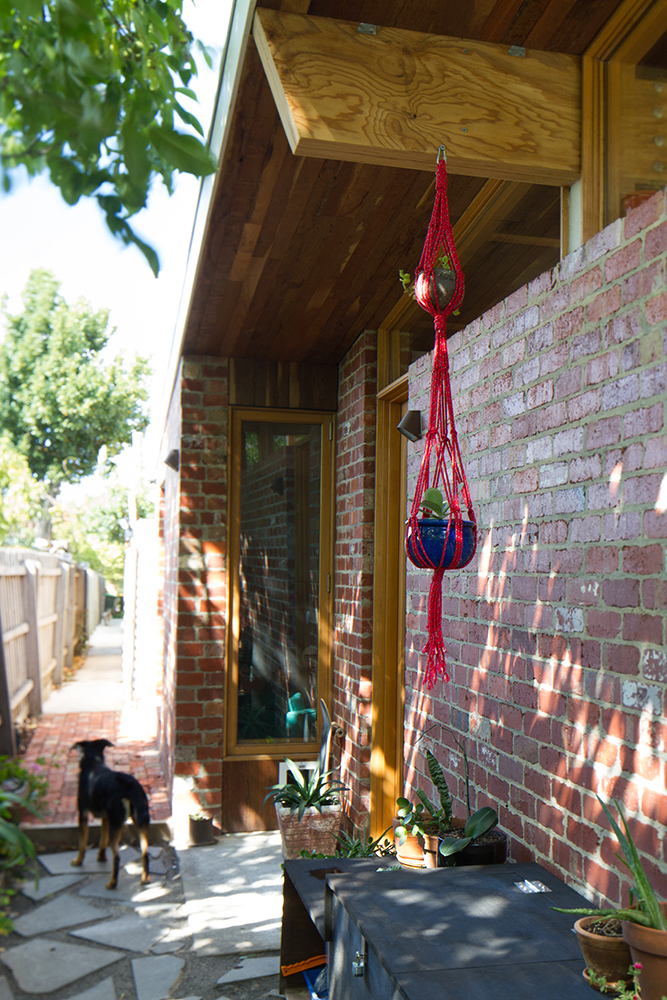 The plot might be tiny but there’s still enough room for their hound, Mowgli. Photo by Nic Granleese.

We had no problems whatsoever with council. They did ask why our front door was not orientated toward the street and I reminded them that being 40m from the street, the opportunity to add to the ‘streetscape’ was negligible.

With regard to the house itself, you certainly could have built it for less money. The things that pushed the project from being really cheap to slightly more expensive were the green roof, which added close to $15k, the hydronic heating in the concrete floor, specifying Forestry Stewardship Council-certified timber and the double skin brick walls. So, although we wanted to build a cheaper house and prove a point that you don’t have to spend a lot to achieve a lot, we also didn’t skimp. Having said that, for the money we spent we got a truly sustainable house. 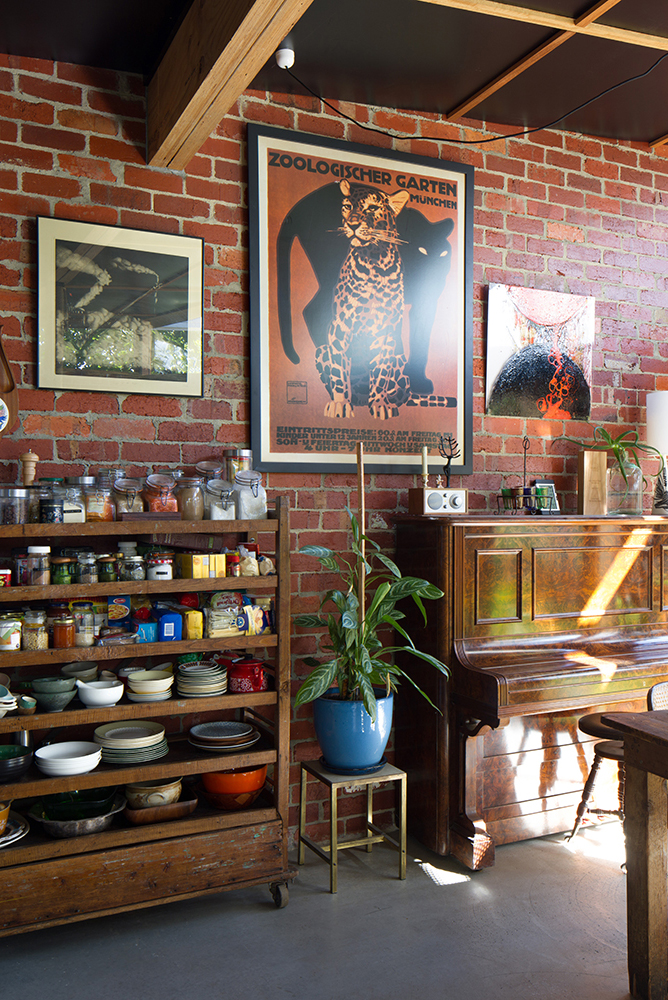 Emilio and Anna sourced many materials and “bits and bobs” from eBay and second-hand shops around Melbourne. Photo by Nic Granleese.

In order to save money, we chose to use materials that already came with a decorative finish and therefore did not need another trade to cover them up and make them pretty. For instance, using recycled bricks meant that we didn’t have to paint the walls (inside or out) because the bricks come with a great patina. Similarly, the concrete floor is already a decorative surface. Therefore, both walls and floor simply required a clear finish, that we applied, avoiding the need for specialist and therefore expensive painters, plasterers etc. 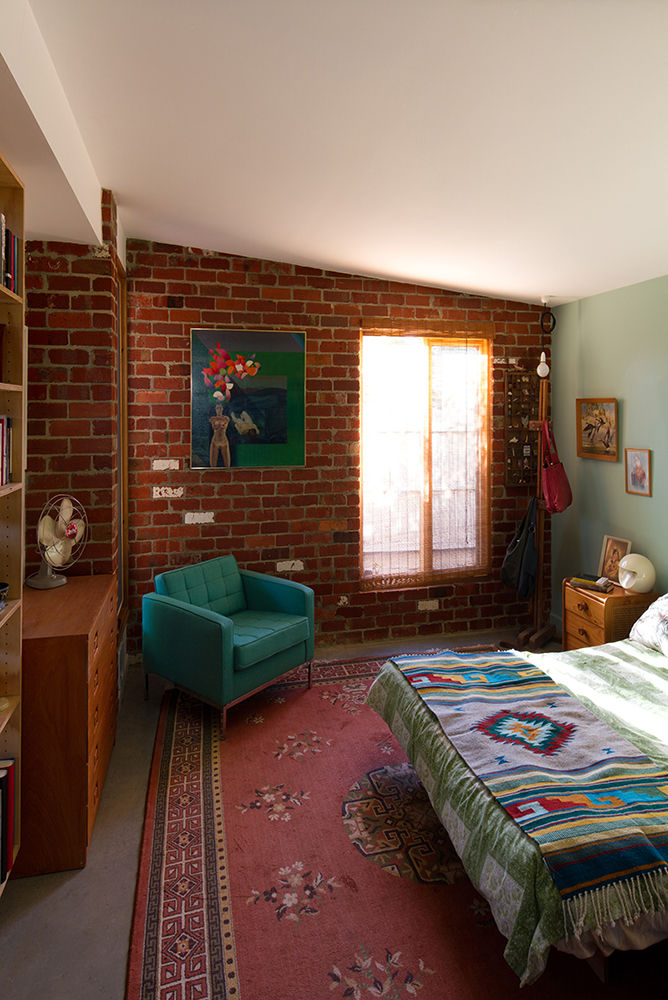 Hydronic heating under the polished concrete floors keeps the space cosy all year round. Photo by Nic Granleese.

Where we did install plasterboard (sheet rock) in the bedrooms and bathroom, I did this myself and then I painted these rooms. All our taps, the kitchen sink, the bathroom basin, the shower rose and the bathroom bench (which used to be part of a bowling alley) were bought on eBay for a fraction of their new retail cost. Our dining table belonged to a fabric wholesaler who was going out of business, and was throwing it out. We found the kitchen work bench in a shopfront in Melbourne for $500. I then spent three days sanding the dark green paint only to reveal a fluorescent orange undercoat. Two more days of sanding and a swan was born. The open shelving between the living room and our bedroom is really simple plywood, that I ordered, cut to size and screwed together myself. In summary, we didn’t have any joinery (casework) built. We simply used what we could find on eBay to store our bits and bobs. 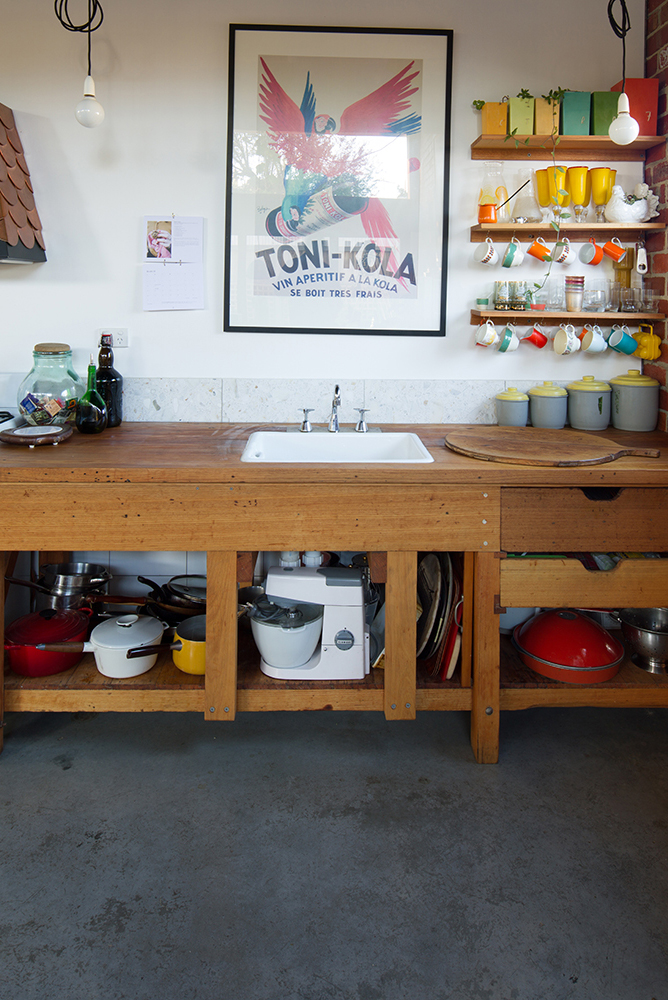 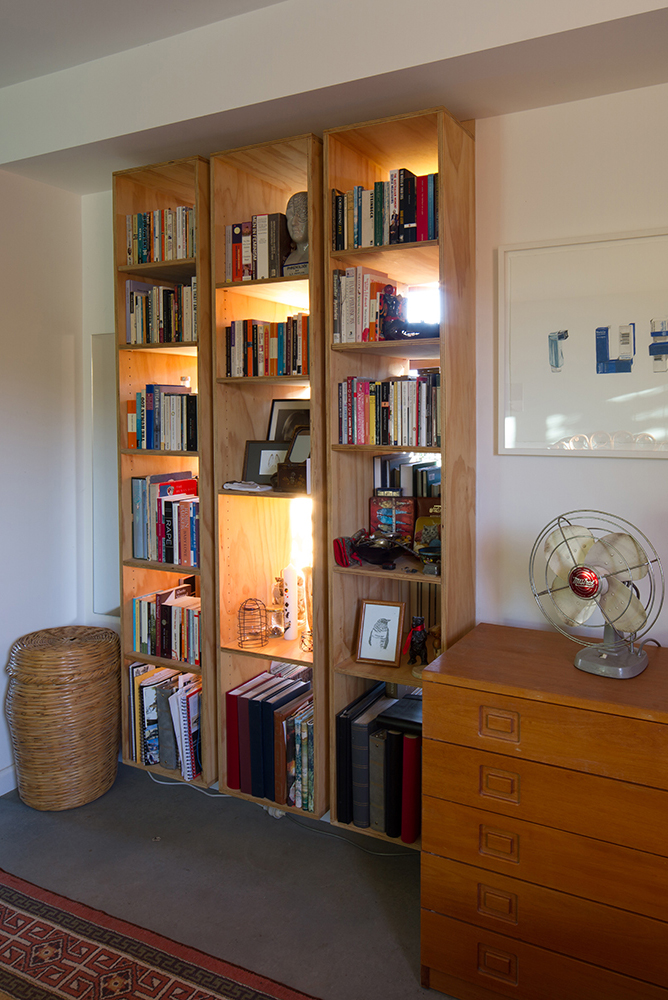 More “bits and bobs”, that give the space its character. Photo by Nic Granleese.

All the lighting are really simple pendants with exposed bulbs, avoiding the huge cost of fittings. The ceiling will be lined with a laminate (black) which can be installed by myself and a carpenter, as opposed to sheetrock which comes with lots of added costs. 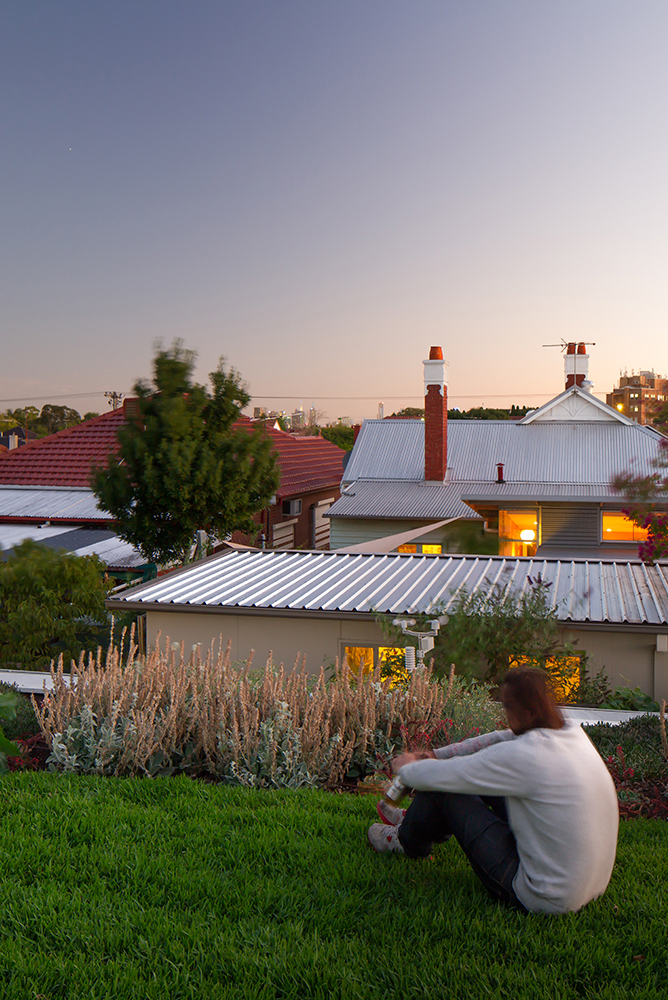 The most distinctive feature of the Florence Street residence is its ‘green roof’.

Emilio explains, “We wanted a truly sustainable home from the floor to the roof and everything inbetween. I had read about the insulative properties of a living roof and it just made sense.” Ensuring the roof was installed properly was of huge importance, with much consideration being given to loading, waterproofing and drainage. Also, the experiment of choosing plants that would be able to withstand the elements of the rooftop – “We installed a watering system under the plants, but surprisingly, after a year we turned the watering system off and the plants are doing just fine. The grass dies off after each summer, but it doesn’t take too much rain to get it back to being green and lush. The types of plants we selected are really hardy and can tolerate the harsh conditions up there.” 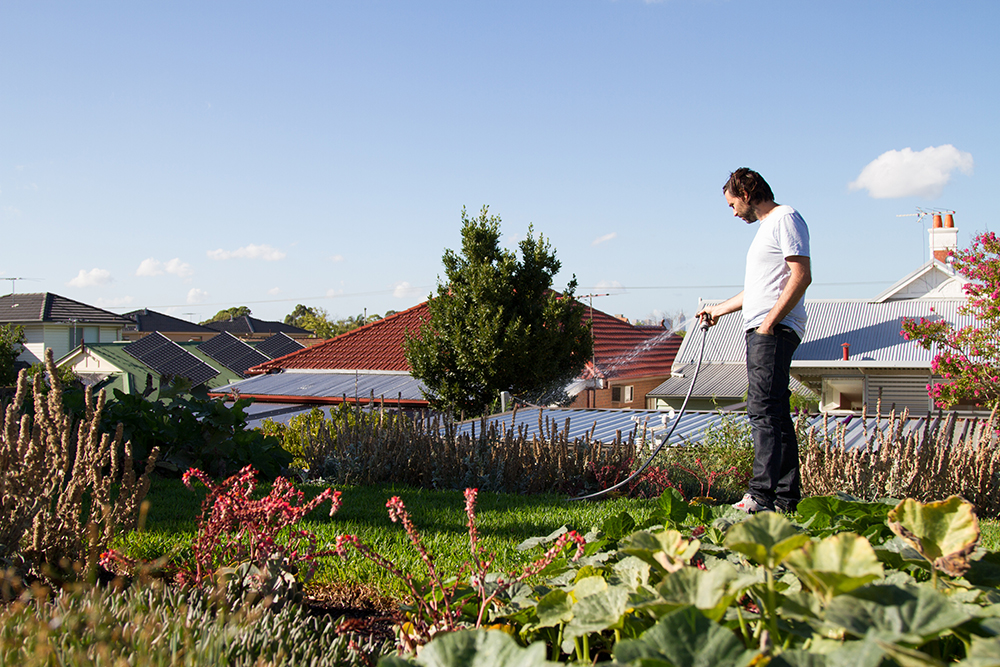 A drought-resistant turn called Sir Walter Buffalo thrives as the grass layer while a mix of hardy natives, pumpkins and zucchini have sprung forth from the thin soil profile. Photo by Nic Granleese.

The roof is already doing its job with the family saving 27% on their heating bill last winter. The house also provides a cooling effect in summer, with the roof bringing the temperature down almost 6 degrees in summer. Emilio predicts that within the next ten years the savings on bills would have paid off the cost of its installation. “It’s also become a haven for local animals,” says Emilio, “I had no idea how many bees, birds, spiders (and the neighbouring cat) would use the roof.” 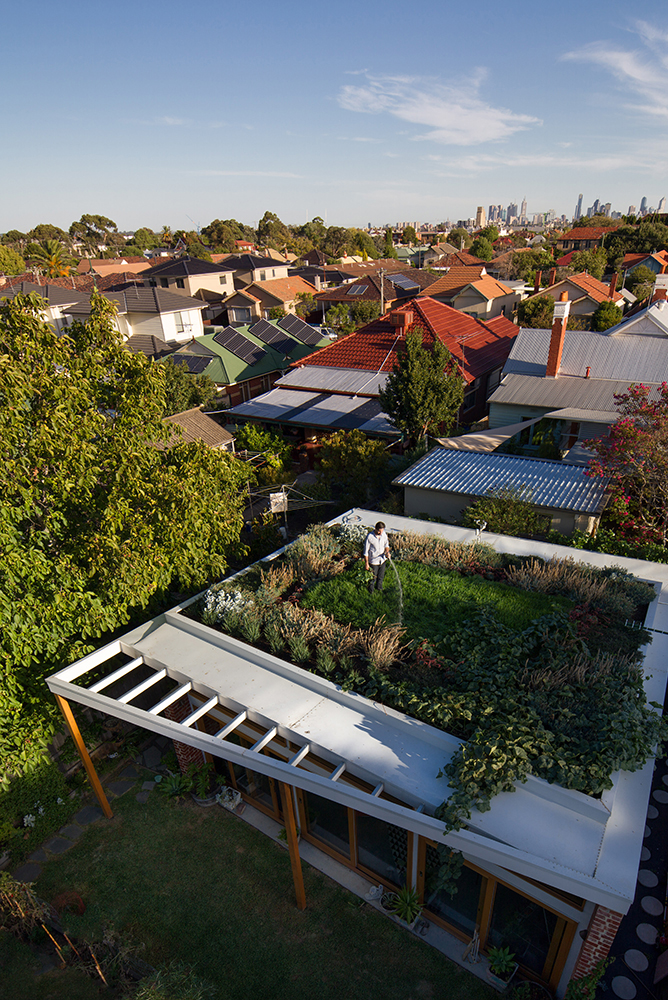 “Our neighbours love it. I thought they would hate seeing us up there and think that we were spying on them. but in fact all the neighbours have said how much they enjoying looking up and seeing all that green.”

Thanks to Emilio for kicking off our series on backyard bungalows. All photos by Nic Granleese.

Even though the plot is small, the green roof means Emilio and Anna have two gardens to choose from. The second with a fantastic view. Photo by Nic Granleese.

While walls and floors have been left raw, windows have been double glazed for additional insulation and cooling. Photo by Nic Granleese.

Up in the clouds: the green roof garden. Photo by Nic Granleese.

Even though the plot is small, the green roof means Emilio and Anna have two gardens to choose from. The second with a fantastic view. Photo by Nic Granleese.

While walls and floors have been left raw, windows have been double glazed for additional insulation and cooling. Photo by Nic Granleese.

Up in the clouds: the green roof garden. Photo by Nic Granleese.

The second in our Backyard Bungalow series is a beautifully tiny abode belonging to Schoolhouse Studios’ Alice Glenn and her pint-sized sidekick Otis, which is tucked away behind her Auntie’s place in Clifton Hill. The building itself has existed for several decades, but has been coaxed into its current (very comfortable) iteration thanks to a couple of renovations over the years.

In our third instalment of Backyard Bungalows, we take a turn through the Carlton North cabin of Alex Kennedy. The 35sqm space was once a car garage amidst the lush garden behind her mum's house, until Alex (and friends) took to it with a hammer and plastering board, and designer Sarah Trotter of Hearth Studio helped translate Alex’s ideas around recycled materials and Japanese minimalism into built form.

Murray Barker's garage conversion is a nice note on which to wrap up our Backyard Bungalows series. To maximise his compact 18sqm space, he makes great use of the outdoor areas either side of it. Referencing Donovan Hill's D House, Murray has added windows and shutters that encourage interaction with the laneway and the life upon it—while still providing natural light and privacy when required.

Edwards Moore's Lightbox House is a particularly ingenious rendition of a traditional single storey terrace in Carlton North, making it one of our favourite Less Is More-leaning projects on our home turf. Replacing the interior boxiness with a central landscape suffused with light is a seemingly difficult task, but one which the architect duo rose to with ease and aplomb.