The statistical secret to happiness

Did you know that statistically, four main factors determine how happy we are at any point in time? It seems that contentment stems from a delicate balance of our gender, personality, external circumstances & age. Intuitively, this makes sense – but how does age determine happiness? Tim Riley talks the U-Bend & the Spending Wave, suggesting we “downshift” our way to happiness.

First the U-bend – the height of unhappiness

The Economist published an article called The U-bend of life – Why, beyond middle age, people get happier as they get older, which cited the results of a number of different studies that indicate that people are the least happy they will ever be in their lives in their 40s and early 50s. Based on these studies, statistically speaking, we reach our height of unhappiness at a global average age of 46.

The picture these studies paint for us is of initial cheer when we start adult life but that things start going downhill around middle age until our happiness bottoms out during a period commonly known as “the mid-life crisis” in our 40s-50s. However, as we move towards old age and lose things we treasure – vitality, mental sharpness and looks –we also gain what we spend much of our lives searching for: happiness. 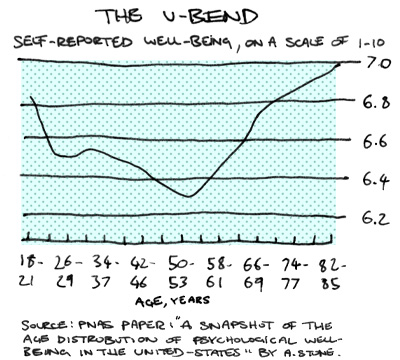 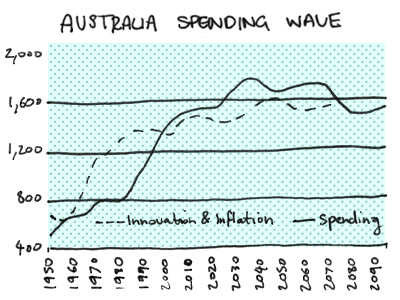 The most interesting thing about the U-bend “phenomenon” is that it appears all over the world. David Blanchflower, Professor of Economics at Dartmouth College, and Andrew Oswald, Professor of Economics at Warwick Business School, looked at “happiness figures” for 72 countries. They found that the nadir varies among countries – Ukrainians, at the top of the range, are at their most miserable at 62, and the Swiss, at the bottom, at 35. But in the great majority of countries, people feel most miserable in their 40s and early 50s.

In another study, Arthur Stone, Joseph Schwartz and Joan Broderick of Stony Brook University, and Angus Deaton of Princeton, broke well-being down into positive and negative feelings and looked at how the experience of those emotions varies through life. Their study found “that enjoyment and happiness dip in middle age, then pick up afterwards; stress rises during the early 20s, then falls sharply; worry peaks in middle age, and falls sharply thereafter; anger declines throughout life; sadness rises slightly in middle age, and falls thereafter”.

The Spending Wave – the height of spending

To me, what makes 46 an interesting age is that it seems to correspond almost exactly with another economic theory called “the Spending Wave” by American author Harry Dent. Dent is an economist who has written a number of books over the years. The only one I’ve read is (the rather tortuously titled) The Great Depression Ahead: How to Prosper in the Crash Following the Greatest Boom in History. It’s worth a read to understand just how the “Dent Method” works and how it predicts macroeconomic trends by looking closely at a country’s demographic landscape. Dent’s theory is that people move through predictable stages in their lives, including education, marriage, and family formation. On average, a person’s peak consumer spending – and thus their peak contribution to the economy – happens between the ages of 46-50. Dent writes that:

“Much like the average life expectancies that life insurance actuaries have used for decades to predict the future and bet trillions of dollars…the average family or household in the US (and similarly in most developed countries) peaks in spending between the ages of 46 and 50, or an average of 48. As new generations move into their peak earning, spending and productivity years, the economy booms on about a 48-year lag. This creates the greatest economic indicator in history – the Spending Wave – which projects economic booms and busts, including stock market cycles, five decades into the future.”

In Dent’s theory, our peak spending comes years after our largest home purchase (between the ages of 37 & 42). At this point in our lives, we want to improve our homes through furnishings or renovations; as our children hit driving age, we want to buy better cars and more of them and many of us will be supporting kids through their last few years of school or university years. The turning point in household spending occurs after we reach our late 40s, after which on average, we spend less for the rest of our lives. At this point in life, it’s not that we live less well, but that we don’t need a bigger house, we don’t need to support the kids and hopefully, we don’t drive as much. We move from being upgraders to downgraders. At this point, the kids have flown the coop and the savings cycle kicks in – we’ll save at the highest rate while still enjoying higher incomes and lower expenses. Our average net worth peaks around 64, just after we retire. You can see this pattern in ABS stats on Gross Household Income too. It also looks suspiciously like an inverse U-bend curve… 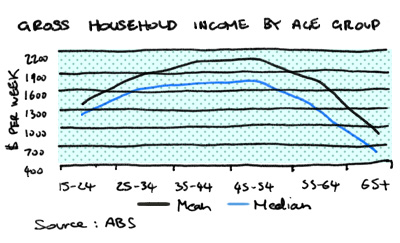 So, Dent uses these insights as a long-term economic forecasting tool to assess the health of economies by moving forward the birth index 47.5 years (to be exact). In Dent’s reckoning, a baby boom in 2012 heralds an economic boom in 2059.

So, what can we learn from the U-bend and the Spending Wave? Don’t have kids? Don’t celebrate your 46th, 47th or 48th birthday?

Hopefully awareness and perspective can help us avoid being a statistic. The Economist asserts that happiness increases past 50, not so much because of external circumstances but through internal changes. Our behaviour changes at different ages. Older people resolve conflict better than younger people. They are more experienced at controlling their emotions, accepting misfortune and less prone to anger. Laura Carstensen, Professor of Psychology at Stanford University, has observed that as we get older we grow better at living for the present. We come to focus on things that matter now – such as feelings – and less on long-term goals.

Living for the present and focusing on things that matter is not easy though in today’s world – it’s very easy to be infected by “affluenza”. Affluenza is a term used by critics of consumerism. It has been described as the buying of stuff you don’t need, with money you don’t have, to impress people that you don’t like. According to Clive Hamilton and Richard Denniss, authors of the book Affluenza: When too much is never enough, Australia has contracted the illness of overwork, waste, damage, debt and unhappiness, caused by an obsession with money. Hamilton and Denniss suggest that today, many Australians are responding to affluenza by “downshifting” – reducing their income and placing family, friends and contentment above money in determining life goals. It would be interesting to see a U-bend study on the happiness levels of downshifters at 46. Or whether the majority of downshifters do so around the age of 46…

One thing seems clear to me: if the weight of consumerism and financial pressure is fundamental in making us the most unhappy we will ever be throughout our lives during our late 40s, perhaps approaching our lives and investment choices in a mindful, open, creative and economically sustainable way, can help us ensure our spending waves are flatter and longer. And, that our U-bends are as shallow, quick and painless as possible.

This article is based on “The statistical secret to happiness” by Tim Riley, originally posted on Property Collectives in 2011. All illustrations by Marc Martin (with the three illustrated graphs based on those referred to in the original post).

View all stories by Tim Riley

The Internet of Things

New technology and the emergence of the “Internet of Things” is leading the way towards a connected future where seeing and controlling your energy use will be as easy as checking into Instagram. Tim Riley asks, what is this Internet of Things? And how will it make it easier for us to better manage our energy use and reduce our impact on the environment?

As The Fifth Estate's Cameron Jewell discovers, we’re spending US$550 billion a year on fossil fuel subsidies globally. But freeing up just a small portion of this money could finance access to water, sanitation and electricity for everyone on earth, according to a new commentary piece published in the journal 'Nature Climate Change'.

Introducing Less is More, a new section presenting outstanding examples of architecture and design for compact living, as curated by Assemble Papers. Here, Quino has chosen a recent project by young Spanish practice ARQUITECTURA-G. In this renovated apartment in the historic El Born district of Barcelona, a small footprint, low budget and creative use of space combine to winning effect.