Art curator Hiroshi and food designer Haruna Ito live with their baby Yuri and friend Noriko in a magical share house near Shinjuku, where one bedroom has been turned into an art installation for visitors to stay in. In our special two-part ‘shared living’ series, Emily Hutchinson looks around the world for some of the most inventive ways of living closer together. This story is one of many collected in Emily’s new book Shared Living: Interior Design for Rented and Shared Spaces.

Japanese art is widely appreciated for pushing the boundaries.

Those boundaries sometimes include making entire bedrooms an art installation, as has been done in a share house near Shinjuku. 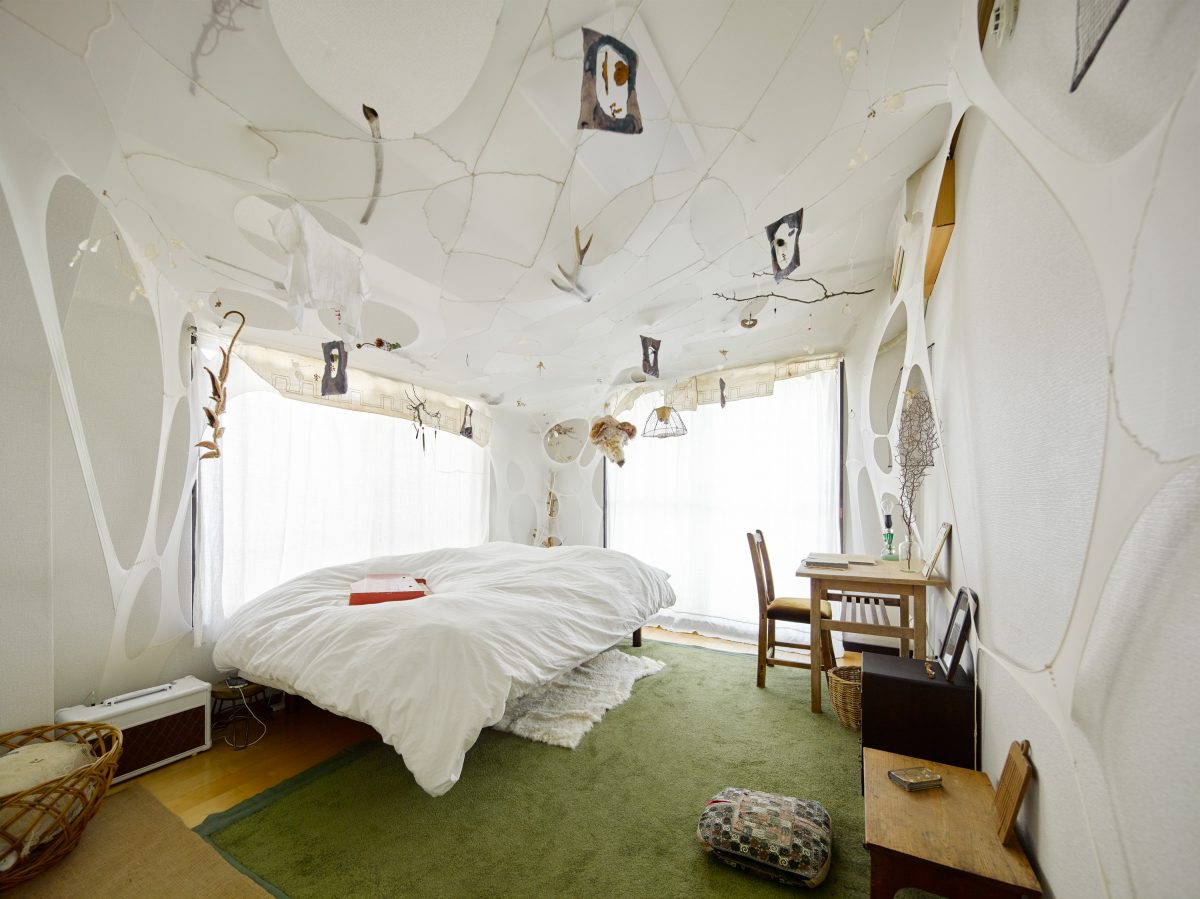 Hiroshi, his wife, Haruna, and their baby, Yuri, live in one bedroom, Noriko lives in the second bedroom and the third bedroom is open to guests and art aficionados to come and rest their heads. Yumi Arai is the artist behind the installation and has created a dreamy atmosphere to escape to.

Hiroshi, Haruna, Noriko and Yumi all met through their love of art.

Noriko moved in with the couple and their baby and lives on the top floor, sharing the bathroom, kitchen and living room with his housemates. ‘Everyone works in social design and art, so we have similar interests,’ says Noriko. ‘No one is stressed in the house – we each keep our own pace and respect each other’s space.’

Hiroshi and Haruna had no trouble deciding to share their house with Noriko, despite having a little one. ‘It’s important [for Yuri] to meet another adult and not only our own family I think,’ says Hiroshi.

With the third bedroom vacant, Hiroshi wanted to bring art into their home and approached Yumi to curate it. 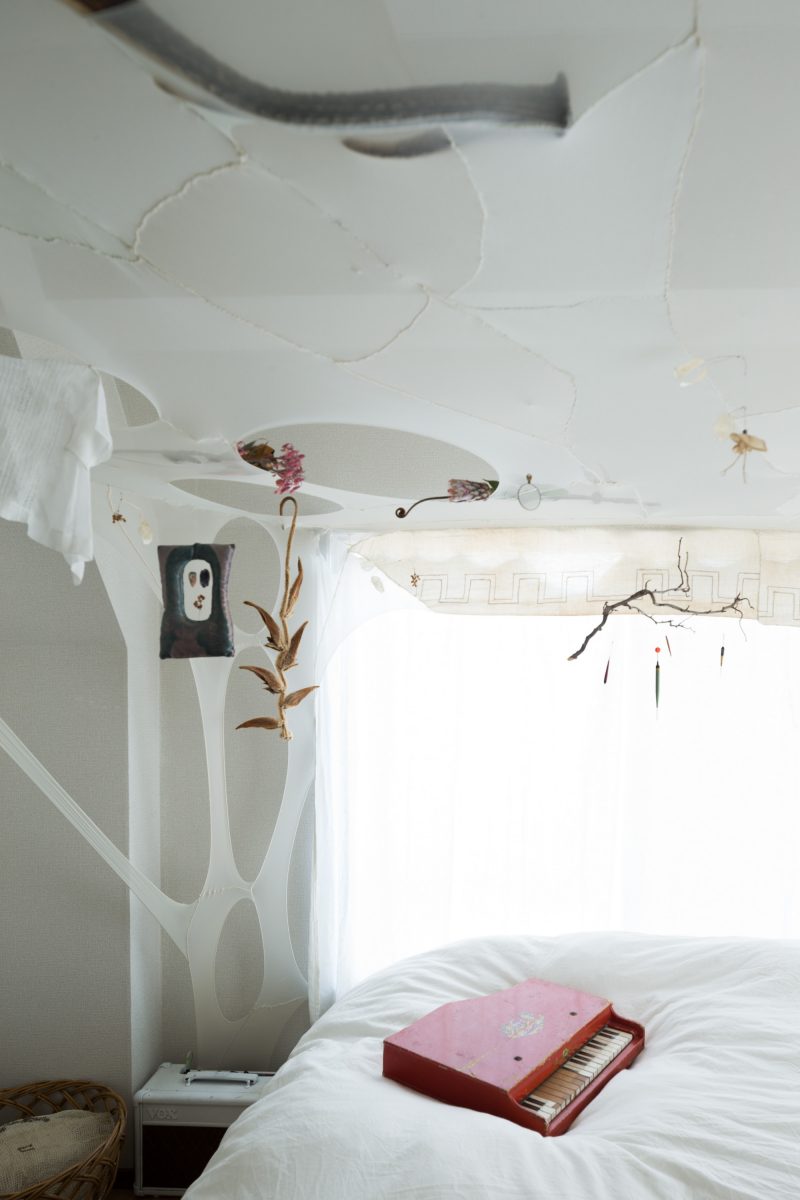 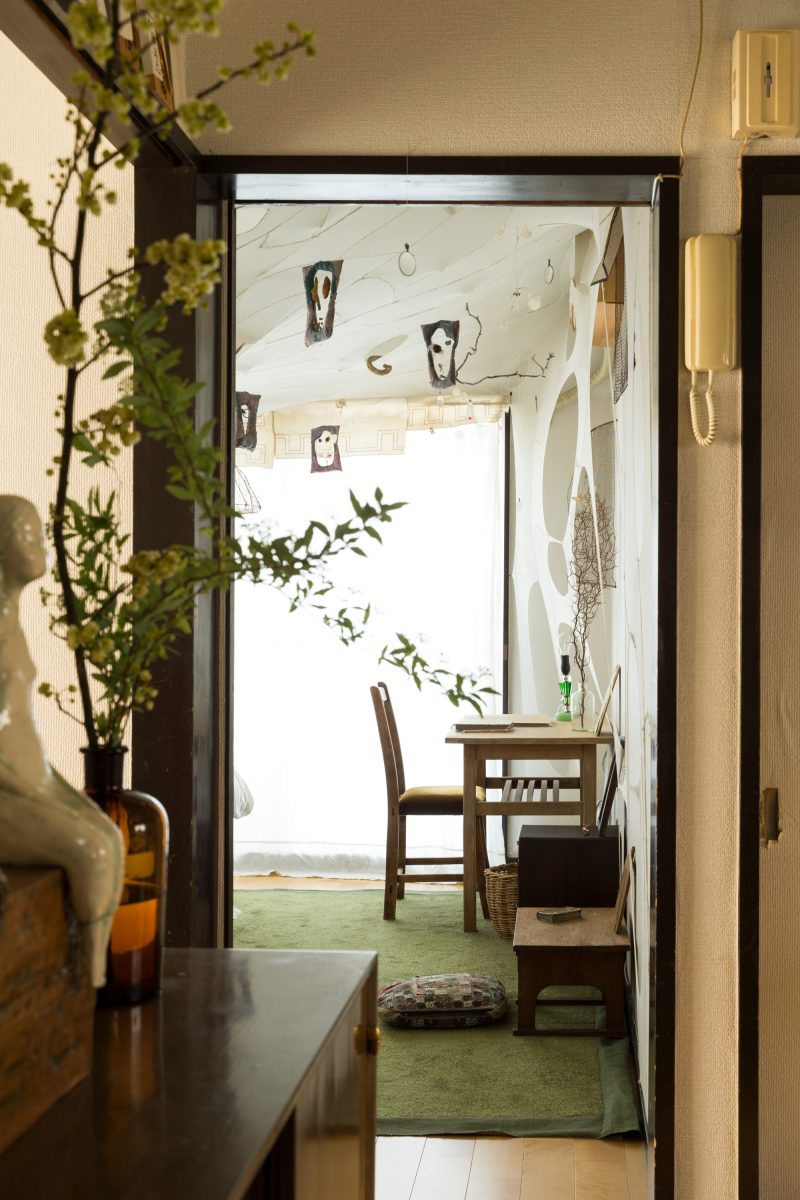 ‘I was thinking it’s sad that installations disappear every time the exhibition finishes and wanted to preserve an installation for a long time,’ says Yumi.

The room took about four months to complete and has since hosted a number of guests. Yumi drew inspiration from Finnish and Japanese folklore and the sounds from the street below. ‘When I entered the room, I heard some children’s playing voices from the elementary school,’ Yumi explains. ‘Also, there is a sloped ceiling in the room. From these inspirations, I associated it with a kind of secret base and decided the concept of the room would be “maja”. In Finnish, “maja” means tree house, which only children can build in the tree. When I was small, I made a secret tree house with friends and the time spent there felt never- ending and not to be disturbed by anyone.’

The sheer tights that are stretched across the room make it feel secluded, with minimal pieces of furniture that includes a writing desk, a chair and a bed. The room encourages dreams and imagination with playful touches like the children’s piano and abstract hangings such as the bear head. ‘The bear is a symbol of God in a forest according to the mythology of Finnish and Japanese folklore,’ says Yumi. ‘When I was small I had a teddy bear and shared the most time with it, like a best friend or alter ego. The bear is the most important animal that connects with memories of childhood for me.’ 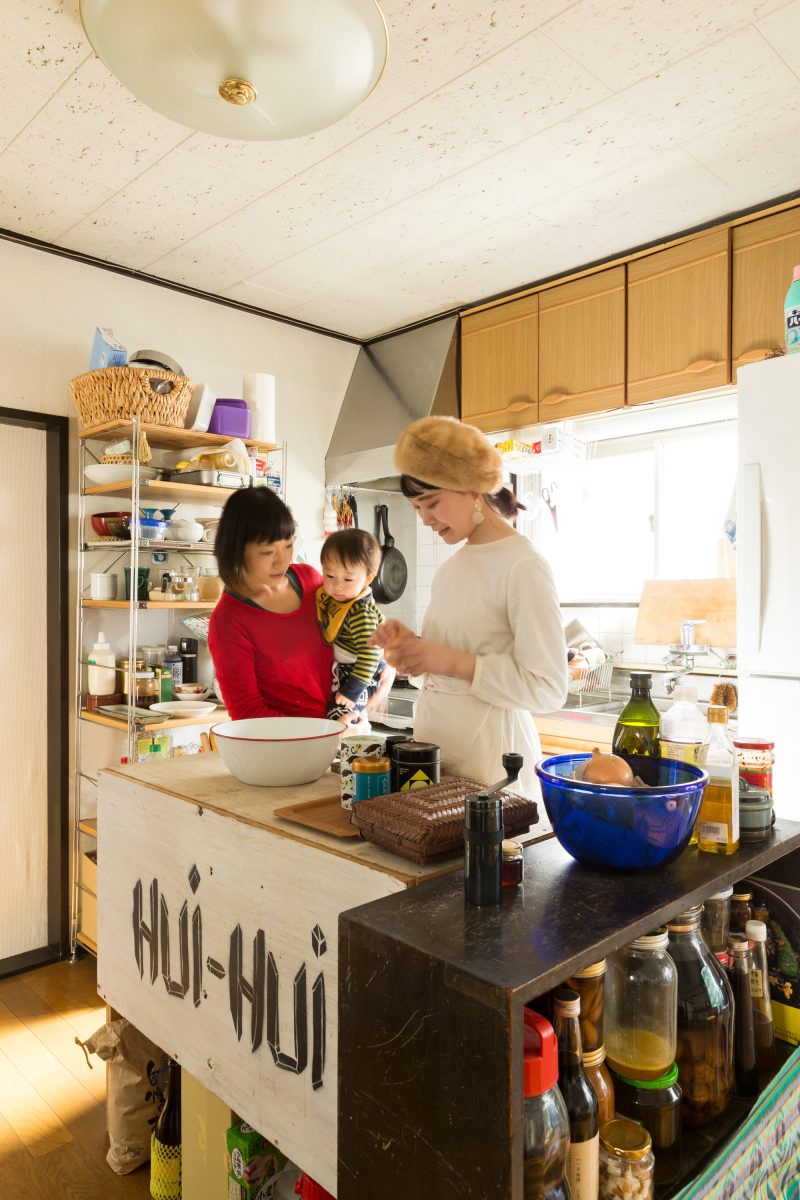 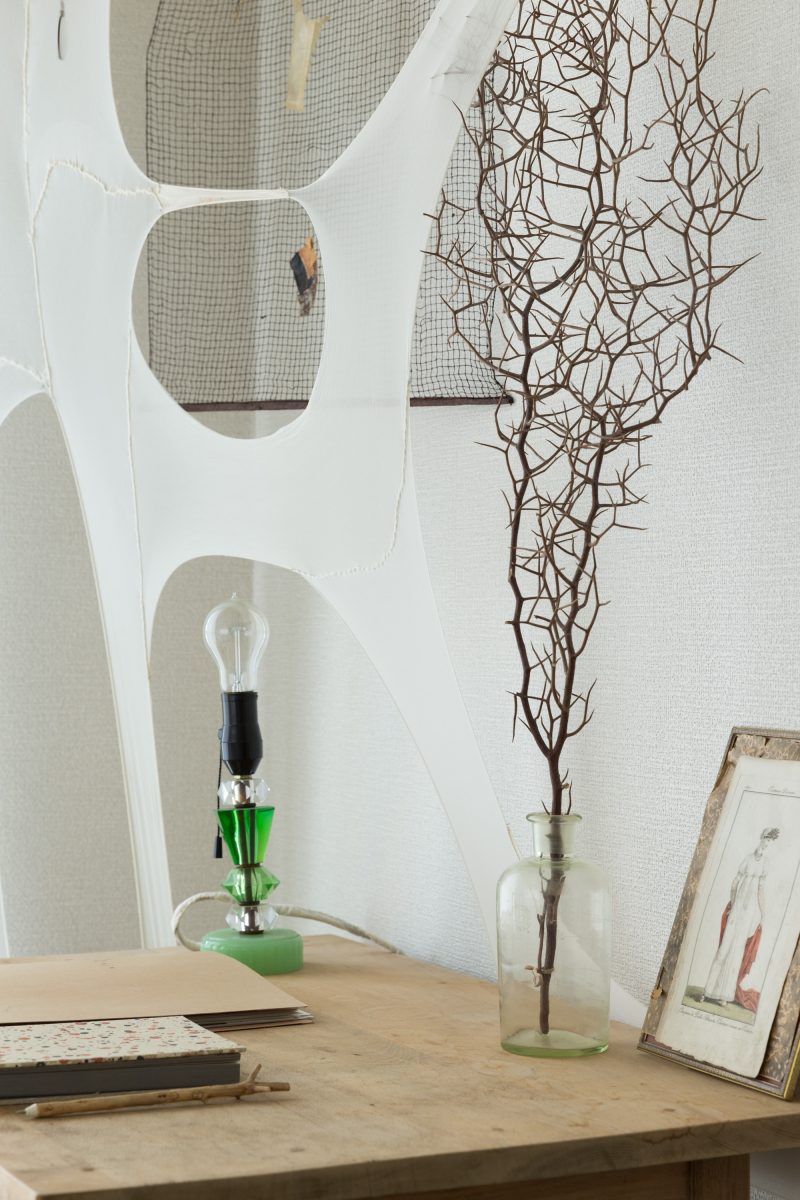 Yumi is a regular visitor to the house and all the housemates connect through their love of art. ‘We like to share books and talk about good exhibitions because all of us like art and culture,’ says Haruna. Sitting down at the dining table next to the kitchen with Noriko’s gyoza or Hiroshi’s nabe (a Japanese hot pot dish) is where they come together to share their artistic aspirations with one another and hopefully dream up their next beguiling exhibition.

Thank you for letting us peek into your ‘maja’, Haruna and Hiroshi and Noriko and Yuri! And a warm thank you also to Emily for sharing with us one of the amazing stories from her book Shared Living: Interior design for rented and shared spaces, published this month by Thames & Hudson.

Emily Hutchinson has been writing about home design for several years. She is an expert on shared living, having inhabited many a shared home from Sydney to New York. She currently lives in a share home in Melbourne.

View all stories by Emily Hutchinson

Welcome to Issue 2 of Assemble Papers in print. This edition is inspired by Melbourne’s new public architecture commission, MPavilion – initiated by the Naomi Milgrom Foundation – with Sean Godsell’s inaugural form soon to be revealed amidst the lush foliage of Queen Victoria Gardens.

With their research-based practice spanning installation, performance, mapping and video, London-based spatial practitioners Cooking Sections (a.k.a. Daniel Fernández Pascual and Alon Schwabe) are dedicated to exploring intersections between visual arts, architecture and geopolitics through the lens of food – just don’t call them foodies.

West Space: beyond the walls

With this year’s fundraiser just around the corner, Assemble Papers Editor Rachel Elliot-Jones met with artists Brigit Ryan and Akira Akira, along with West Space Director Danny Lacy, to talk about what it’s like to work within the unique John Wardle-designed space; how – despite its very special digs – West Space as an organisation transcends the walls that contain it; and why it’s important to support

We're gearing up for the second instalment of our live EARS series at MPavilion, happening on Friday 16 December and soundtracked by Melbourne-via-LA musician Chela and Melbourne DJ Millú. To get us in the mood, we asked Millú to share a mix that manifests her signature, genre-hopping style of esoteric rhythms and jams from around the world – this is the result.