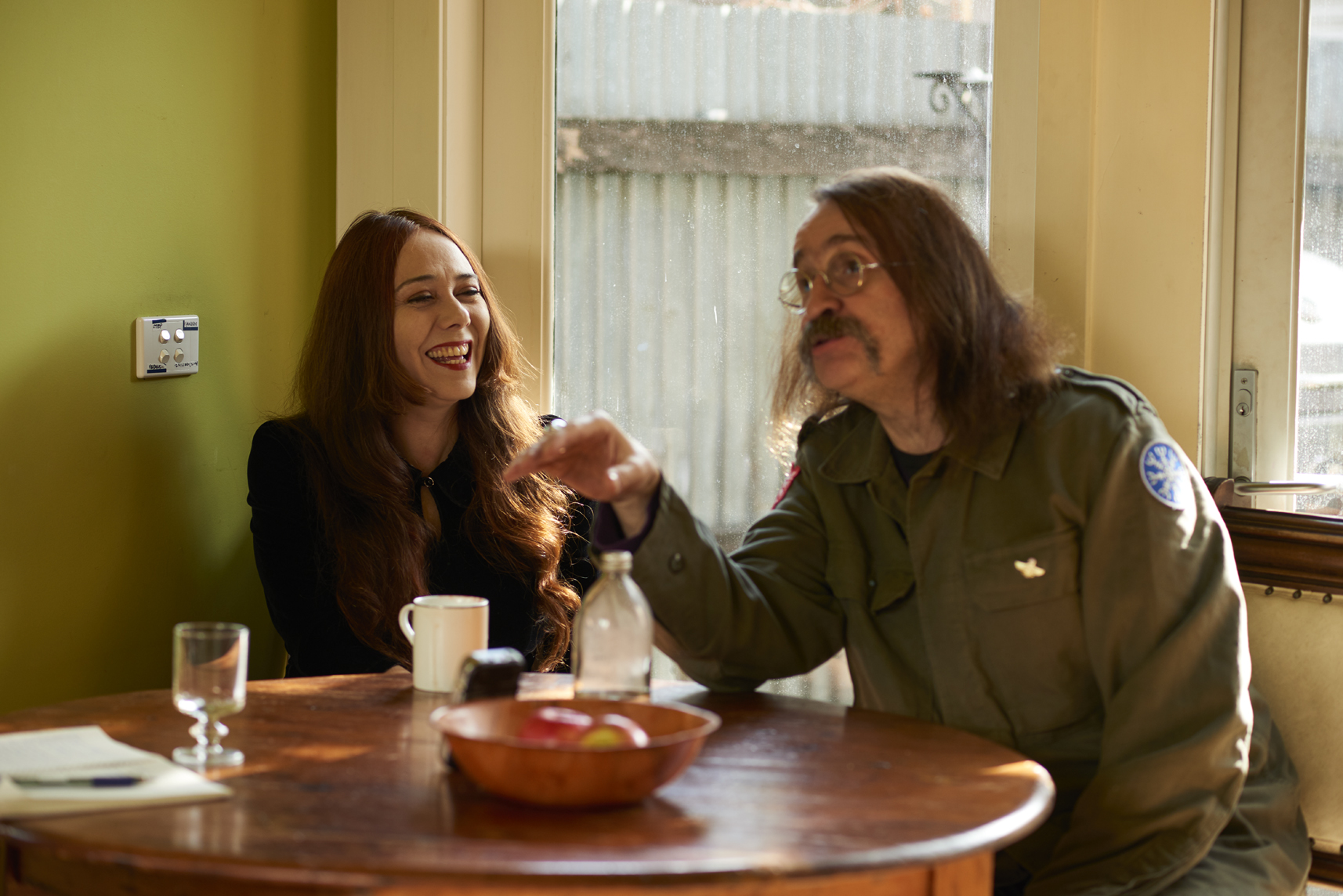 Danielle de Picciotto and Alexander Hacke, who perform as hackedepicciotto, are legends of Berlin’s independent music scene. They share their experiences, and what they have learnt from living on the road with Cat McGauran.

Since 2010, musicians and artists Danielle de Picciotto and Alexander Hacke have been living a modern nomadic life. They gave up the lease on their five-storey house in Berlin, sold or gifted most of their possessions, and put the few items they chose to keep in a storage unit. What began as a “daring experiment” (that Alexander thought would last 18 months) has become a more personal experience that has changed their relationship to the material world and themselves.

“I think it’s important to say that we weren’t minimal people – we were collectors!” says Danielle with a self-aware laugh. “Our house was full of stuff. I had 3,000 books, we had art that covered everything; things that Alex had collected from tours, things we’d collected together. We had a guest room, an office, recording studio, a studio for painting – we had everything.”

Individually, Alexander and Danielle are both highly accomplished – Alexander as a musician, and Danielle as a musician, writer and multimedia artist. American-born Danielle came to West Berlin in 1987. She soon became the lead singer of Space Cowboys and co-founded the Love Parade, which aimed to bring out into the open new music made (literally) in Berlin’s underground spaces. Born in West Berlin, Alexander immersed himself in the underground music scene as a 14-year-old. At 15, he was a founding member of the experimental music group Einstürzende Neubauten. Together, Alexander and Danielle’s live shows are incomparable. Their intense performances create an enclosed, dream-like sensory universe, that combine music, spoken word, visuals and throat singing.

So why did they decide to do this? Living in West Berlin in the 1980s was a formative time for both, and highly influential in their later decision to take this step. “West Berlin was like an isolated village. There was a real sense of solidarity between people,” says Alexander. “It was an extremely creative and special time. Everyone was in many bands, making art, people made their own clothes.”

Born into a US army family, Danielle spent most of her childhood moving around. Berlin was the first place, she says, where she really felt a sense of home. It was cheap to live there, which meant more time to work on creative projects: “My first apartment was 35 German Marks a week [USD$15] for 600 sq feet [55 sqm]! You could work at a café once a week, and live easily. Everybody was in it together – there was no competition, it wasn’t dangerous, trendy or fashionable; no one was dictating what anyone should do. It was like a paradise.”

When the Berlin Wall came down in 1989, life started to change. By 1995, Danielle noticed that industry and commerce brought in a new sense of competition: “Having the opportunity to be yourself is really important. Suddenly, people had to start earning a lot more money to survive. Friends were competing for the same jobs and couldn’t dedicate as much time to their creative practice. That sense of solidarity, that was so strong in West Berlin, started to disappear.” Witnessing that change was one of the most important experiences in Danielle’s life: “I realised that it was all because of money – the creativity in Berlin, which the city is known for, came out of an era where people didn’t have to be competitive.”

As the Berlin they knew increasingly resembled a standard capitalist city, they experienced a growing sense that the city they loved was disappearing and they no longer fit in. In 2010, the urge to leave became so strong that they enacted the idea that planted its seed nearly 20 years earlier. At first, they were simply looking for another place to grow roots. But 18 months in, they had not yet found the place they were looking for, and realised that the real transformation was taking place within themselves – their relationship to the material world was changing. When they went back to their storage unit, they got rid of another 50 percent of their possessions, already significantly pared down when their adventure began. “Getting rid of your material belongings and attachments is a very interesting process,” says Alexander. “It makes you realise how much of our precious lifetime we spend working for money to spend on stuff – items that we are then responsible for, that start to weigh us down. From a young age, we’re taught to think that by earning money and acquiring things we are liberating ourselves, but it’s quite the opposite.”

For Danielle, the process is akin to un-learning 40 years of conditioned behaviour, forcing you to go back to basics and think deeply about what is important. “Being restricted to two suitcases, you can only afford to take the things that are really meaningful to you,” she says. “You realise how easily we’re distracted by things that are totally unimportant – smoking, drinking, drugs, meat. All these things distract us because they’re such strong sensual influences. Most of them, however, are created by large industries to manipulate us into buying things.”

The experience has also made them acutely aware of how significantly the housing market impacts people’s lives. “We’ve been moving around so much and seeing all these cities across Europe and the US being affected by gentrification”, says Danielle. “It’s happening everywhere. [Property owners] have realised that they can raise the rent and nobody can do anything about it, because everyone needs a house. You can make food expensive, but people can grow their own food or find cheap food somewhere. There are always little escapes. But you can’t do anything about housing.”

Even before they were nomadic, Danielle and Alexander spent much of their time on the road, because many of their commissions and performances were outside Berlin. Alexander believes this shaped his relationship to ‘stuff’. “With so much travelling comes a feeling of being uprooted. I gathered things to decorate or modify my immediate surroundings, in order to feel at home. I would buy stuff on tours to set up in my hotel room, to have a little safe space. That is also something that had to change, because now we don’t have that place to come back to.” He acknowledges that he has not fully overcome this system and its mindset just yet, but is pleased to be on the way. He also points out the relationship between the words ‘habit’ and ‘habitat’: “We live in our habits” he says, intuitively.

Not having a home in the conventional sense has taken some getting used to, and has led to some significant lifestyle changes, especially for two musicians who have lived “the rock ‘n’ roll lifestyle,” as Alexander refers to it. “For the first 18 months everything was an adventure, then things started getting serious,” says Danielle. “Depression set in. We started to worry about what would happen if this didn’t go well.” Now, they work on being balanced within themselves rather than relying on the cocoon of their home full of objects. In 2013, they stopped drinking alcohol. They regularly mediate and practice yoga, and follow a vegan diet. “All these things are very helpful to gain that sense of balance”, says Alexander. “For example, once we would have played a show, and knowing we’d made a certain amount of money, we would spend a large amount of it on an expensive bottle of wine – which gives you a high for a few hours, but it’s not good for your body. And it’s supporting an industry that we don’t want to be a part of.”

While not everyone can or wants to live a nomadic existence, many of the benefits that Danielle and Alexander have gained from living this way – a better understanding of themselves, healthier living – can be done by anyone, anywhere. According to Danielle, the first step is to detach oneself from the symbolism of buying things. “Figure out what is important to you; what you need and what you do not need. Once you’ve done that, you can get to know yourself. Find out what your weaknesses, your problems, your strengths are, and work on those.” They both rightly point out that you cannot change others, but you can always work on yourself. “Knowing yourself gives you incredible strength.”

For Alexander, the starting point is being self-aware, and avoiding distractions like Facebook, emails and text messages – or checking when the next episode of WestWorld is on! “It can be very basic things, like thinking, ‘This is the moment when I would usually drink another coffee – but do I really need another one?’ I had this urge to feel like a kid again, that sense of joy and wonder that they have. They don’t experience a caffeine push. So I stopped drinking coffee and realised how restless it makes you feel.” Danielle agrees that being aware of what you’re eating is very important. “We became vegan because I became very ill after a year of being nomadic, and my doctor told me I had to change my diet. I used to eat a lot of meat and pasta. Then I came to understand that nutrition is about more than just eating – it also relates to the environment and large corporations that control food production. I discovered that how you’re eating affects everything else.”

Danielle and Alexander also recommend little experiments: for example, trying not to use your phone for five days (except for calls) and keeping a diary of your experiences. How does it change your life? Before they stopped drinking altogether, three times Danielle and Alexander challenged themselves to go alcohol-free for 100 days. Stop eating refined sugar and see how you feel; or making a checklist of what you spend your money on, and the companies you are supporting are other suggestions they make. “Checklists on your way of life are invaluable” says Danielle. And the home is the perfect place to start, if you want to make change. “Before you start looking at what other people are doing or looking at the big picture, just look at yourself, and immerse yourself in that moment” says Alexander.

Around the world, particularly in the US, Danielle and Alexander are heartened by the changes they are seeing. “We’re seeing things happening in communities that subvert money-driven systems”, says Danielle. “In Detroit, for example, public gardens have come up everywhere, so that people can get free food, and similar projects are happening in London. You don’t hear as much about this in the news as about all the negative stuff, but if you’re actively looking for it in cities, you can see it.”

A very warm thank you to Danielle and Alexander for chatting with us. You can find out more about their work and touring schedule on their website hackedepicciotto. 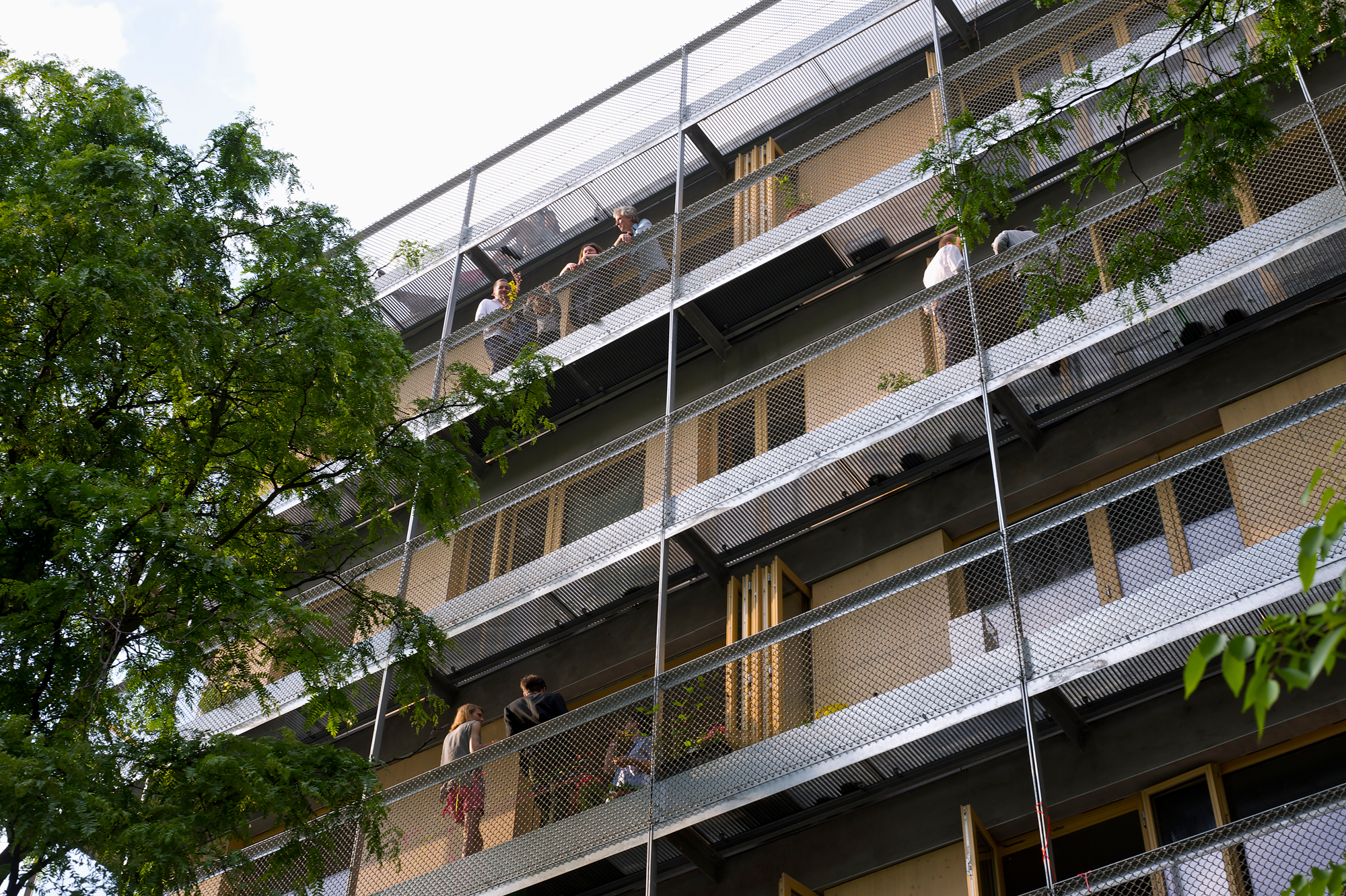 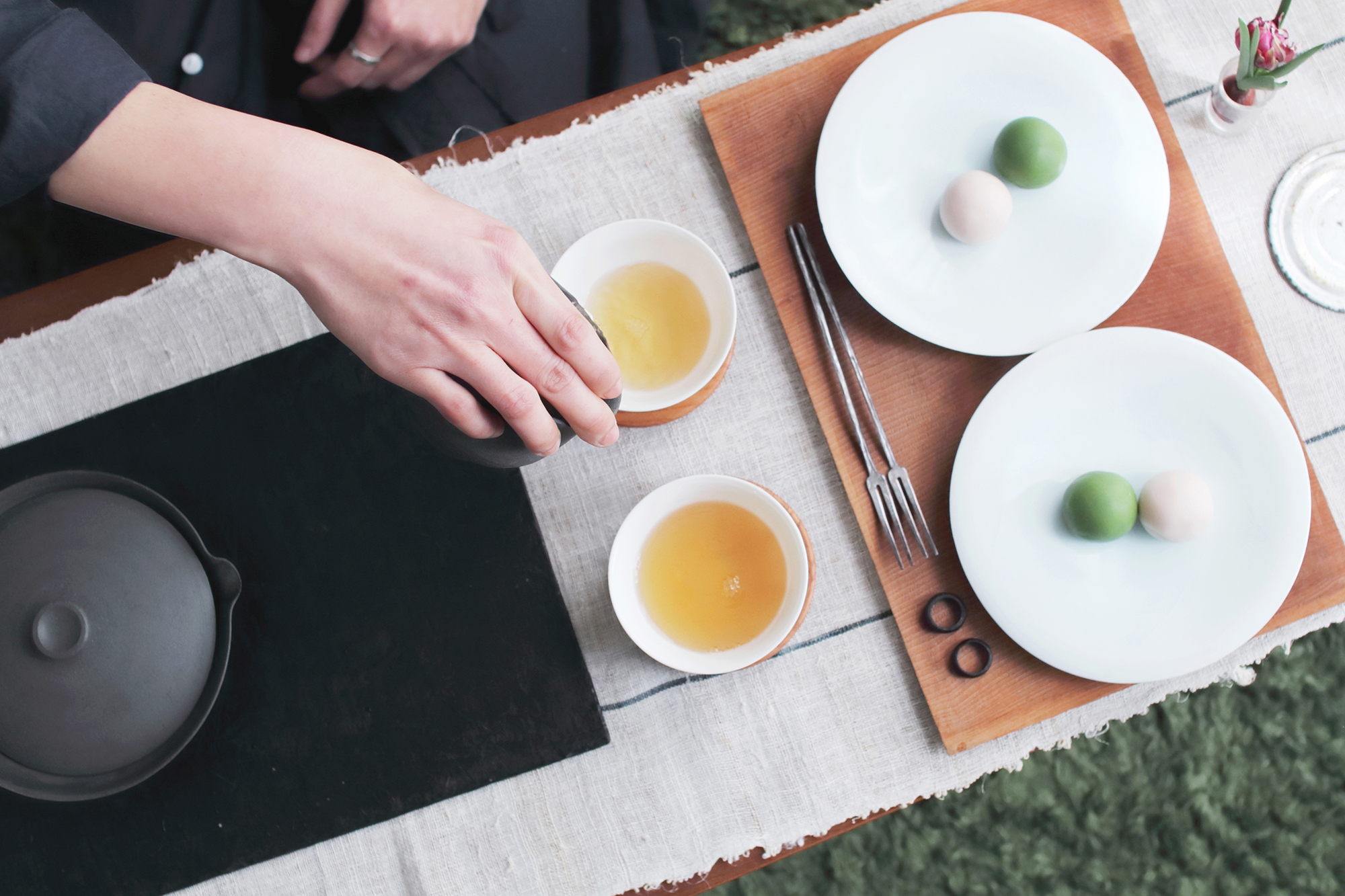 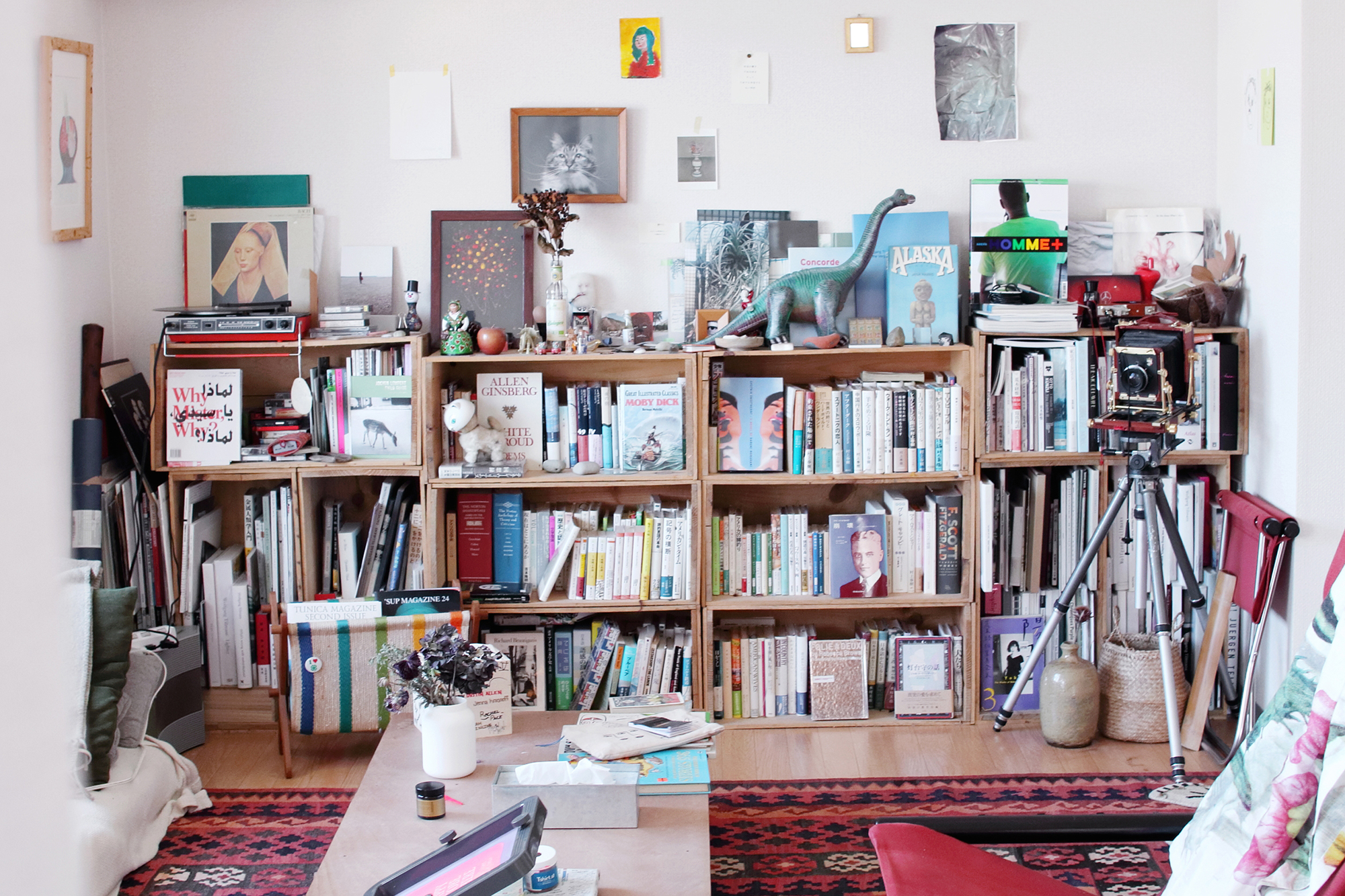