In our second article shared from Future West (Australian Urbanism), a new print publication considering the future of urbanism through the lens of Perth and Western Australia, Brad Pettitt and Peter Newman consider how a WA-based solar project might advance the future of home solar technology, with over one in five households in Perth now generating solar energy.

Solar technology is transforming our cities. Australia now has more rooftop panels per capita than anywhere else in the world, with 1.5 million Australian homes now having solar power systems. Over one in five households in Perth now generate solar energy, making these combined rooftops the largest power station in Western Australia.

There are several reasons for the enthusiastic take-up. Australia enjoys a lot of sunshine; Perth has over 265 days with some sunshine per year. Australians are also early adopters of new technologies. However, the biggest factor may be that the cost of fossil-fuel electricity in Australia is one of the highest in wealthy economies. These costs will continue to rise in Western Australia as the state government subsidy (of almost 30 per cent) inevitably decreases. In contrast, solar PV is rapidly dropping in price – especially now it is being mass-produced in China.

Solar PV plays a key role at the CRC for Low Carbon Living’s White Gum Valley (WGV) Living Laboratory in Fremantle, a unique research and demonstration project led by the WA state government’s land development agency, LandCorp. The project brings together a coalition of actors around the urgent topic of reducing carbon emissions: this is critical in Perth, a city with one of the highest per capita CO2 emissions on the planet. The project participants address this problem through an innovative approach to suburban housing design and construction. Residential housing accounts for over 13 per cent of Australia’s carbon emissions, and in this project, solar PV becomes one of a matrix of strategies to reduce emissions.

The WGV Living Laboratory is 2.29-hectare, medium-density development of 80 dwellings incorporating diverse building typologies (detached houses, town houses and apartments), climate sensitive design, creative urban greening, innovative water management strategies and solar PV. WGV has performance targets of around a 60 per cent reduction in energy use, while carbon intensive mains-water usage is expected to drop 70 per cent across the various dwelling typologies, the result of a suite of initiatives with relatively modest cost implications. 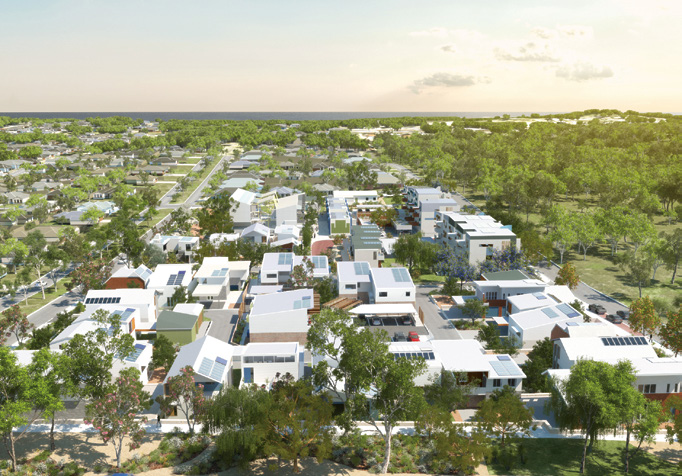 Solar power is key to reaching these targets. It is expected that the dwellings could effectively achieve net zero operational energy status with a combination of adequately sized PV systems and good occupant behavioural practices. It may be slightly more expensive to buy apartments in complexes with solar panels, but in the long term there will be savings on electricity bills (when strata owners pass on savings to their tenants). The WGV project focuses on how to achieve low carbon outcomes, with a view to making them mainstream.

Projects like WGV show that the transition to a more sustainable economy cannot be achieved through policy alone. Experimental demonstration projects are also vital, and must interact with and interrogate policy and legislation to unlock thinking around environmental issues. Demonstration projects can transform the actors involved and produce new knowledge, and provide an opportunity to visualise what a transition to a sustainable economy may look like.

The next phase of solar energy in Australia will include home battery storage, which is now rolling out across the country. Battery storage capacity – just like on our mobile phones – is expected to rapidly increase within a decade, while by 2020 being independent of energy utility companies – or going ‘off the grid’ – may be more cost competitive than staying connected. In WA these factors are contributing to the rapidly increasing uptake of solar energy by individual homeowners. However, local government authorities must lead on solar PV, especially when it comes to multi-residential developments managed as strata developments, which have faced barriers to introducing it. Again, demonstrative projects could be a means to transform policy into a tangible and visible reality while unlocking barriers for stakeholders and citizens alike.

Solar energy is rapidly emerging as one of the easiest and most efficient ways to replace fossil fuels as a source of energy in Western Australia. WGV is likely to be the beginning of a disruptive transformation of energy use and storage in multi-suburban residential developments. Demonstration in the present will ensure a healthy solar future.

This is the second in a series of articles we’re sharing from Future West (Australian Urbanism), a new print publication produced by the University of Western Australia’s Faculty of Architecture, Landscape and Visual Arts. Future West looks towards the future of urbanism, taking Perth and Western Australia as its reference point.

Brad Pettitt:
Before being elected City of Fremantle Mayor in 2009 (and re-elected in 2013), Dr Brad Pettitt was previously the Dean of the School of Sustainability at Murdoch University and was appointed to the Heritage Council of WA in 2014. His expertise includes climate change, international aid policy and sustainability planning.

Peter Newman:
A Professor of Sustainability at Curtin University, Newman sat on the Board of Infrastructure Australia and is a Lead Author for Transport on the IPCC. His books include ‘Green Urbanism in Asia: The Emerging Green Tigers’ (2013), ‘Resilient Cities: Responding to Peak Oil and Climate Change’ (2009) and ‘Sustainability and Cities: Overcoming Automobile Dependence’ (1999), which was launched at the White House in 1999.

Local label founder, podcaster, DJ and more: Xander Byng's talents traverse the musical universe. We bring you a mixtape from the Melbourne-based party-maker, developed as a meditation on psychogeography: “I’ve always found that experiencing unfamiliar settings, especially in a familiar environment, really helps me to think more positively."

If urban planners, developers and local citizens engage on driving density in Perth, they might just find there's a lot of common ground, says urbanist Nic Temov in this article from Issue Two of 'Future West (Australian Urbanism)' – a new print publication considering the future of urbanism through the lens of Perth and Western Australia.

The Internet of Things

New technology and the emergence of the “Internet of Things” is leading the way towards a connected future where seeing and controlling your energy use will be as easy as checking into Instagram. Tim Riley asks, what is this Internet of Things? And how will it make it easier for us to better manage our energy use and reduce our impact on the environment?

Berlin-based architect Kristien Ring speaks with Geoffrey London about the German phenomenon of apartment-building design and development driven by citizens. It's the latest instalment in our series of articles shared from 'Future West (Australian Urbanism)', a new print publication considering the future of urbanism through Perth and Western Australia.