De Ceuvel: from concept to community

Sascha Glasl, director of the Amsterdam-based architectural office space&matter, has little interest in waiting around for architectural commissions to come his way. He sees architects as instigators, concept developers, community formers and facilitators. Since launching space&matter in 2009, Sascha and his co-founders have built up both a collection of spatial ideas and creative ways to have them implemented. Their interest is in taking an idea and turning it into a working concept: bringing together the right team and the right organisational and financial structures to ensure project longevity – designing more than just the architecture. This active approach has led to interesting, socially engaged projects and collaborations that would otherwise have remained unrealised. One such project is De Ceuvel (pronounced di ker-vel), a new community of sustainable studio spaces in a former shipyard in Amsterdam’s north. Katherine Sundermann speaks to Sascha Glasl about turning ideas into urbanism, architecture and action. 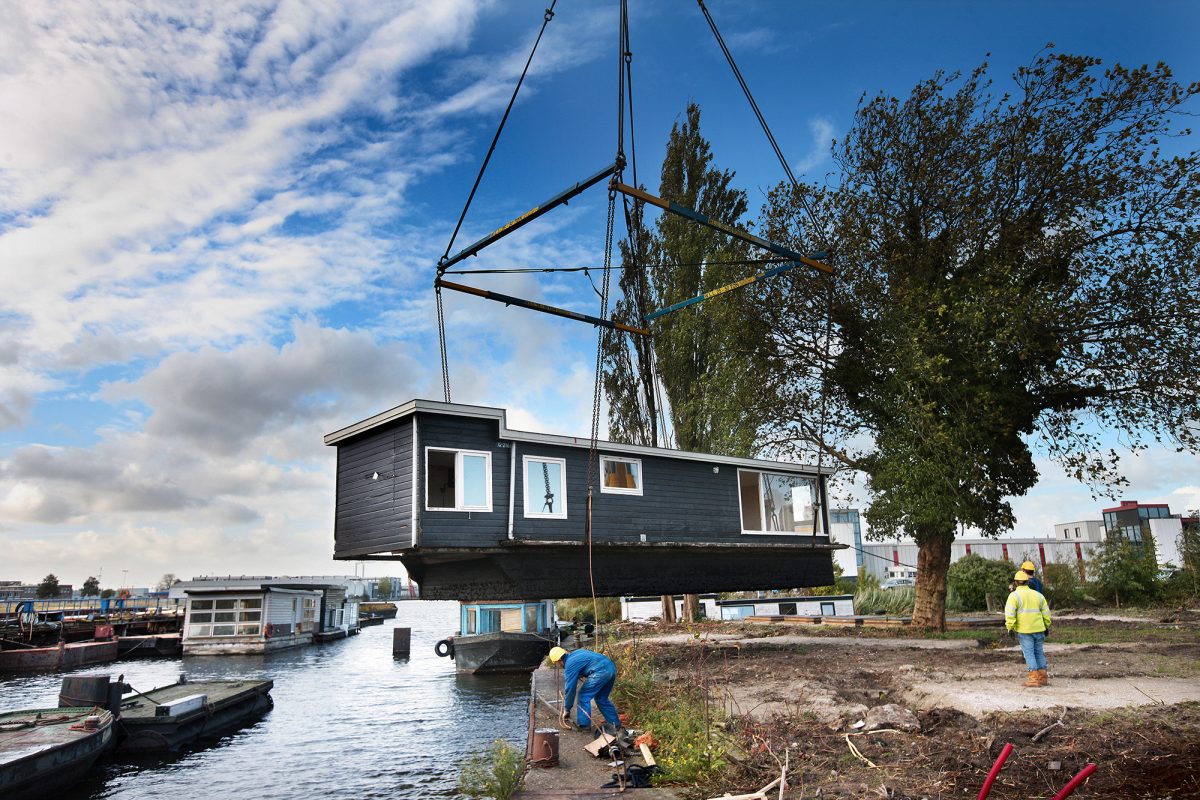 A renovated houseboat is lifted ashore at De Ceuvel. Photo by Jean-Pierre Jans.

The De Ceuvel project was born when a few loose ideas and conversations came together into a competition entry. A group of artists wanted to build their studios on an area of contaminated land in the harbour of Amsterdam and the City of Amsterdam was willing to give it to them for 10 years. Sascha had learnt from his involvement with ‘Schoonship’, a project for a floating sustainable community, that in Amsterdam, second-hand houseboats are practically free – no one wants them. space&matter (together with DELVA landscape architects and METABOLIC sustainable systems consultants) had the idea to combine the two – remediate the contaminated land with plants and vegetation ­– before placing the retrofitted houseboats back on the land with a new life as ateliers to local artists and small businesses.

I was lucky enough to be there on the wintry Amsterdam morning when the houseboats were lifted out from the harbour onto dry land. A little community of artists and designers had already formed around this project and some of them were gathered on the canal bank handing out champagne. Houseboats in various states of disrepair waited to be lifted from barges onto the former industrial land. This was only days before a disastrous storm hit Amsterdam, but Sascha reassured me later that they “only lost one roof”.

When I visited the following summer, the muddy field had been transformed into a wild garden on the harbour. Café de Ceuvel is at its heart, a ramshackle pavilion of recycled materials from the port serving organic food sourced from local farms and the café’s own roof garden. The terrace was full of Amsterdamers making the most of the summer sun – at other times, it acts as a stage for concerts, seminars and movie screenings. 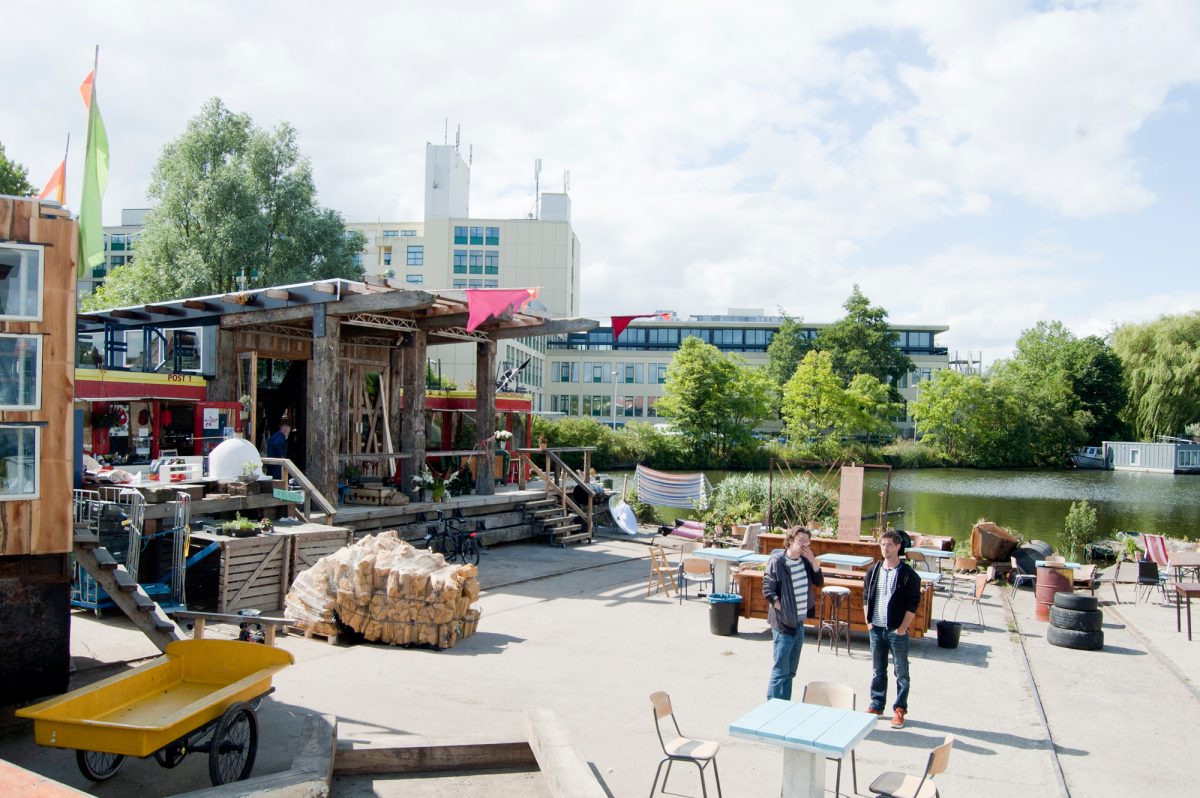 Summer hang out space: the stage functions as a venue for live music, art and performances. Photo by Martin van Wijk.

As you move further through the site, you encounter more houseboats floating in an undulating sea of soil-cleaning plants. A boardwalk snakes through the weeds and grasses, with timber planks leading to the doorway of each boat. Architects, artists, photographers, designers and sustainably-minded start-ups form the community of diverse, but like-minded de Ceuvel inhabitants. space&matter also have a lasting presence on the site through their multifunctional space Crossboat, hosting workshops, meetings, film screenings and private parties. This space comprises one long boat cut down the middle and rearranged to form a cross. Initially, it functioned as a timber workshop: space&matter teamed up with a boat builder to construct many of the interiors of the refurbished houseboats from here. 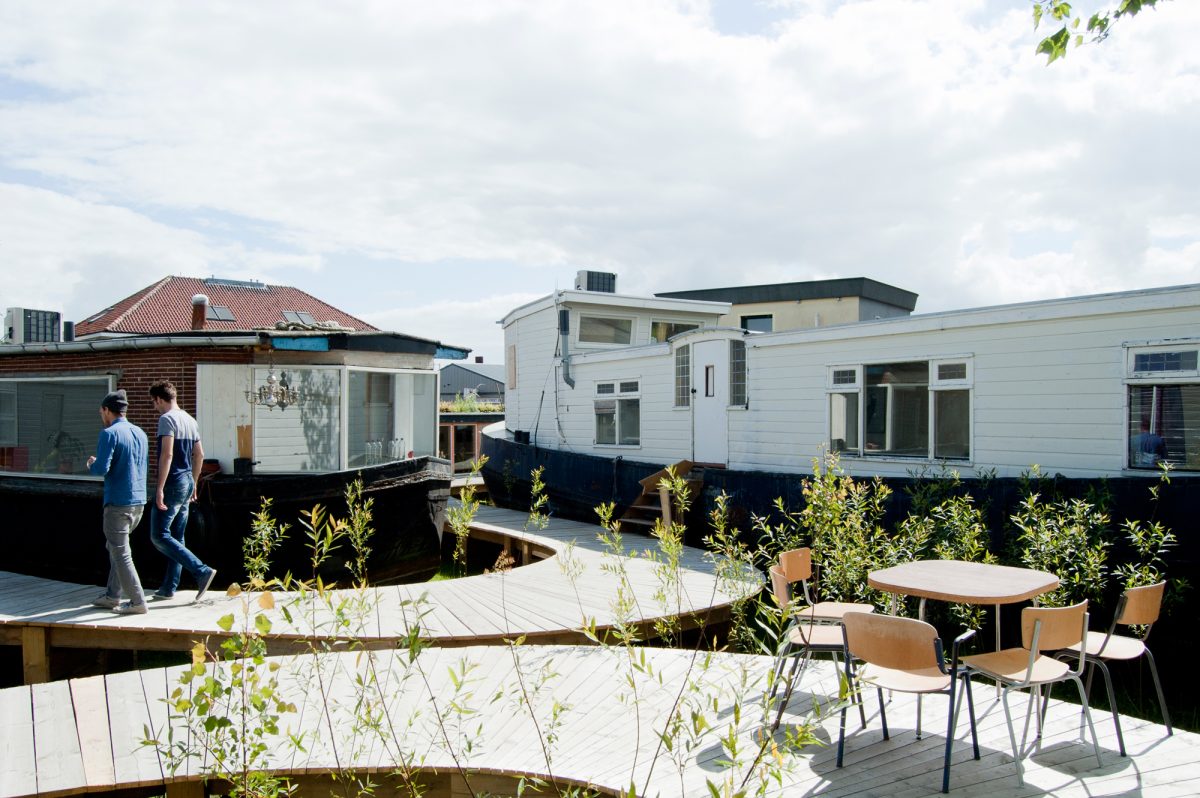 While space&matter were one of the initiators of the project and handled the project management (and drew up the urban plan, negotiated with the municipality, designed some of the boat interiors and even worked on the financial model for the project) – it is clear that De Ceuvel is the result of a team effort. The success of the project relies heavily on assembling the right team of architects, landscape architects, sustainability experts, financial advisors and future tenants. A small board was formed, tasked with overseeing the complex and changing issues that the project team faced throughout the project’s design and construction, and ultimately in its ongoing operation.

Sascha also makes it clear that it was the special conditions present in Amsterdam that made this project possible. In contrast to many bottom-up initiatives that struggle against regulations and restrictions imposed by local government, this project came out of a competition run by the City of Amsterdam. Sascha believes this project is combination of top-down and bottom-up processes, with the municipality creating a framework for the project while helping to facilitate it at arms length. As a result, the project team had a lot of freedom and were able to deal with restrictions in non-conventional ways, allowing the project to come together quickly and fruitfully. 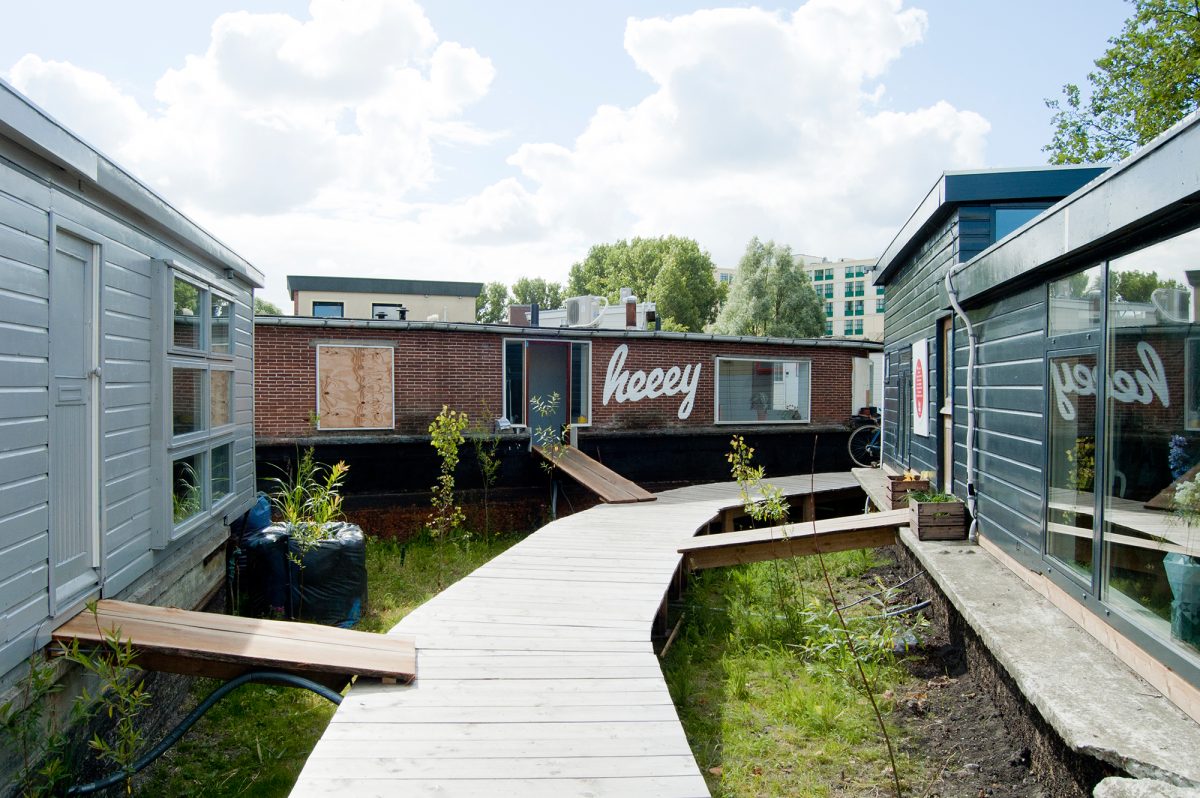 This project is one of many in which space&matter take a clever idea and develop it into a working concept and project. Sweets, an idea for a ‘distributed’ hotel concept using the existing, and largely obsolete brugwachtershuisjes (little control rooms for the person tasked with opening and closing the bridges) that are scattered along Amsterdam’s canals has been eagerly snapped up by the Lloyd Hotel Group. WeBuildHomes, is another, fully functioning space&matter concept – an online platform that allows architects to sell their sustainable and affordable house designs directly to prospective house hunters.

At a time when many Dutch architecture offices have shrunk due to the ongoing Eurozone financial crisis, space&matter have in fact grown, now employing over 20 staff. And early on, while staff initially invested a lot of their own pro-bono time into the development of these ideas, the practice has now reached a point where it is recognised for its ability to turn good concepts into working reality (and can charge appropriately for its expertise).

As for De Ceuvel, the project recently celebrated its first birthday and is now both a buzzing community and cultural destination in the up-and-coming area of Amsterdam Noord. Sascha tells me that when their lease is up in 9 years time, the site will be completely remediated, the boats will be put back on the water and they won’t leave a trace. And, if everyone is still ‘on board’, the team will find another contaminated harbourside site – and start the whole process all over again.

Many thanks to Jean-Pierre Jans, Martin van Wijk and particularly Adam Nowek for images. And thanks to Sascha Glasl for sharing his experiences as one of the key ‘captains’ of this unique form of houseboat urbanism. To learn about and view more of space&matter’s work, visit: spaceandmatter.nl

A bevy of bicycles in the entrance to De Ceuvel, a collective of artists and small businesses bringing culture and community to a disused site in Amsterdam North. Photo by Adam Nowek.

Recycled planks on the exterior of one of De Ceuvel’s studio spaces. Photo by Adam Nowek.

The curved recycled timber bow of one of De Ceuvel’s houseboat studios. Photo by Adam Nowek.

Each of De Ceuvel’s studios has individual quirk and character. Photo by Adam Nowek.

A bevy of bicycles in the entrance to De Ceuvel, a collective of artists and small businesses bringing culture and community to a disused site in Amsterdam North. Photo by Adam Nowek.

Recycled planks on the exterior of one of De Ceuvel’s studio spaces. Photo by Adam Nowek.

The curved recycled timber bow of one of De Ceuvel’s houseboat studios. Photo by Adam Nowek.

Each of De Ceuvel’s studios has individual quirk and character. Photo by Adam Nowek.

122 Roseneath St was completed in 2018 by Fieldwork Architects: the first building developed by Assemble, serving as a testing grounds for the company's ethos and philosophy. Introducing the first of our two-part special on the small footprint project close to our hearts, this week we visit one of the architects on the project, who now lives on this address.

Kate Rhodes is co-curator at RMIT Design Hub, a purpose-built space dedicated to design thinking across research, exhibition and critique. When not striding the halls of the glacial Sean Godsell/Peddle Thorp building, Kate observes a cycle of a very different nature: the seasonal changes of her 8m2 kitchen garden plot at the North Fitzroy Community Rushall Garden. Here, Kate shares her gardening tips.

Artist’s Yandell Walton and Lauren Dunn live in an art-filled warehouse in Collingwood with their two whippets, Sanchez and Desi. Emma McRae speaks with them about how Collingwood has changed over the years and how they managed to transform an empty warehouse space, into a plant-filled sanctuary for a community of artists.