Worldwide, our treatment of asylum seekers and refugees leaves much to be desired. As the Guardian’s Ian Traynor writes, “immigration is one of the most toxic and incendiary topics in the national politics of so many countries… ‘European’ immigration policy is a mess, a patchwork of 28 hugely varying national systems constrained by national politics, shaped by culture and history”. As Julian Burnside notes, our own reputation internationally is one of “tiny hearts” and “balls of steel” thanks to the Abbott government’s hardline approach to asylum seekers and our detention of men, women and children. As hopeless as it might seem on a global level, at a local level, collectives such as Berlin’s CUCULA: Refugees’ Company for Crafts and Design are countering the hostility through collaborative design. Eugenia Lim speaks to co-founder Corinna Sy about crafting a culture of welcome. 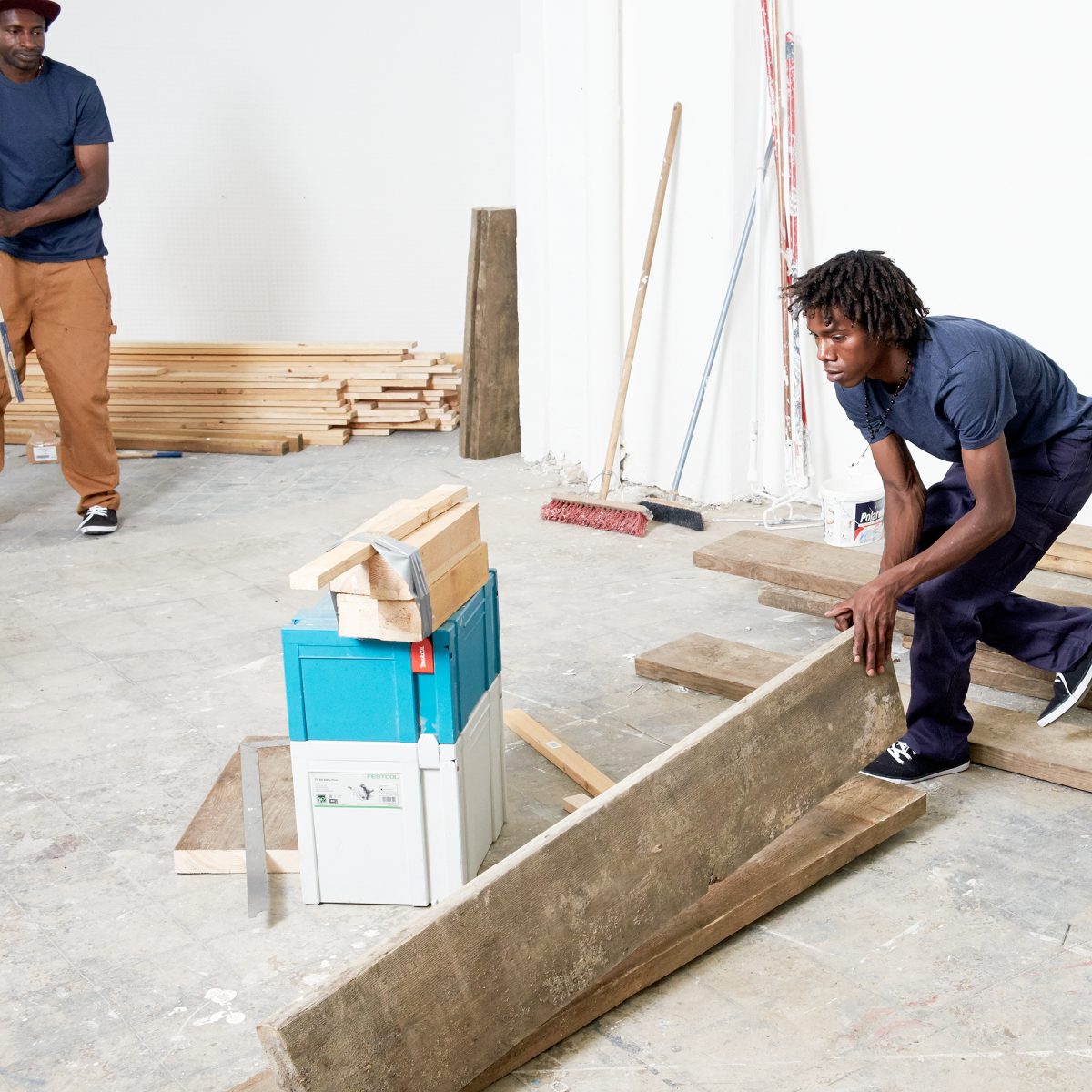 According to the UNHCR, in 2012, the number of people displaced by persecution and conflict was an estimated 45.2 million: 28.8 million internally displaced persons, 15.4 million refugees and 937,000 asylum seekers. In late April, over 900 asylum seekers lost their lives when their 20 metre-long fishing boat capsized 177 kilometres south of the Italian island of Lampedusa. Italian Prime Minister Matteo Renzi called for an emergency summit of EU leaders, stating, “it has to be a priority. We cannot remain insensitive when every day there is a massacre in the Mediterranean”. Our identity is shaped not only by those who we welcome into our country, but by the treatment of those who we leave out at sea.

As hopeless as it may seem on a macro level, at a micro level, there are signs of a heartening trend – the formation of small, grassroots collectives who aim to empower those they work with to transcend the narrow categorisation of ‘refugee’ – to achieve self-determination in their new country. Here in Australia, The Social Studio, the Welcome Committee and the Asylum Seeker Resource Centre are some notable organisations bringing hope and purpose back into the lives of some of the most vulnerable yet resilient members of our society. Halfway across the globe, a kindred project is shaping the future of a small group of refugees in Kreuzburg, Berlin. 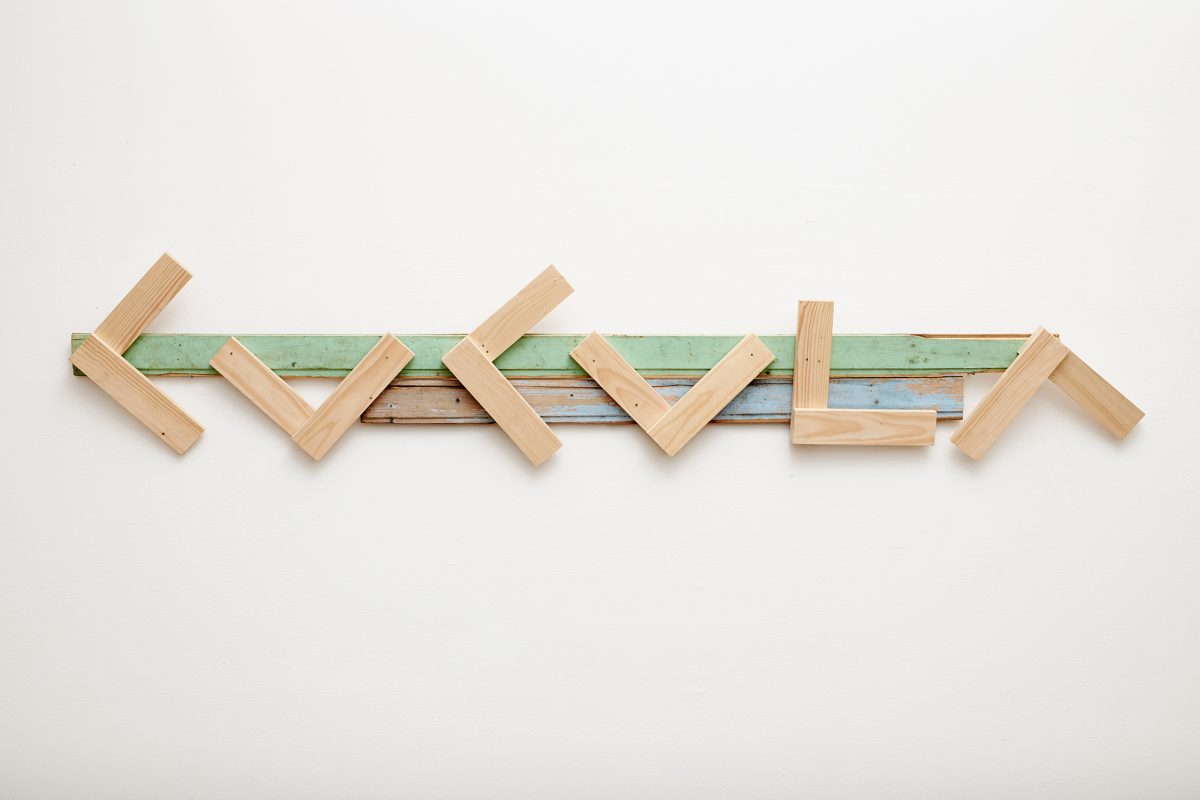 32 year-old German-born designer Corinna Sy is one of the co-founders of CUCULA, an association, workshop and place of learning that works with refugees to ‘build their own future’ through the crafting of premium-quality furniture. ‘Cucula’ comes from the Hausa language in western-central Africa, and means ‘to do something together’ or ‘to take care of each other’. Launched as a pilot in late 2013, CUCULA was founded in the wake of the government-led dismantling of Oranienplatz, an ad hoc refugee protest camp in Kreuzberg, Berlin. Moving quickly, Schlesische27, a local gallery, installed a ‘shelter against the cold’ for five displaced young men from West Africa. Corinna joined her friend, product designer Sebastian Daeschle, in working with the men to make furniture for their makeshift rooms at the gallery, until, as Corinna recalls, they said, “we are refugees, we don’t need things for ‘interiors’ – we don’t know where we will be tomorrow”.

“We started working with these guys and then we realised the dramatic situation they are in – that there are no answers, no solutions – they are completely in a parallel world with no way to break that circle. On the one hand, there is this huge complex discussion, really theoretical; and on the other, these are real people with personalities and potential – and they are not allowed to do anything”. Rather than getting mired in the toxic political debate around immigration and asylum policy, Corinna and the CUCULA team initiated a quick, active response to the burgeoning crisis. “[CUCULA] is actually a utopia… since these guys are not allowed to work or earn money, we’ve turned it around to imagine a refugee-led company and what that might be. We began from this point”. 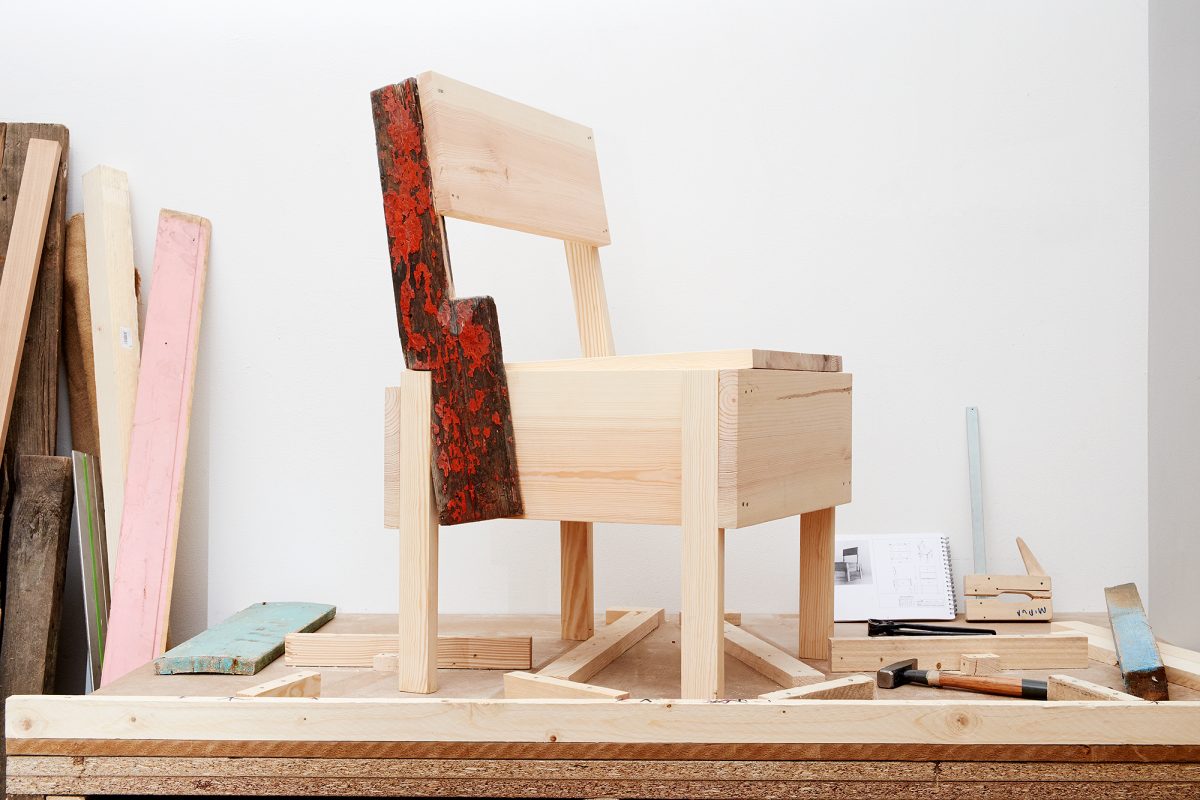 One of the much-coveted Ambassador chairs, constructed partly from driftwood sourced off the coast of Lampedusa. Photo by Verena Bruning.

As a non-profit company, the proceeds from the sales of CUCULA pieces are invested directly back into the education and cost of living for the 20-plus refugees involved in CUCULA’s programmes. Over the course of a one-year cycle, five furniture ‘trainees’ work half-a-week in the CUCULA furniture workshop before joining another 15 refugees for the rest of the week in undertaking basic German language and education classes. In a beautiful yet shrewd fit, the renowned and influential socialist designer Enzo Mari’s 1974 book of utilitarian DIY furniture Autoprogettazione, provides the blueprint for CUCULA’s pilot collection of premium, sustainable pinewood furniture. The CUCULA model demonstrates that it is possible to advocate for both social good and good design – recent showings at the Cologne and Milan Furniture Fairs and Berlin and Dutch Design Weeks have enjoyed great critical success amongst continental design aficionados. 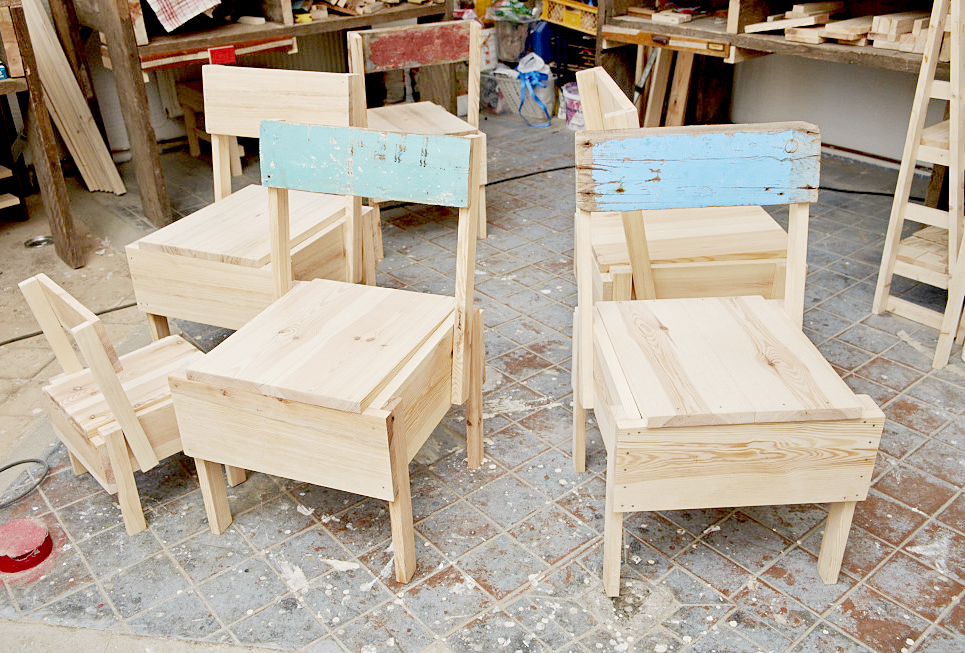 A gathering of Ambassadors. Photo by Verena Bruning. 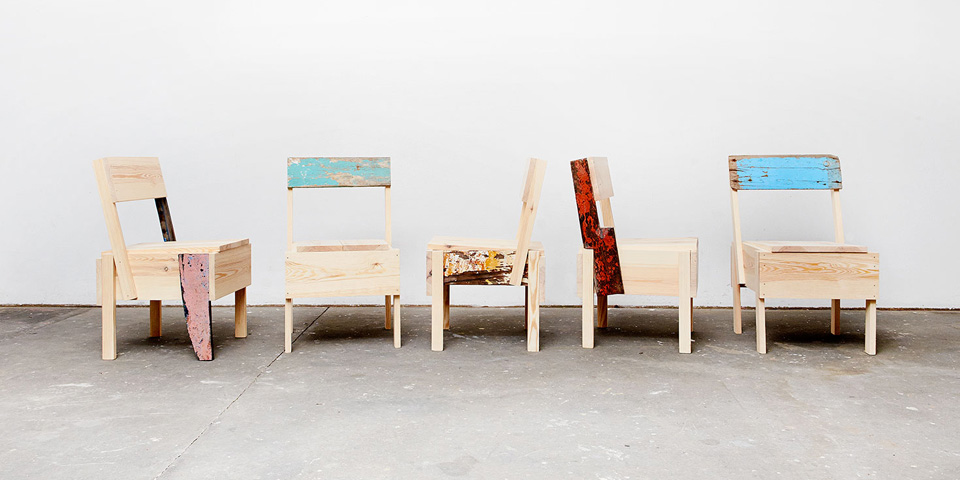 Of particular popularity is the now sold-out Ambassador range, which incorporates driftwood wreckage from refugee boats off the coast of Lampedusa into poignant, bittersweet pieces. As Corinna explains, “it all started because we collected wood from their protest camp. We took some pieces and we wanted to integrate the wood to tell their stories, through the material. The guys really hated the idea at the beginning. Malik was like ‘no, this is old wood, it’s bad wood, you don’t want to take it’. I said, ‘just give it a try’. And then we showed it in Milan and everybody was focusing on this furniture, on the old wood… and the guys realised that through it, they were able to tell their histories… ‘this is wood from Oranienplatz. I had a house, I’m a refugee’. Then Malik asked, ‘why we aren’t taking wood from the [refugee] boats?’ At first, we resisted – it seemed too controversial. But in the end, we decided to try it, to see. The guys made a video that we took to Lampedusa (it was too dangerous for them to travel with us in case they couldn’t get back into Germany). We were invited to a conference and we discussed the projects with the people there. [The locals] really liked the idea and said ‘if it’s helping them with their future, go ahead – take something’. We collected the wood with the people from the island together and we sent it FedEx to Germany, from this ‘boat cemetery’. We want to keep [the Ambassador range] limited edition because it is very strong and controversial… but so many people are still asking for this furniture”.

A quiet corner at CUCULA. Photo by Fred Moseley.

When asked about the career aspirations of the trainees, Corinna says that CUCULA acts as a vehicle, “a space of possibilities”, rather than the endgame. “We had to build up the whole company. It is like our Trojan horse, more or less“. While the five refugees have learnt practical skills, and at least one trainee hopes to continue to work in carpentry, Corinna sees CUCULA as the beginning of a new, self-sufficient life, not just as refugees, but as members of society. Of the current trainees, Malik aspires to become an engineer, Ali wants to study business and Maiga wants to work as a cleaner, his most recent profession while living in Libya. Wood, craft and design act as the time being as tools for self-empowerment, tactile means for the trainees to “figure out what kind of perspectives they can build on their own, or what chances they would have in the German system. And also to bring them back into a structure. They’ve been refugees for six or eight years. In that time, they’ve never had the chance to ask themselves ‘what are my interests? What am I good at? What are my chances here?’ 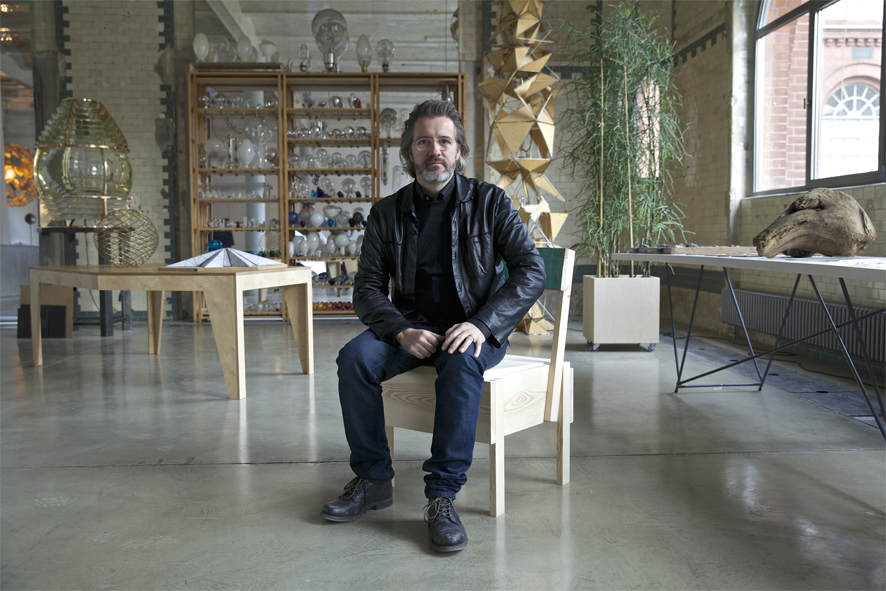 The project has attracted some high profile ‘ambassadors’: from artist Olafur Eliasson to choreographer Sasha Waltz and Dieter Kosslick, the director of the Berlinale Film Festival. Having activated the city’s grassroots community around its pragmatic and humane approach to refugee resettlement and employment, Corinna and the team now hope the support of Eliasson, Waltz and those in the upper echelons of society and culture will provide the government with an unequivocal argument – that Germany can benefit socially, economically and pragmatically – from the CUCULA model. Enzo Mari himself endorses from afar.

When asked about her own experience of working and collaborating with refugees through CUCULA, Corinna feels she has learnt as much as she has taught. “Working with these guys – we are family, we are friends, we are work, we are everything. These guys, they don’t have much hope beyond the project, of staying in Germany. They lost their hope during all those years of being refugees. But they are really trusting us and seeing the value of being together and what it means – sharing time, listening and eating together – all things which are very important for them. What I have learnt through the guys is to not accept things which seem to be a given and to fight for my ideas. And through the whole project, I think I’ve learnt that there is always a way to do it differently… I’ve become braver and more self-confident. To do what you think is right and what you believe in”.

A huge thank you to Corinna Sy. For more information about CUCULA, visit www.cucula.org/en. Photos by Verena Brüning and Fred Moseley.

Malik at work in the CUCULA workshop. Photo by Verena Bruning.

Maiga in the workshop. Photo by Verena Bruning.

Malik at work in the CUCULA workshop. Photo by Verena Bruning.

Maiga in the workshop. Photo by Verena Bruning.

Bo Reudler is a Dutch designer of furniture, objects and interiors who finds inspiration from wanders in the woods. Leading his own Amsterdam-based studio, Bo and his team are in love with both the material and the immaterial – coaxing out the hidden beauty in natural matter, imbuing their mostly timber and bamboo forms with mythology and meaning.

The design work of Enzo Mari, iconic Italian provocateur and octogenarian, is often described as elegant, minimal and functional. Grace McQuilten prefers to think of Mari’s work as puzzling, playful and human. Here she looks back at 'autoprogettazione', Mari's range of DIY furniture and a beguiling body of work that defies mass production and the march of time.

Berlin-based architecture collective Raumlabor sees the city as a space for investigation, participation and endless possibilities. With much of its early work spanning the realm of temporary interventions, these days Raumlabor is turning its focus towards more enduring urban transformations. Emily Wong chats to co-director Christof Mayer about working at the intersection of art and city-making.