Cafés have played an important role in the enrichment of the world’s most cosmopolitan cities since their emergence from the Ottoman Empire in the 17th century. Writer and caffeine drinker Anna Hickey explores the impact of the humble bean on the proliferation of culture, now and then. While empires have risen and fallen and societies evolved, the essence of the coffee house – a space for egalitarian social exchange – remains strong. 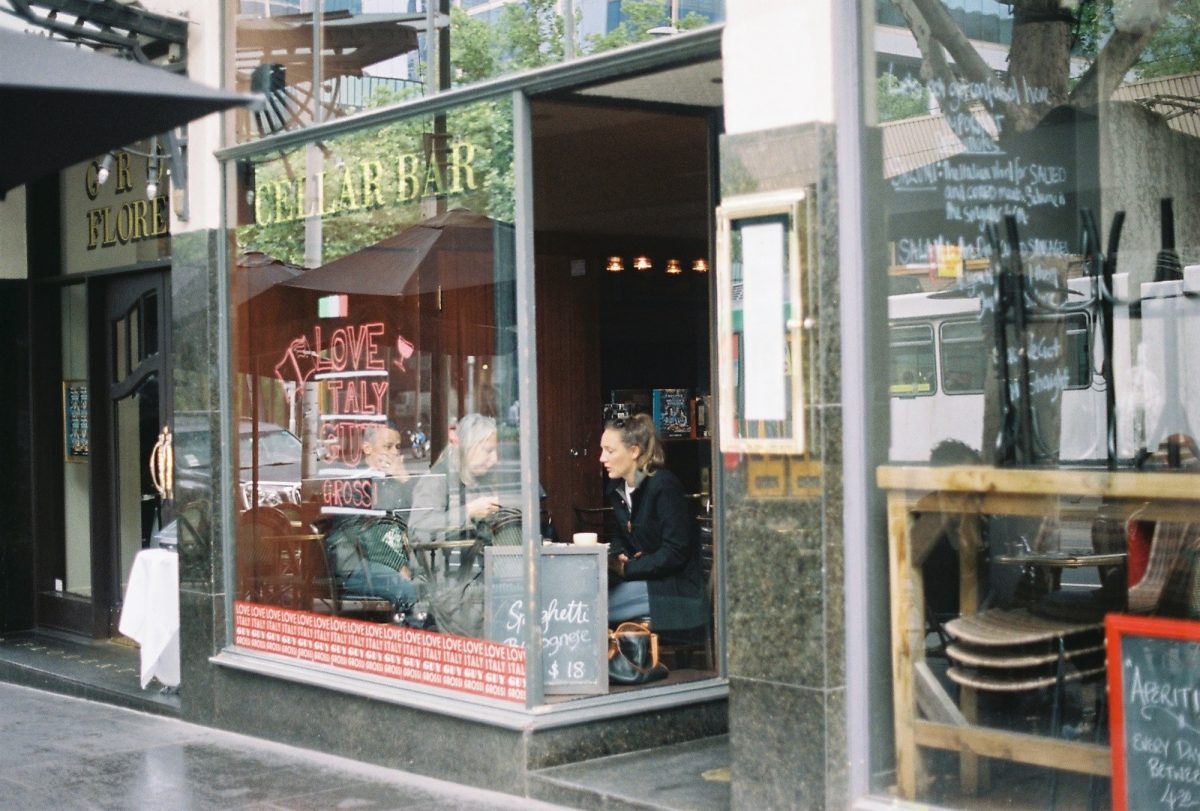 Melbourne institution Grossi Florentino sits in the original site of Cafe Denat, one of the first European-style coffee houses to open in Melbourne in the 1890s. Photo by Nusha Gurusinghe.

If you were to enter a European coffee house in the 17th century, you might have stumbled across scientists, artists and philosophers, swapping ideas while sipping Ethiopian coffee. This was a time of scientific and philosophical discovery (think Isaac Newton and Descartes), with caffeine no doubt stimulating the grey matter of great thinkers of the time. These coffee houses often catered to niche interests, such as politics and philosophy, offering libraries of books, newspapers and pamphlets on specific topics. Picture the cultural leaders of yesteryear nestling themselves into the corners of a café for a good read.

Fast forward to the coffee shops of today – people enter hailing from different places, yet seeking the same nourishment, comfort and sense of belonging from the one space. Like Europe in the 1600s, everyday and important ideas, conversations and decisions happen in coffee shops daily. While there is always vast room for improvement (safer cycling, better public transport and infrastructure), Melbourne (awarded the world’s most liveable city by The Economist Intelligence Unit Survey) is an exemplar of the impact and cultural enrichment of coffee houses on the urban fabric. Cafés play a leading role in our cityscape. According to the City of Melbourne, there are now over 2,190 cafés and restaurants and over 166,000 café seats in the central business district alone. 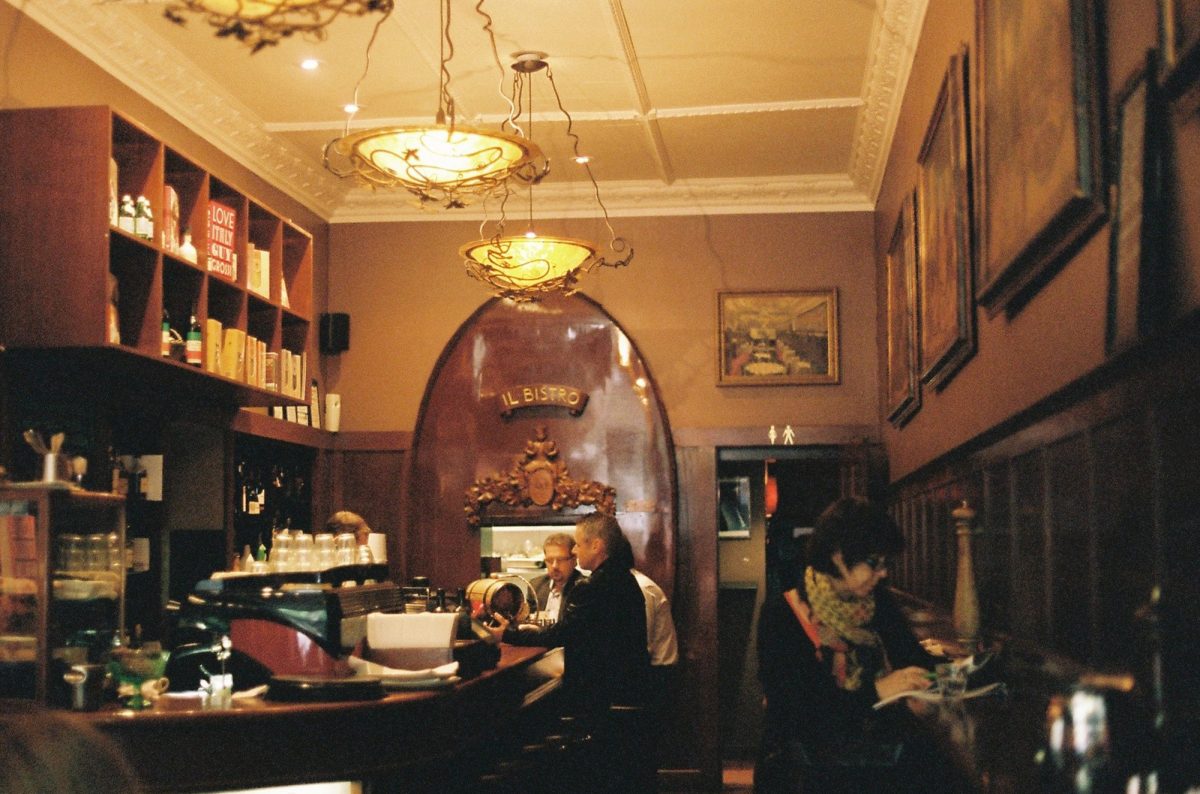 Coffee arrived in Australia with the First Fleet and according to Museum Victoria, the café scene in Melbourne started in the 1890s. Inspired by their European origins, the original Melbourne cafés took on names such as Vienna Café and Café Denat (where iconic Melbourne restaurant Grossi Florentino now resides). Coffee houses really started to boom in Melbourne during the Temperance movement of the 1930s, when community members were encouraged to substitute alcohol for coffee, instead visiting coffee lounges for ritualistic caffeine-fuelled social gatherings.

The inception of institutions like Marios (established in the 1980s) and Pellegrini’s Espresso Bar (set up by Italian immigrants in the 1950s) – and the introduction of espresso machines – really planted the seeds for the now booming Melbourne coffee culture. Local government even recognised the important role cafés play in bolstering community. After the recession in the early 1990s, the government included coffee houses in policy as a tactic to breathe new life into the city of Melbourne. The fact that Melbourne hosted the 2013 International Coffee Expo with over 7000 local and international visitors highlights the important cultural role that coffee and cafés continue to play. 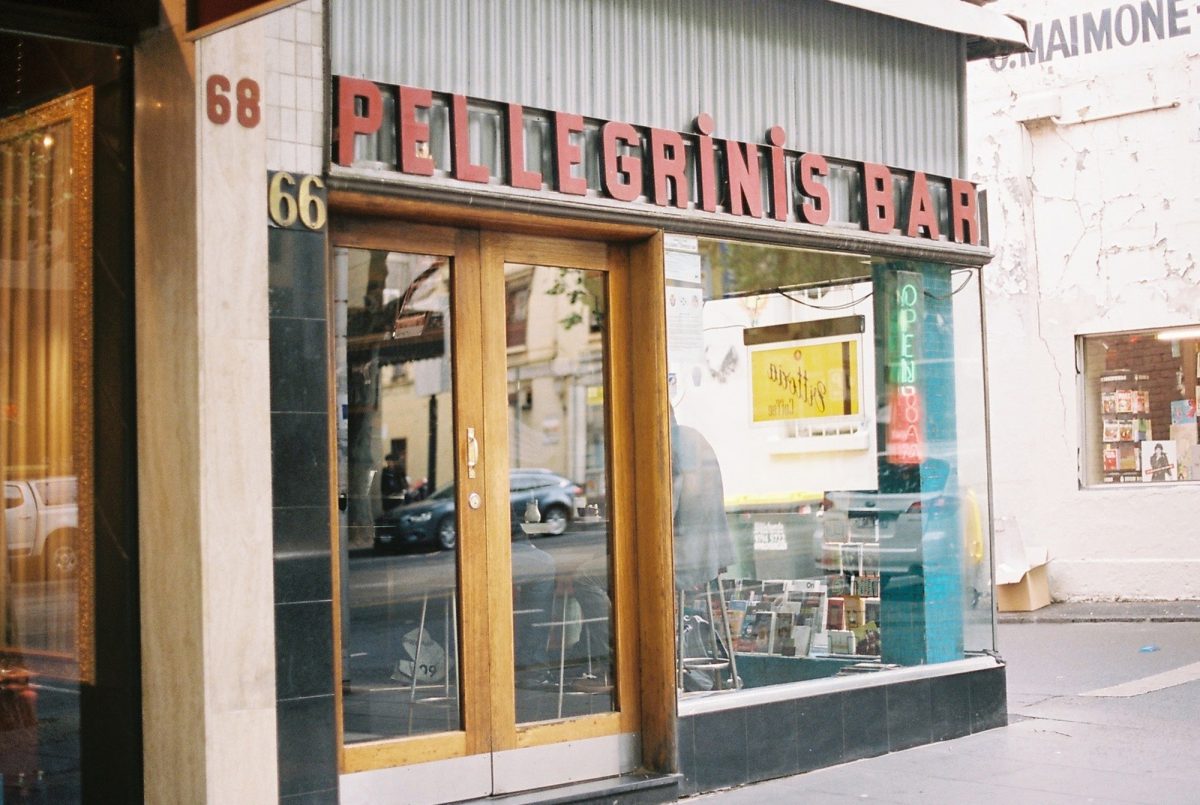 The scene of many a first date or wedding photo – Pellegrini’s (est. 1954) is one of the oldest coffee shops still serving today in Melbourne. Photo by Nusha Gurusinghe. 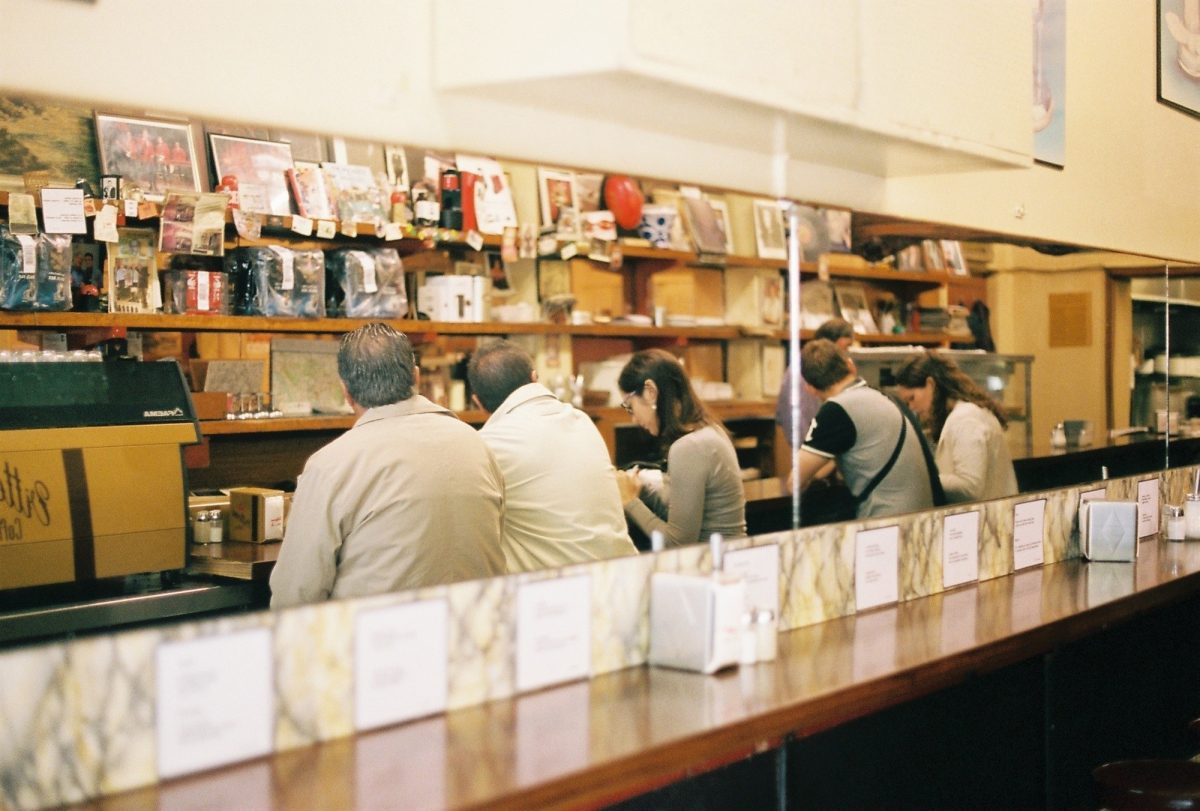 According to Pellegrini’s folklore, the first espresso machine in Melbourne arrived here in 1954. Photo by Nusha Gurusinghe.

For many urban dwellers, the coffee shop experience is embedded in ritual. During the week, office workers gather with colleagues and catch-up while ordering their take away lattes. Freelancers, entrepreneurs and uni students set-up shop for hours with their laptops over an espresso or three. Tourists find familiarity, free WiFi and the promise of a ‘third place’, home-away-from-home, in global coffee chains scattered throughout cities. 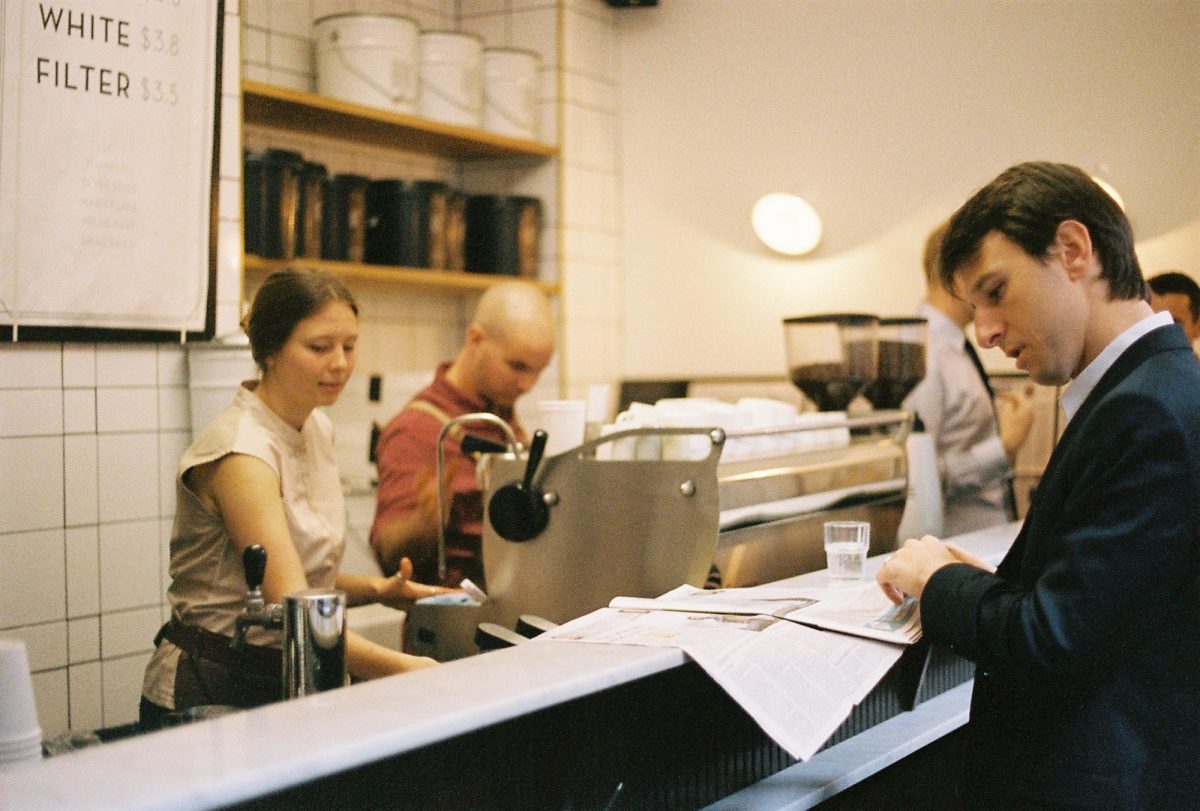 Catching up on news is very much encouraged as part of the daily grind at Patricia. Photo by Nusha Gurusinghe.

Bowen Holden is the proprietor of one of Melbourne’s most popular cafés, Patricia, which is located in the heart of the city’s legal district. On any given working day you will find the compact, standing-room only café crowded with a variety of customers eager to make Patricia part of their day. “Where we are located, we get a lot of barristers, lawyers and judges coming in for coffee. We have bankers as well and people journeying to the city especially for coffee. So it’s a really interesting mix. Our café has got a feeling of activity about it. There are lots of catch-ups and you do hear a lot of business go down. There is a general feeling that things are happening around here,” said Bowen. 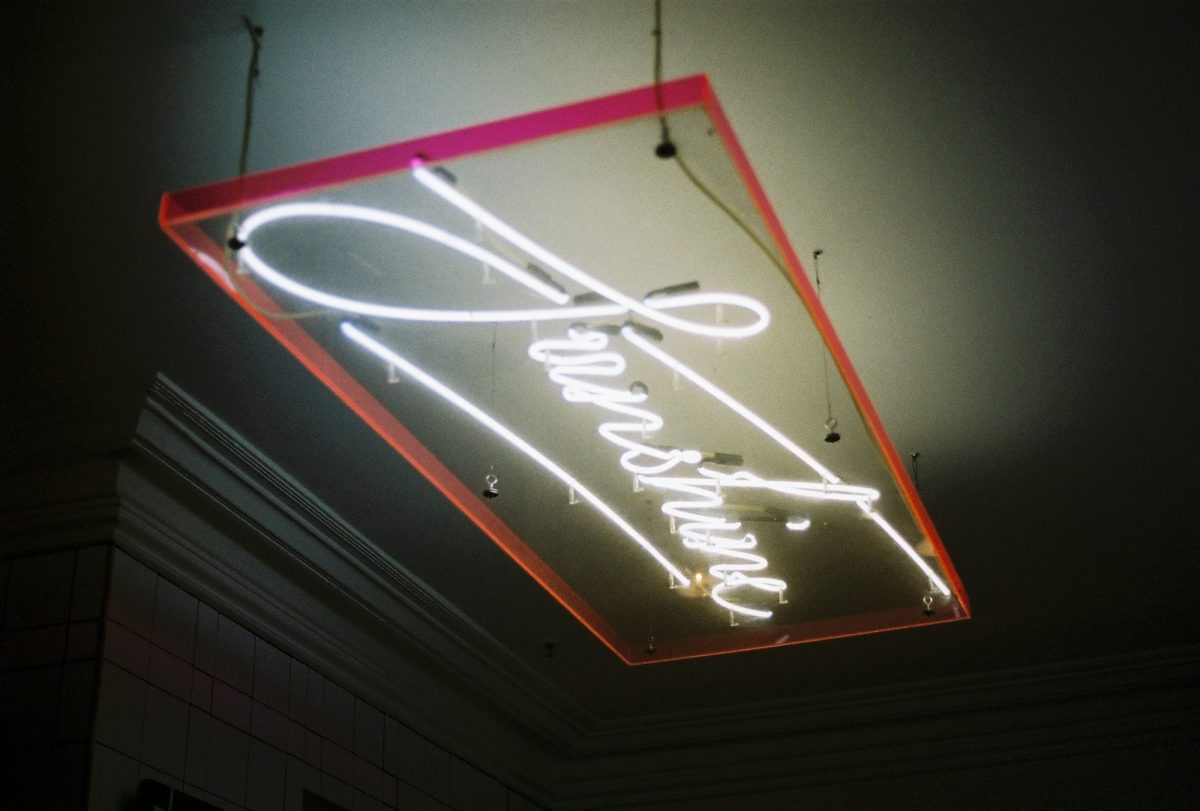 The ‘Sunshine’ neon by Delta Neon shines day or night at Patricia. Photo by Nusha Gurusinghe.

A striking element of Patricia is the aesthetic of its physical space, designed by Melbourne/Sydney-based practice Foolscap. Three large boards fill up an entire wall of the café where newspapers are pinned daily and a small library of niche magazines are displayed along the sunlit windowsill. According to Bowen, balance and inclusion are important parts of the café’s philosophy; the magazines and newspapers help to make customers feel welcome. “We are refined as far as what we offer, by only serving coffee, but we don’t want to exclude anyone by doing this. All of our magazines are hand-selected by someone who runs her own magazine and they are all very design driven and fashion orientated. We want Patricia to be about everyone. Even if they aren’t into coffee, I hope it is a space where people just want to come,” said Bowen. 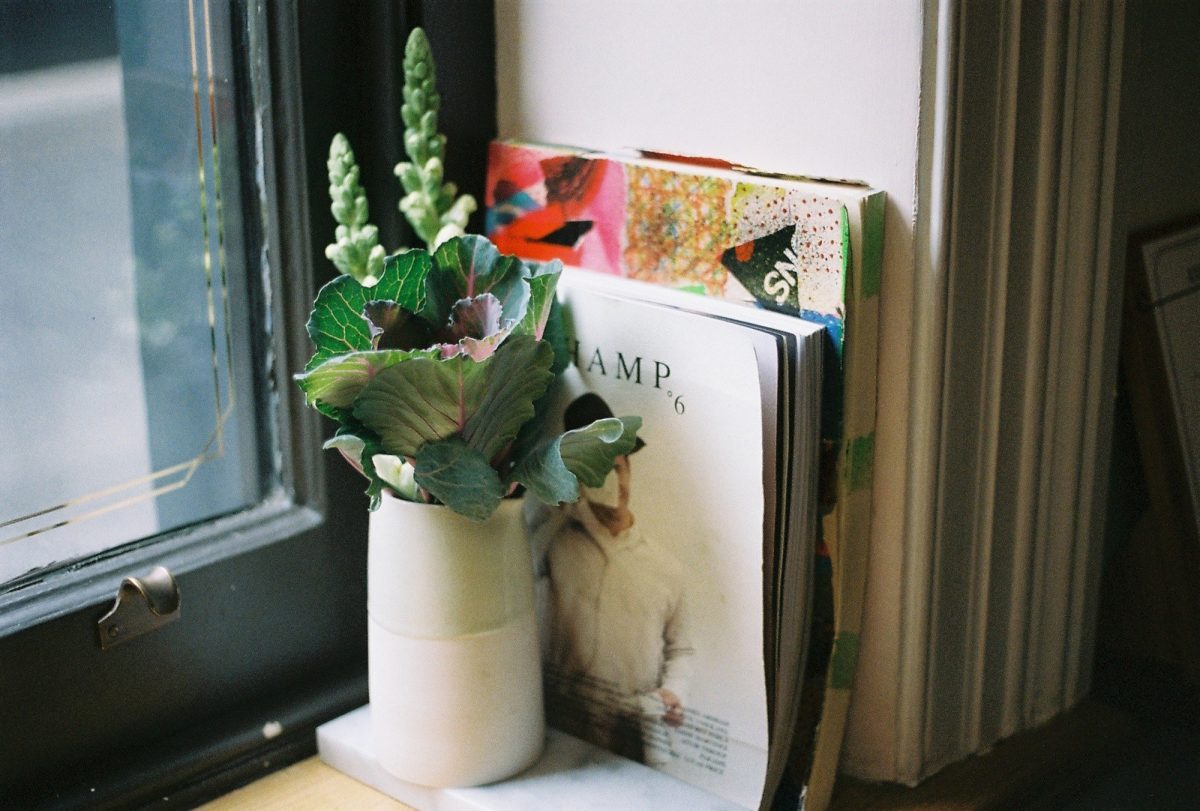 The reading matter at Patricia encourages patrons to linger over inspiring art, design, fashion and cultural pages, as selected by Ala Champfest editor and AP kindred spirit Joanna Kawecki. Photo by Nusha Gurusinghe. 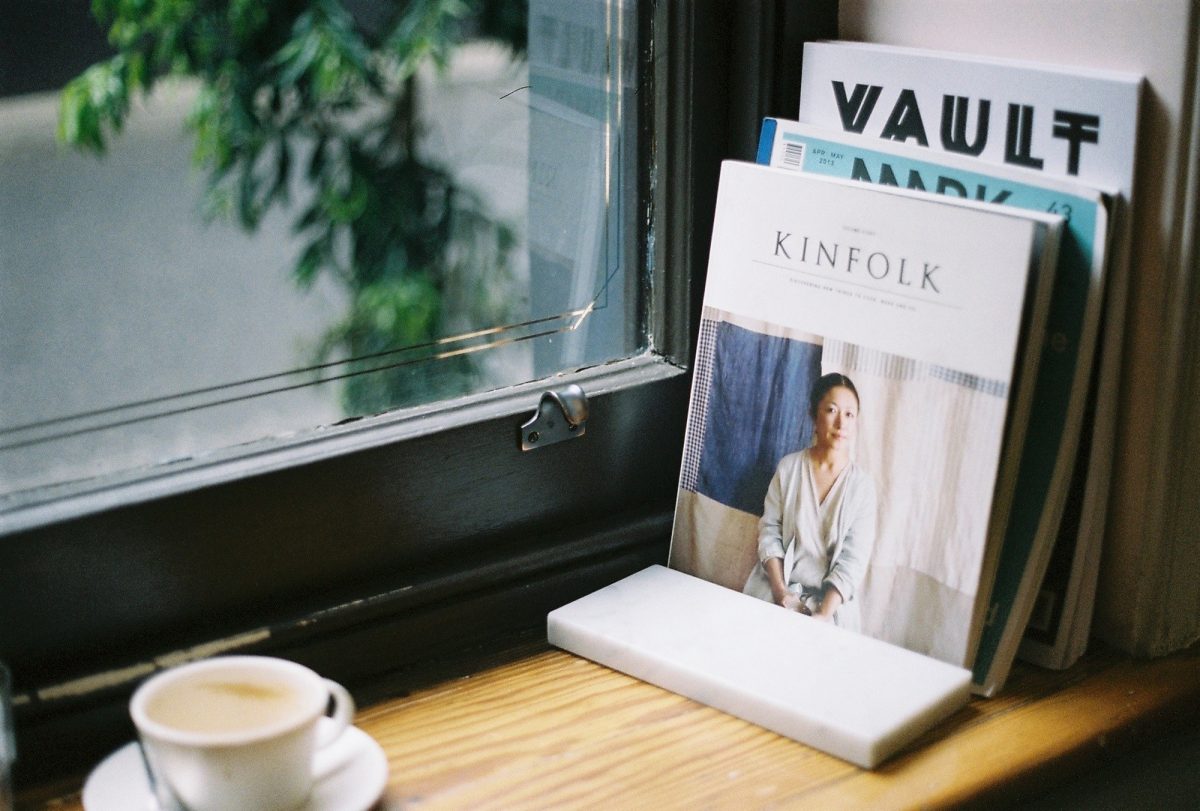 More sensory stimulation on the shelf at Patricia. Photo by Nusha Gurusinghe.

Patricia is not alone in its measured decision to specialise in coffee (you won’t find tea or hot chocolate on their menu). Coffee has always played a central and critical role for cafés as their driving force. The beverage that first became popular in Islamic communities as an alternative to alcohol has become the catalyst for gatherings around the globe. Since coffee entered Europe via the Ottoman Empire in the early 17th century, and the first coffee house opened in Venice in 1683, the humble brown bean has brought people together, enlivening Western culture. While the world has evolved, the pace of life has quickened and technology has embedded itself in everyday life, people still flock to cafés to meet and discuss knowledge and ideas – to ponder what is possible. 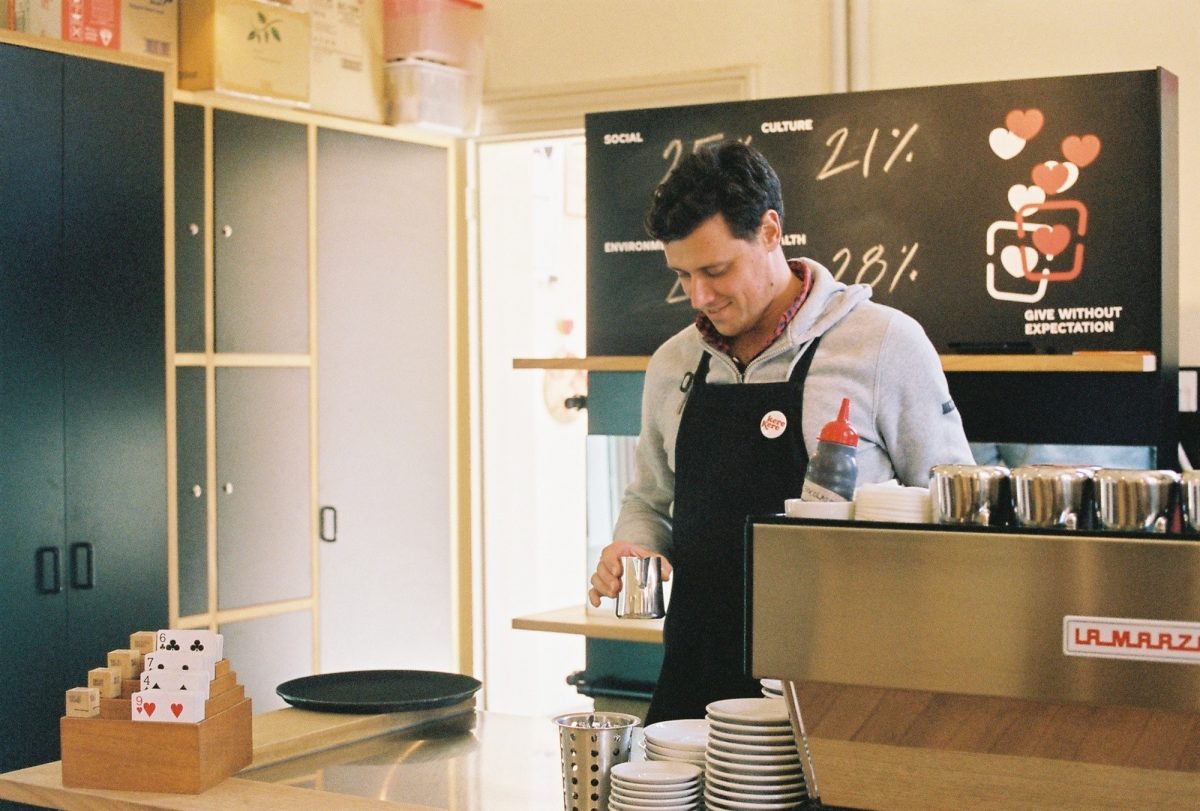 KereKere, a leader in the current movement of social entrepreneurial cafés, opened its first coffee cart at The University of Melbourne in 2007. The concept of KereKere (which means giving without expectation in Fijian) revolves around linking the traditional café experience with social justice and sustainability issues. The staff at KereKere comprise young people who have experienced difficulty finding employment due to various life challenges. Customers are encouraged to play an active role in sustainability and social issues: with a coffee purchase, customers receive a playing card with which they can choose to donate proceeds to a cause across the arts, environment or health. As a leading Australian university, home to globally-renowned thinkers, The University of Melbourne was the ideal location for KereKere proprietor James Murphy to open his progressive café. 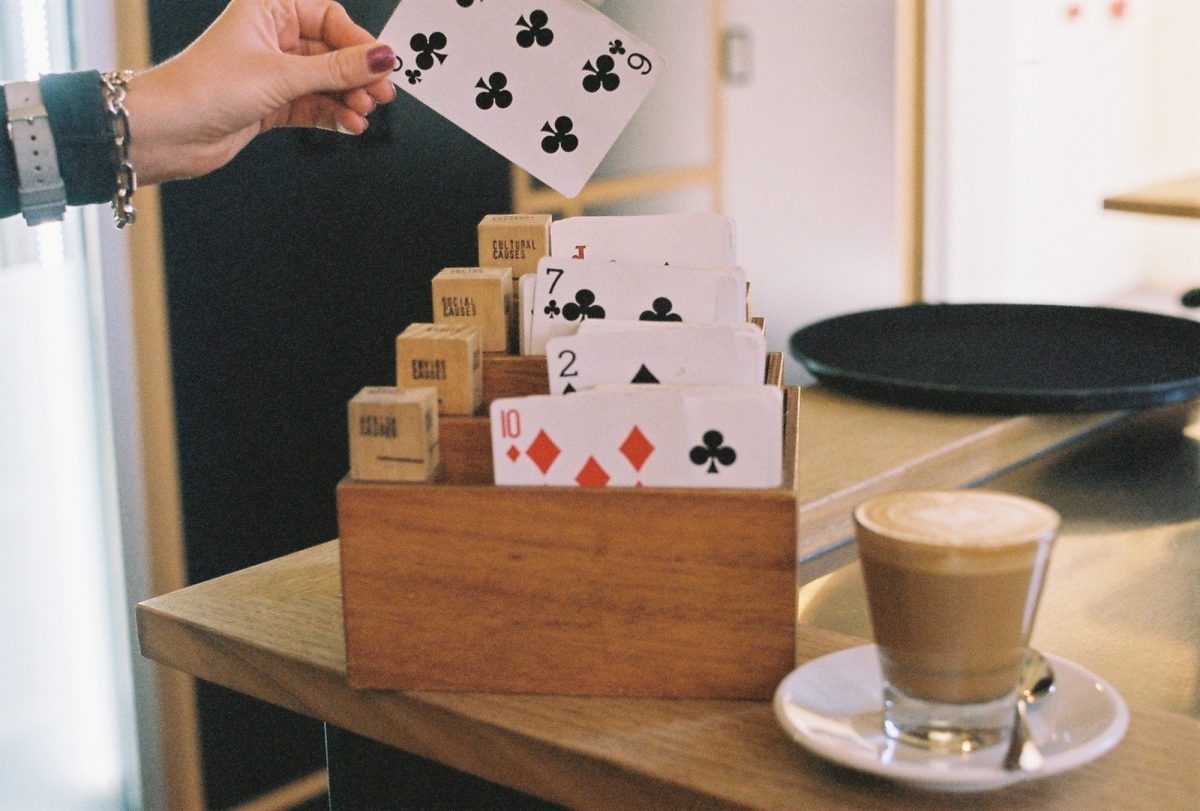 “I remember that I thought this is only going to work at Melbourne University – for what I want to do. We were a café, but first and foremost a vision. We have since learnt to engage a broader audience,” said James. Like the coffee house proprietors in Oxford, James’ hunch proved right, and the support of the university community enabled KereKere to develop from a coffee cart to a spacious coffee house in the Boyd Community Hub in Southbank. Like the philosophers and political thinkers of yesteryear, KereKere is utilising a shared space to create bigger social movements. “The core of what we do is that we like to be part of something bigger than us. At the Boyd, we really feel part of the community. We like to be part of a broader community – we play that role”, said James. 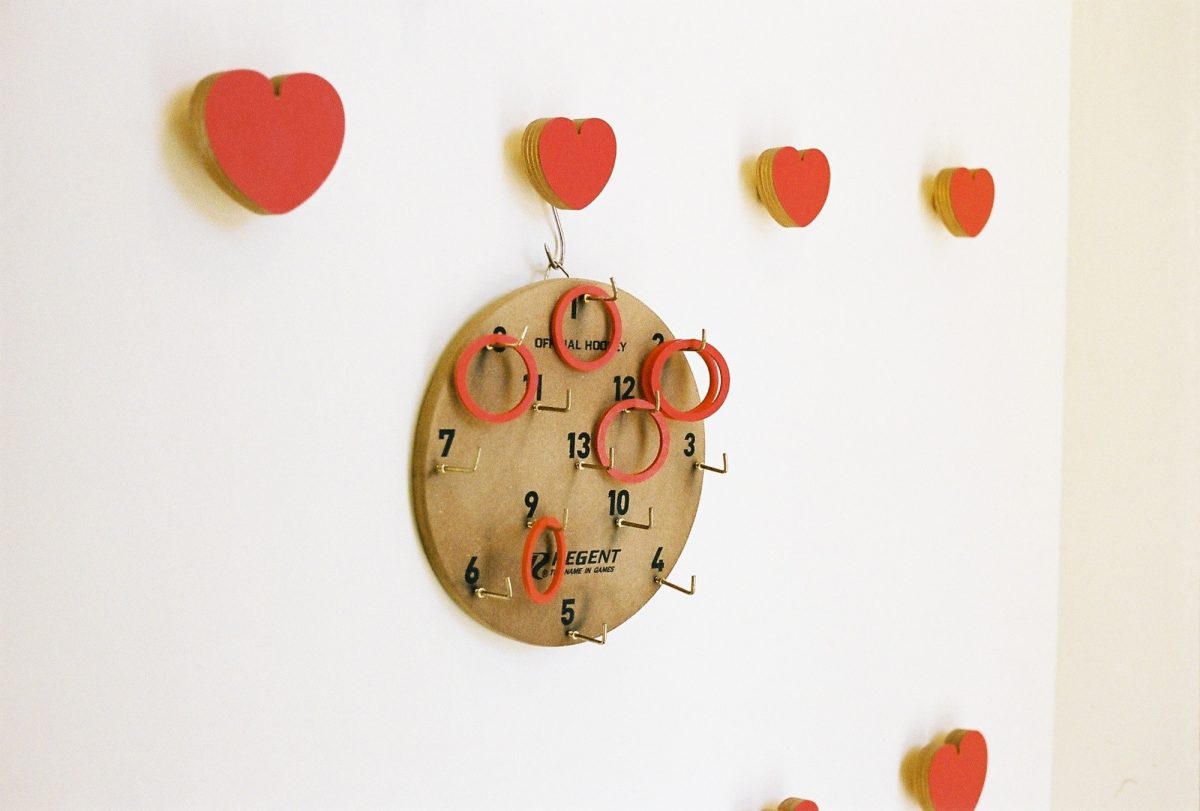 The progressive initiatives taking place in Melbourne cafes are as much embedded in the notion of social exchange and history as they are caffeine. A number of contemporary cafés in Melbourne pay homage to the symbolic history of caffeine. Take Seven Seeds coffee roasters in Melbourne for example. One of their most popular cafés, Brother Baba Budan, is named after an Islamic scholar who smuggled seven seeds of coffee out of Yemen during the 16th century, eventually planting them in southern India. This triggered the global expansion of the coffee industry; wresting the Ottoman Turks’ stronghold on coffee trade. Or consider the St Ali Sensory Labs. Through a distinctly scientific approach, St Ali pays homage to caffeine’s original use as a medicinal and religious aid by Islamic communities.

Historical references aside, Bowen from Patricia perfectly sums up why the café experience embodies community and cultural enrichment. “I personally get a lot out of something that is made really well and with care. That in itself gives me a pleasure reaction. It’s the ritual – the routine, of coffee. Coffee helps to develop a sense of who you are”.

Anna Hickey is a freelance writer based in Melbourne who has recently graduated from a Masters of Communication. She has a love of food and is passionate about the important role it plays in enriching culture. Anna likes to create, especially in the kitchen where she makes and blogs about healthy recipes.

View all stories by Anna Hickey

Nusha is a Melbourne-born photographer who can't shake her love of 35mm film. Her favourite camera is an Olympus OM10 gifted to her by a former colleague. Nusha's photos have appeared in Paper Sea Quarterly and Korean-based B magazine. She has an insatiable addiction to pain au chocolat and travel.

Welcome to issue three of Assemble Papers in print. Themed ‘communal culture’, we take an expansive look at collective and collaborative living – from the wintery depths of Scott Base, Antarctica, to the flood-prone community of sub-tropical Awaran, Pakistan; from DIY backyard bungalows to neighbourhood-defining architecture in Copenhagen.

Bakehouse Studios: Culture Is What We Do When We’re Really Living

For nearly twenty years, Helen Marcou and Quincy McLean had been supporting Melbourne's musicians and artists through Bakehouse Studios. Then in 2010 their beloved live music community came under threat, and their position at Bakehouse unexpectedly primed them for political activism - work that continues today.

Born in the 1960s, discothéques were early incubators of experimentation in design, new media and ways of living. From fashion trends to regulations around noise, alcohol and propriety, what resonates above all is how nightlife shapes wider urban life. Alexis Kalagas charts a wonderful and colourful history of nightclubbing.