Continuing our biography of vertical life in Melbourne, we explore the past and present of the Beverley Hills in South Yarra. Completed in the 1930s, Beverley Hills brought a touch of Los Angeles glamour (and thrifty brick-recycling) to sombre, Depression-era Melbourne. Elizabeth Kulas speaks with current residents about the practicalities of living at density, in cinematic style.

Located on Darling Street, South Yarra, the Beverley Hills apartment complex is the perfect embodiment of its highly eccentric creator, and remains irrevocably rooted in the time of its making. Howard Ratcliff Lawson is the late architect behind the Spanish Mission-style architecture exhibited across the complex’s two residential buildings, each five stories high. Completed in the mid 1930s, Beverley Hills was the crown jewel amongst Lawson’s various residential projects in the South Yarra area. So fond was Lawson of his development that his first granddaughter, born a year after the building’s official opening, was named in its honour. Canny, unconventional and ahead of his time, Lawson repurposed bricks from recently demolished Toorak mansions and employed talented craftsmen who were rendered out-of-work by the pervasive effects of the Depression. 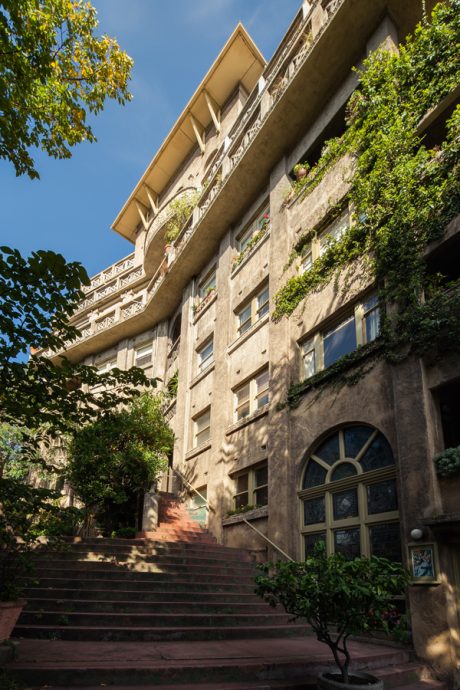 A touch of Sunset Boulevard? The staircase outside block one at the Beverley Hills. Photo by Matt Harding.

Lawson himself was equal parts daring businessman and passionate architect, and was in fact excluded from formal registration with Victoria’s architectural body due to his frequently exhibited entrepreneurial impulse. Seemingly unfazed, he pushed on with his projects, self-identifying as “the architect who builds”. And build he did. Beverley Hills was the largest apartment complex of its type in Melbourne of the 1930s. Complete with a communal rooftop garden and shared swimming pool, adorned by leadlight inserts and a footbridge, Lawson took obvious though idiosyncratic cues from the casual glamour of interwar Los Angeles, which was increasingly entering the Antipodean imagination via films, magazines and the mainstream press. 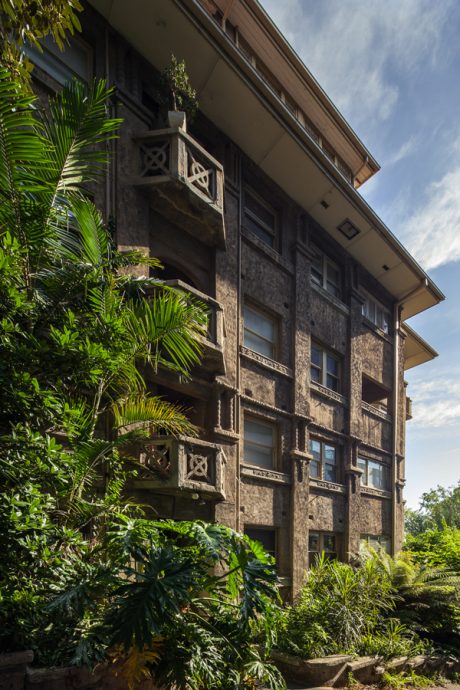 A groomed jungle outside block two at the Beverley Hills. Photo by Matt Harding.

Though Lawson met a premature death in 1946, the cosmopolitan nature of the complex endured. Encouraged by deliberately low rents and the flexibility offered by short term lease agreements, Beverley Hills continued to attract an eclectic mix of kooky and creative tenants. Drawn from the fields of media, politics, publishing and the arts, a diverse cast of Melburnians and visitors have, for a time, called the place home. At the centre of this community is the current managing director of the complex, a cultured gentleman by the name of Don. 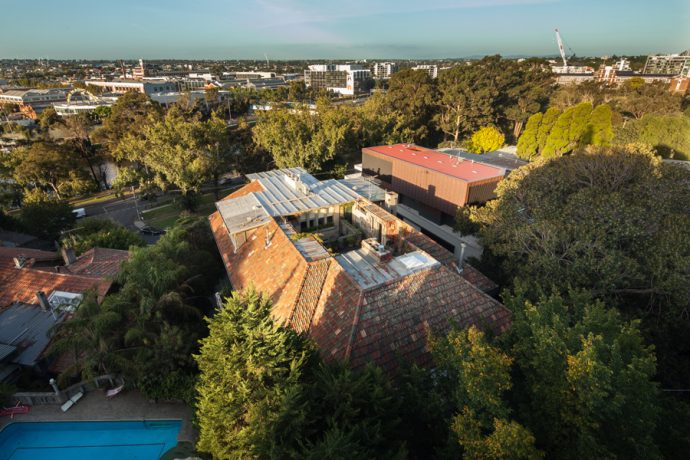 View of the penthouse apartment at Beverley Hills block one (as seen from the communal rooftop of block two), complete with rooftop garden. Photo by Matt Harding.

Having attended the nearby Melbourne High School, Don remembers walking down to Beverley Hills to purchase an ice cream from the then operational communal shop located on site. He recalls tales of tenants past, including 1950s models who posed for Helmut Newton during his early career in Australia and the parade of Melbourne characters who’ve passed through over the years. Don is a master storyteller who, after a successful career with the BBC in London, returned to Beverley Hills and took stewardship of the place in the late 1970s. His is a deeply personal connection with both the physical space and community of people that make up the complex. It’s immediately clear that, like a hobby scientist, he enjoys dabbling in human chemistry, calibrating the mix of inhabitants to achieve just the right result – a diverse and tolerant mix of residents. 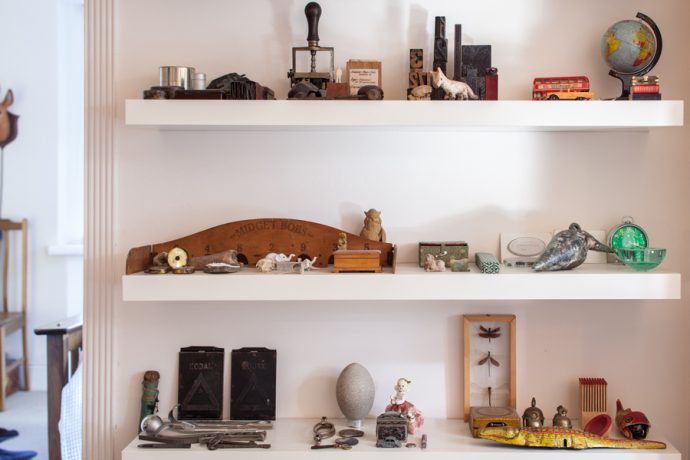 Shelves in Kim and John’s living area showcase curios and mementos collected on travels through Europe and Asia. Photo by Matt Harding.

In the course of our correspondence, Don introduces me to Kim and John, a couple with wide and varied interests who are new arrivals at Beverley Hills. After six years living in Barcelona, making and selling handmade candy, Kim and John returned to Melbourne hoping to find a rental property that offered some measure of security without the onerous commitment of a mortgage. “One of the big things we learnt in Europe was that you don’t need to buy”, explains Kim. “It was an Australian dream, but now it’s become an Australian right. And many people are never going to buy in Spain because they live where they want to live already. In Spain you can get a ten year lease”. 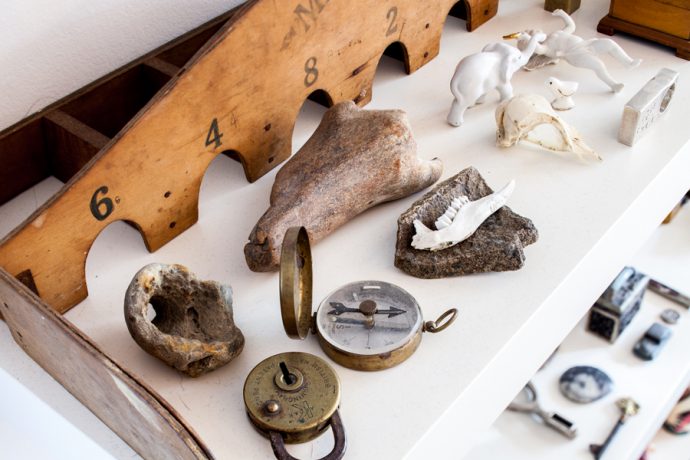 Although the apartment required a fresh coat of paint and some repair work when the couple moved in late last year, the place feels so in tune with the needs of its inhabitants that it’s hard to believe they’ve only lived there for a matter of months. The kitchen is small by contemporary standards, which posed a problem given Kim’s love of cooking and her fondness for regularly hosting friends. Responding to their space, a small walkway-like room off the kitchen was fashioned into a sort of ante-kitchen, with storage for cookware and space to prepare food and congregate. “It’s about making do with what’s there, not necessarily using it for what it’s supposed to be”, offers John, noting that their inventive use of space had raised a few eyebrows amongst visiting family members. Their adaptation of the existing layout speaks volumes about their priorities: socialising with friends, a place to meet and share food and company, and makes good use of the light and living area the apartment provides. 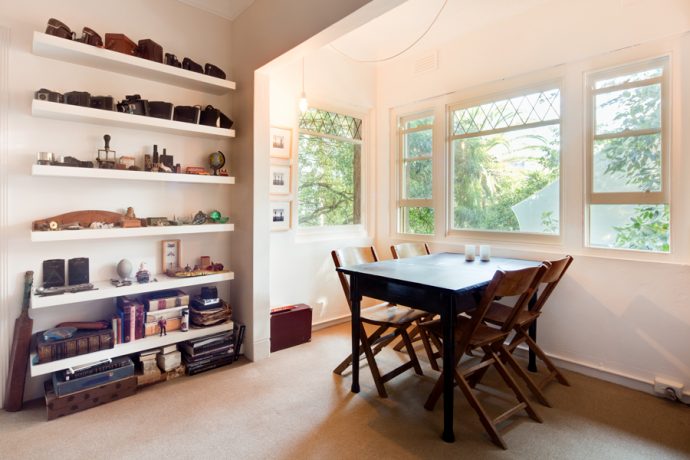 Afternoon light in the dining and living area in Kim and John’s second floor apartment. Photo by Matt Harding.

Kim and John were happy to put in the effort to spruce up the place, confident that their relationship with Don and his commitment to retaining tenants long-term will mean they’re able to stay in the apartment without any exorbitant rent increases. What remains most impressive about Beverley Hills is this willingness from both sides to invest in the living spaces themselves and the more abstract concept of a micro-community, regardless of whether one owns or rents. 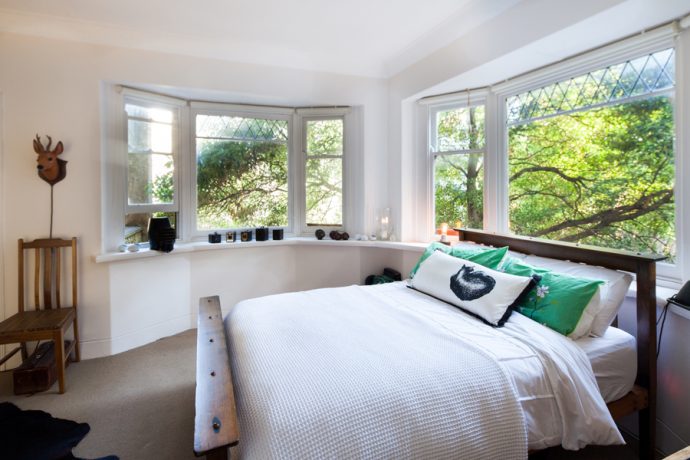 Kim and John’s tidy bedroom in the treetops, surrounded by bay windows. Photo by Matt Harding.

The lack of this sense of community was something the couple sorely missed upon their return to Melbourne as they readjusted to a sprawling city of lower density living. Kim reminisces with obvious relish about the closeness of amenities in cities like Barcelona, where groceries and other daily needs could be purchased from a local store just a few minutes walk away. Likewise, she enjoyed that due to smaller living spaces, people we’re forced to spend time outside of their homes. “The public spaces really became an extension of the home”, Kim says, describing how retired couples would take to the footpath on warm nights, using fold out chairs to eat dinner in the open streetscape. 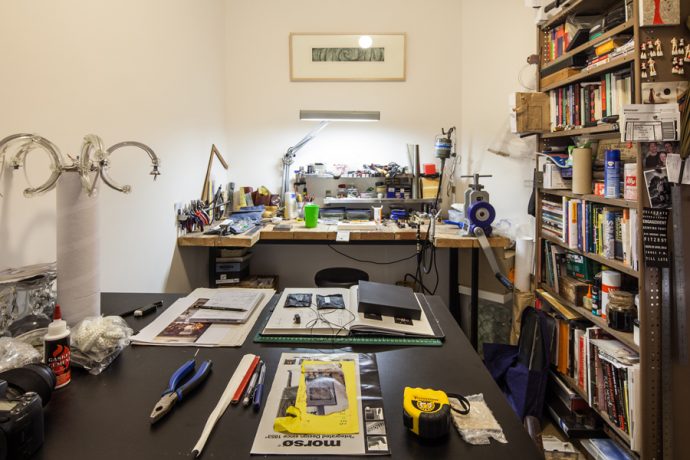 John now devotes his days to his artistic practice, working from a small studio space at the front of the apartment. He looks out onto the central staircase of the building from which tenants directly access their front doors at each level. “When I sit in the studio with the windows up, people come past, to and fro, and it leads to conversations”. Likewise, his own handy work has led to helping some of the other residents with domestic fix-it tasks and Kim kindly offers preserves and jams to her neighbours when in surplus. Another resident who often has an excess of bread shares this too and Don’s partner, Christine, cares for the property’s garden, maintaining a supply of herbs that are placed throughout the property and made available to any who may desire them. 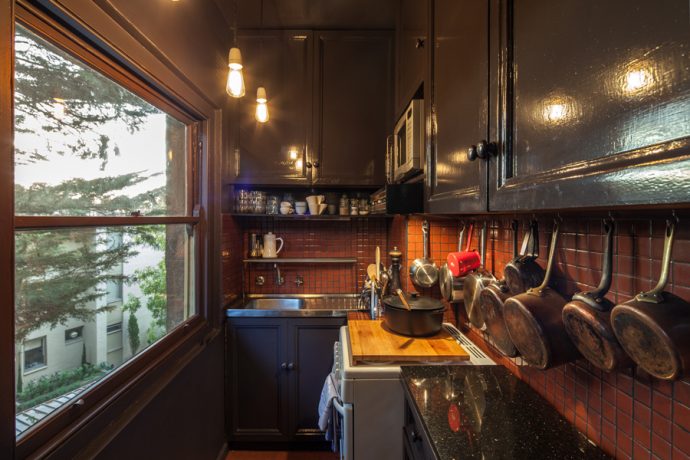 The once extensive grounds of the building originally ran a few blocks east up Darling Street. Even though Beverley Hills has been scaled back over the years by ever-encroaching developments, the surroundings are still home to many beautiful palms and an established Moreton Bay Fig valued at two million dollars by the Stonnington Council. The property sits almost precariously on a rise and although Kim and John find the steep incline and stairs a hassle when grocery shopping, they feel Lawson’s design remains as convenient and thoughtful as when it was first conceived. John sums up his sentiments aptly when he muses, “I guess this building is physically demanding to approach. But I love that thing about buildings, when they demand a little something of you. If a building needs a little something from you, I think that’s ok”. 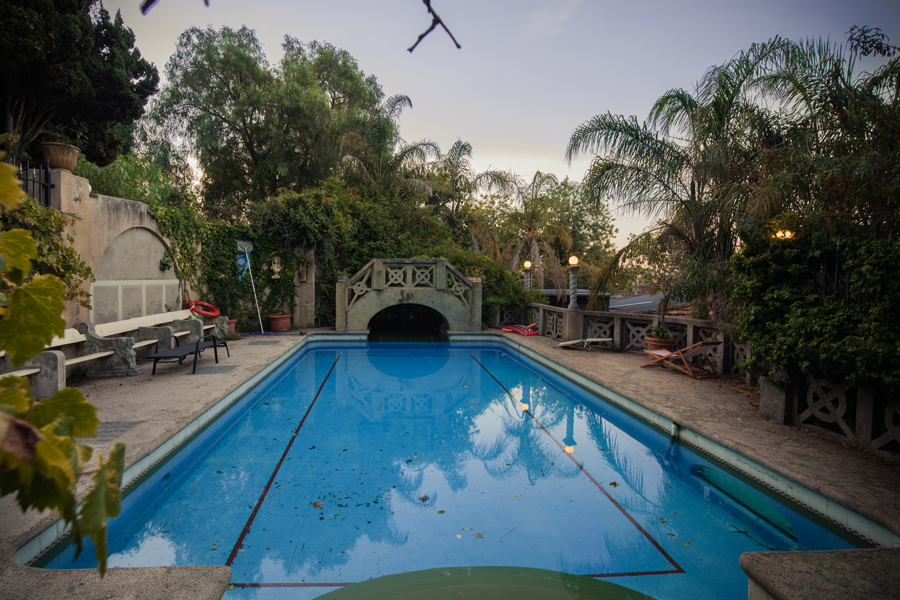 At dusk, the communal swimming pool at the Beverley Hills, complete with ornamental bridge. Photo by Matt Harding.

Thanks to Don, Kim and John for a rare glimpse inside the Beverley Hills. All photos by Matt Harding.

Elizabeth Kulas is currently completing a minor thesis in Art History at the University of Melbourne. Freelance writing allows her to share her incurable curiosity about people, visual culture and food. She loves cooking, eating and the sound of the German language.

View all stories by Elizabeth Kulas

You may remember the luscious, indoor jungle home of Andrew (Maxi) Walker and Gabriela Holland from our visit earlier this year, when we learnt the DIY recipe for 'kokedama' or string gardens. Pino Demaio makes a return visit to this compact, art deco apartment in East Melbourne to find out more about the plant-obsessed duo behind Pop Plant.

Introducing Less is More, a new section presenting outstanding examples of architecture and design for compact living, as curated by Assemble Papers. Here, Quino has chosen a recent project by young Spanish practice ARQUITECTURA-G. In this renovated apartment in the historic El Born district of Barcelona, a small footprint, low budget and creative use of space combine to winning effect.

Winter Park: a place where small scale suburban life co-exists harmoniously with the neighbouring flora and fauna. A pioneering feat of its time, Emma Whiffen explores this innovative 1970s design in Doncaster, which focuses on landscaping by integrating the surrounding parklands and bush into the housing complex as a shared space for its residents.