While living in the coastal town of Barwon Heads, Joseph found himself not only surfing (“spending a lot of time in shorts”), but also housekeeping. In addition to daily beachcombing for found objects, drawing and etching sessions, wood chopping and lawn mowing became part of his creative routine. This playful approach to domesticity speaks volumes about his considered art practice, which is about culture-making in the everyday. Through his interests in improvised music (artist and soundmaker Dylan Martorell is a much-respected mentor) and cross-cultural craftsmanship, Joseph’s work explores the fluid link between the human and the mechanical, the specific and the timeless, the handmade and the readymade. From Duchamp to beachcombing, Neolithic runes to the nomadic knowledge of the Berber people of the Sahara, it’s hard to pin-down Joseph’s practice to any one time or location. Rather, his meticulous ink and graphite drawings on paper, obsessive yet delicate etching onto rock and bone and temporary structures in woodlands and cityscapes conjure up both the primitive and the futuristic, artefacts from either the beginning or the end of humankind. 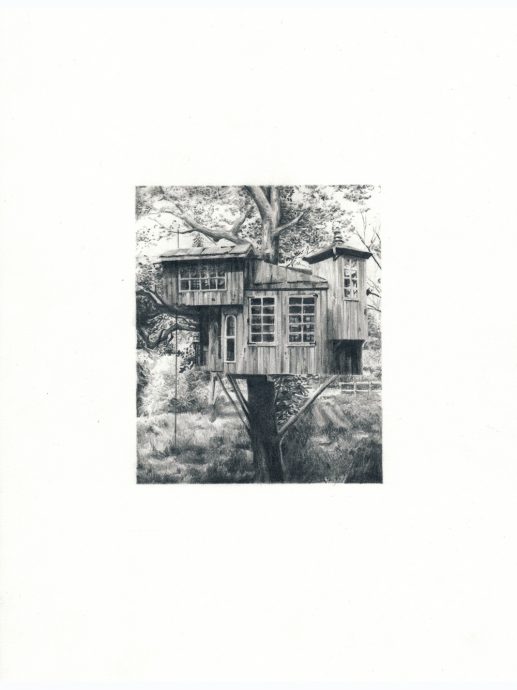 It was a rainy day when I first came across Joseph’s work in the form of Shelters, a series of rickety structures in Melbourne’s Docklands, during last year’s Next Wave festival. I had been looking forward to experiencing this work for some time, interested to see what impression, if any, it could make on the developer-driven skyline and austere streetscape of the Docklands. Joseph had spent a number of months building the work in a local workshop, collecting materials, talking to construction workers and passers by. “There’s something about using your hands, using available materials and being somewhat responsive and ingenious in the environment – a sort of romantic initiative”. 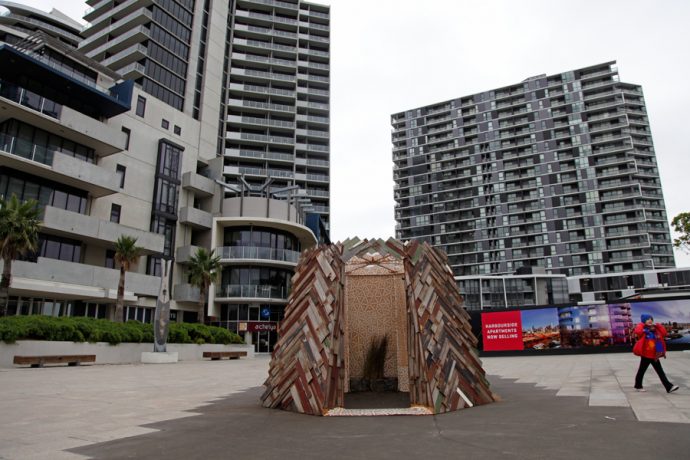 Walking through, pausing to contemplate my surroundings within and around Joseph’s improvised dwellings, rafts and lookouts, there was a sense of welcome and of refuge, sensations not generally associated with this 9 year-old manufactured suburb. Fashioned from salvaged timber, netting and rope gathered from local building and construction sites in the months prior to the installation, there was a ramshackle poetry to these humble structures. 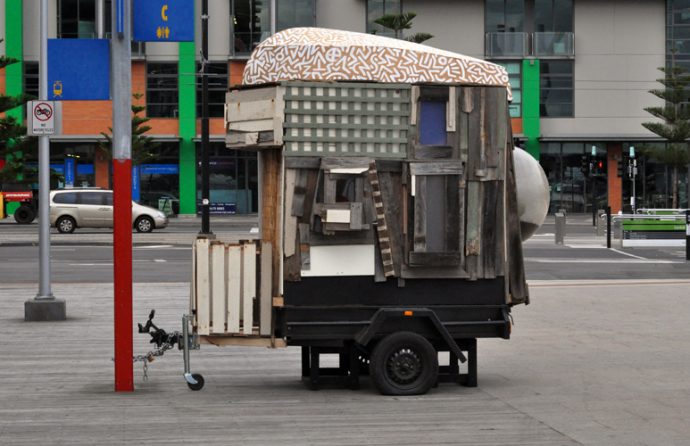 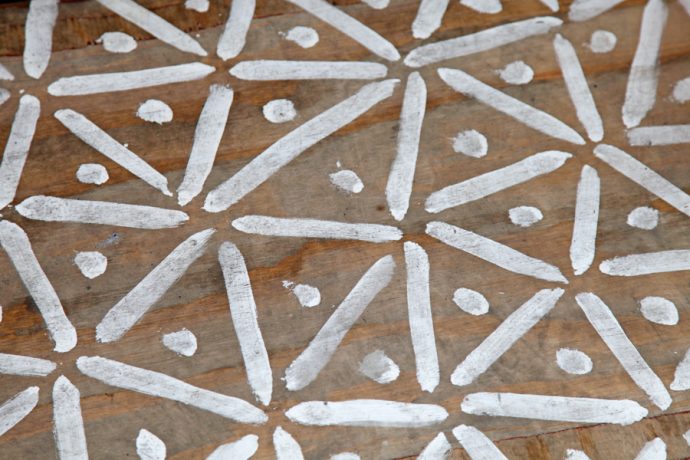 Interior markings within one of the “Shelters”. Photo by Eugenia Lim.

Weather-worn timbers and tribal markings gave the impression that these shelters had existed in situ for some time. Part sculptures, part dwellings, at first, Joseph had wanted to place Shelters in the hinterlands and margins of Docklands, to further blur the borders between found and constructed object, architecture and nature, design and decay. But in the end, their prominence within the “New Quay” promenade gave them an approachability and human scale offset by the international-style glass and steel of their backdrop. 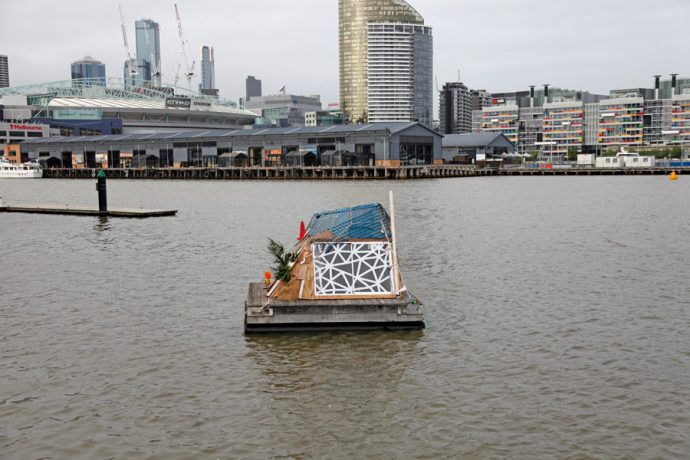 A small, ramshackle refuge in the harbour of New Quay, one of the works in “Shelters”. Photo by Eugenia Lim. 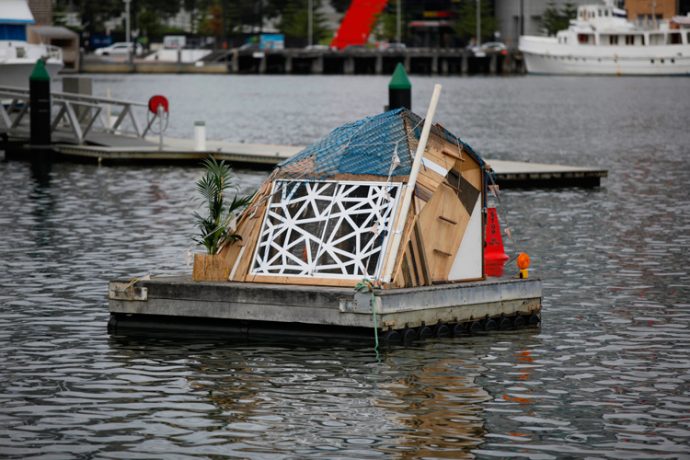 Over the past few years, Joseph and his urban planner girlfriend Jennifer have made research and residency trips to urban and remote cultures as diverse as Mauritius, Morocco, Paris and Sardinia. As Joseph says, “I’m always searching for the other. Like trying to read other languages. Not necessarily always in another culture, maybe it’s just in other people, in other behavior or trends, or even other suburbs”. 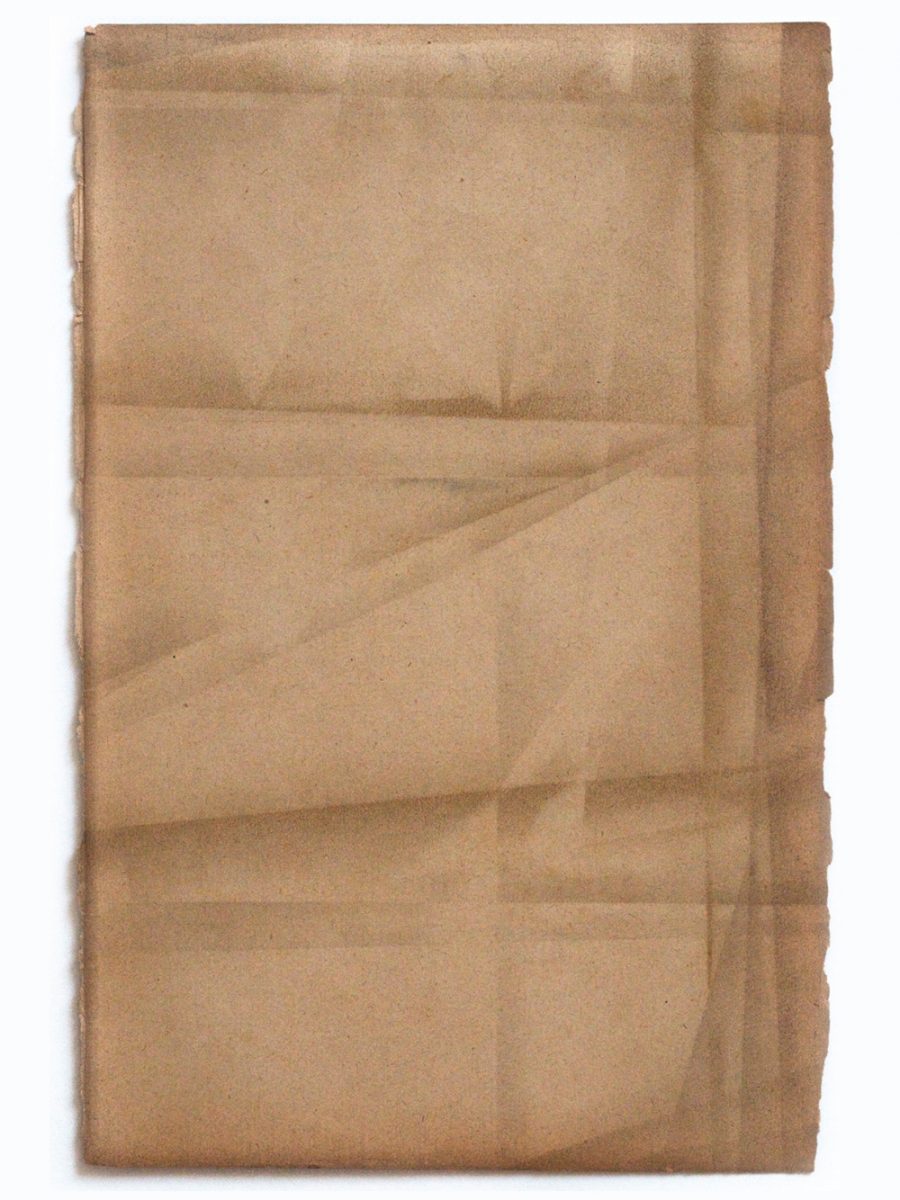 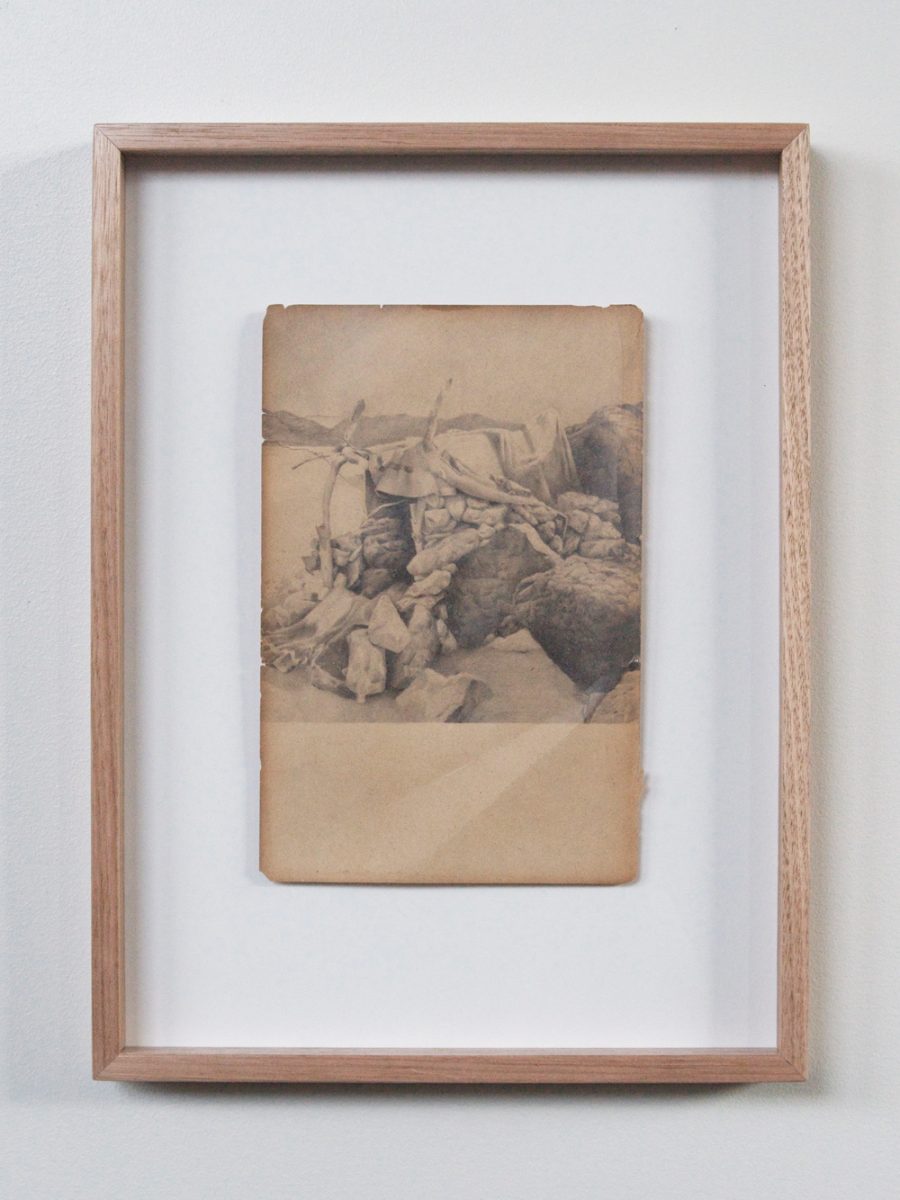 Continuing the nomadicism, the couple have temporarily relocated to Copenhagen, where Jennifer is conducting urban design research. And in what would seem like a perfect extension of Joseph’s interest in vernacular architecture and creative approaches to living, he is working with n55, a Scandinavian artist collective working with “art as part of everyday life”. N55’s autonomous and democratic approach to architecture, urbanism, culture and art have seen them create projects such as Walking House (2009), a modular dwelling system that encourages people “to live a peaceful nomadic life, moving slowly through the landscape or cityscape with minimal impact on the environment” and Communal Bakery (2010), a system for the baking of bread which can be established in “any local community where persons want to share the activity of producing bread”. 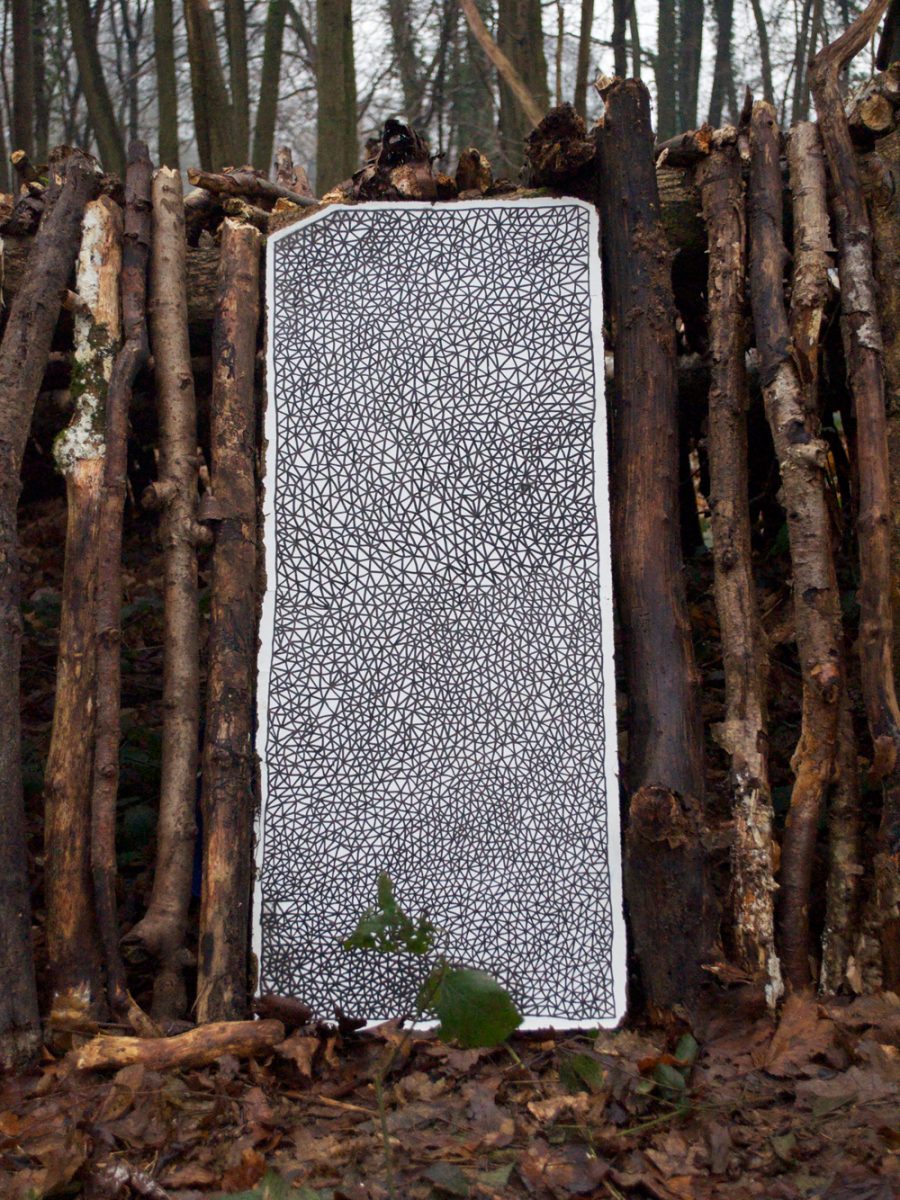 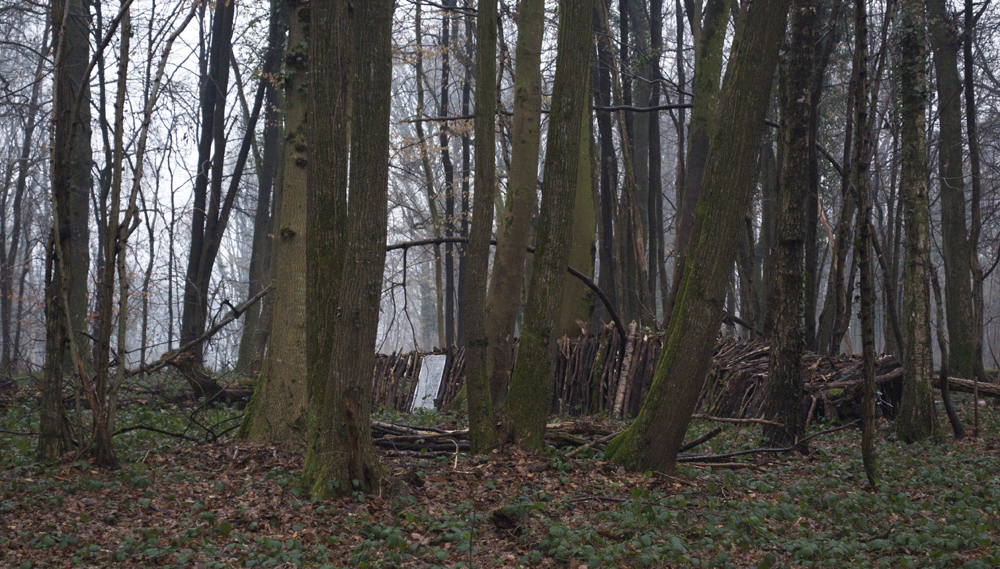 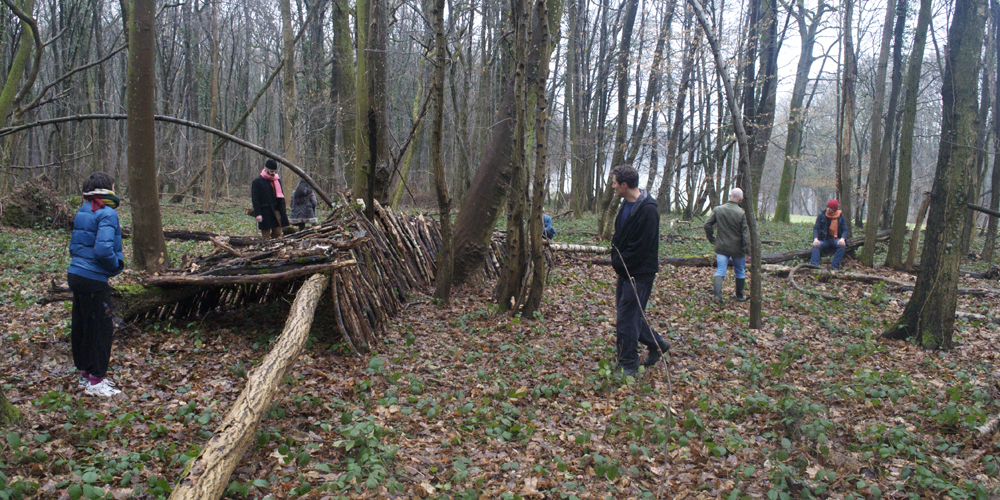 At the same time, Joseph has been drawing, collecting, engraving and assembling his ongoing series of “artefacts”, a selection of which he will exhibit at DDessin13, a new drawing art fair in Paris, in April. At the moment, he is enjoying the small and the tangible, the blurred distinction between the “existing patina” of an object and an altered form. “I think things are more interesting if they tend to suggest things beyond themselves, if they’re mysterious, not self-proclaiming”. 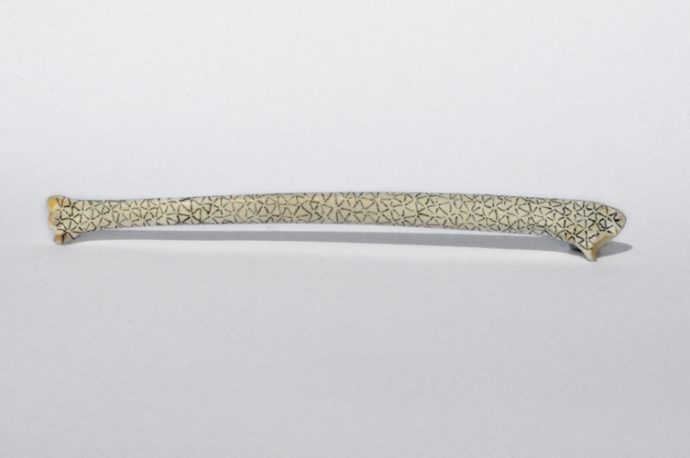 From the beginning or end of humankind. “Artefact”, 2011, Joseph L. Griffiths. Ink on found animal bone.

Biggest thanks to Joseph for his time and insight (over several coffees). For more information and to view more of Joseph’s work, visit the artists’s website: josephlgriffiths.com

Eugenia is an artist who uses video, installation and performance to activate people in private and public space. She was AP's founding editor-in-chief and has returned as editor-at-large. In art and life, she is interested in the intersection between the personal and the geopolitical. Agnès Varda is her hero.

Alain de Botton is a Zurich-born writer and philosopher now based in London. His ‘philosophy of everyday life’ covers the stuff of human existence: love, travel, work, status, architecture and most recently, religion for atheists. A writer and thinker of many commitments and convictions, Alain put a few thoughts to email while in transit to Oz on a book tour.

Understanding how people live is at the core of design director Rachaporn Choochuey’s practice. She’s the co-founder of Bangkok-based architecture studio all(zone), known for their playful projects which utilise reuse and recycling, while employing local materials and building techniques in innovative ways. Emma McRae sat down in conversation with Rachaporn, after her presentation at the […]

Influential architect Robin Boyd, known for his sensitive variation of modernism, is a household name that stretches far beyond the architectural elite. Boyd’s is a legacy that has endured in his expansive body of work, lovingly upheld in no small part by the 2005-established Robin Boyd Foundation. Rachel Elliot-Jones visits founder and director, Tony Lee, at the Foundation’s headquarters in Melbourne.