In addition to her own installation and performance works, in which she constructs temporary shelters and dwellings in public and gallery spaces, Hiromi has spent the good part of the last two years on the road, touring with husband and fellow artist Craig Walsh (as part of his Digital Odyssey project in a mobile studio-cum-home and recently, to South Korea for a collaborative work at the Gwangju Biennale). Home, shelter and society figure heavily in our conversation, which takes place on a Tuesday morning. Working throughout the night, quietly, meticulously, manically, Hiromi is kind enough to phone (“I have one of those unlimited plans, text me when you’re around”) during a characteristically sleep deprived spell of art-making, in the lead up to a commission for Brisbane’s Gallery of Modern Art (GOMA). 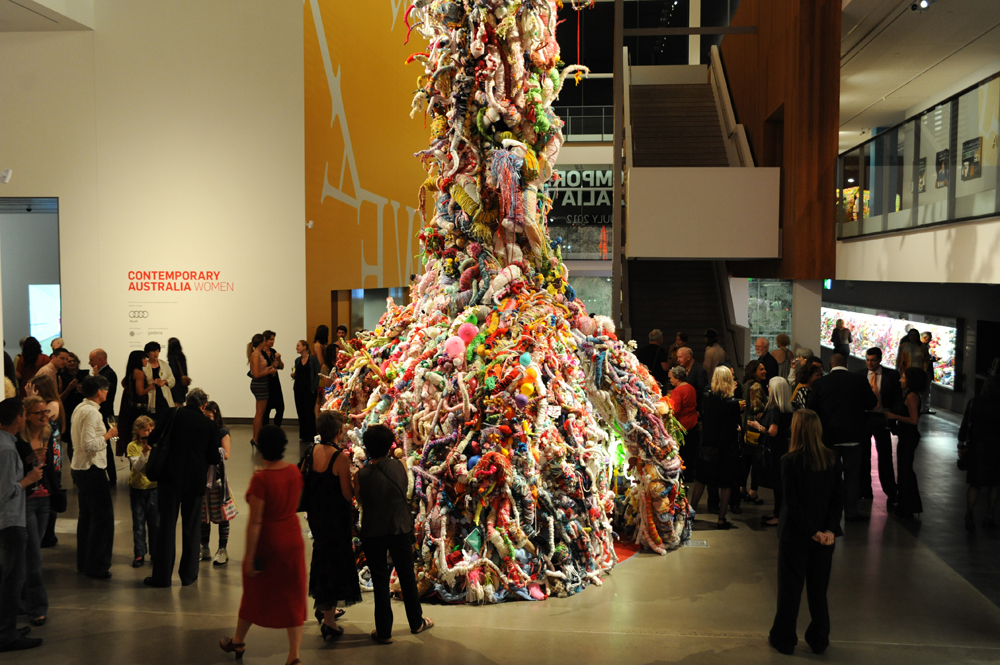 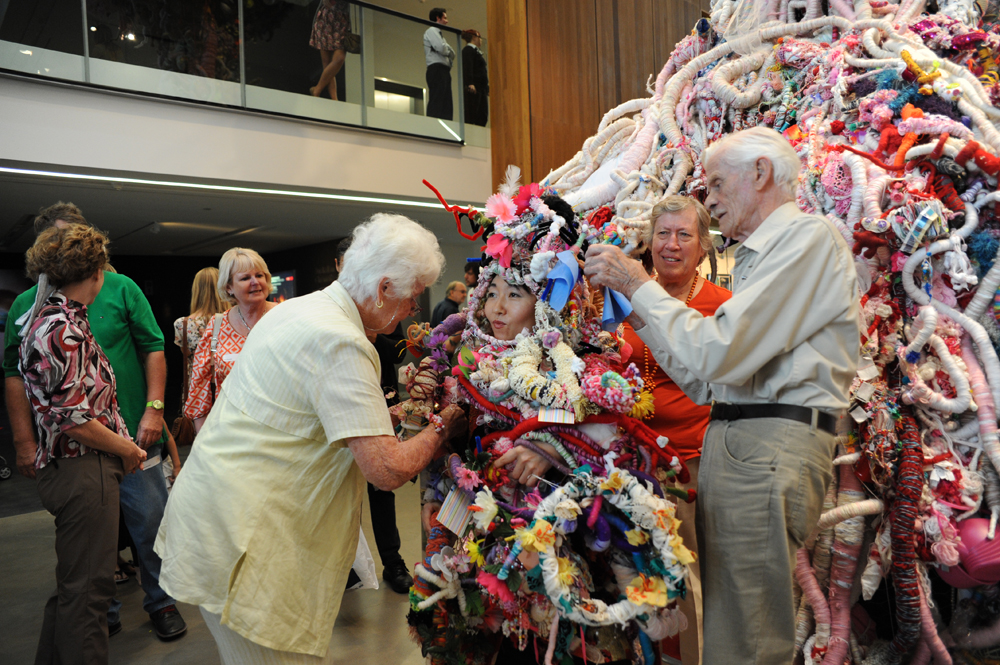 Hiromi in performance during a “ritual” celebration. Community participants attach their works onto the artist, getting interactive after a workshop for “Pistil” (2012), mixed media performative installation. Photograph by Yuji Yukishiro. 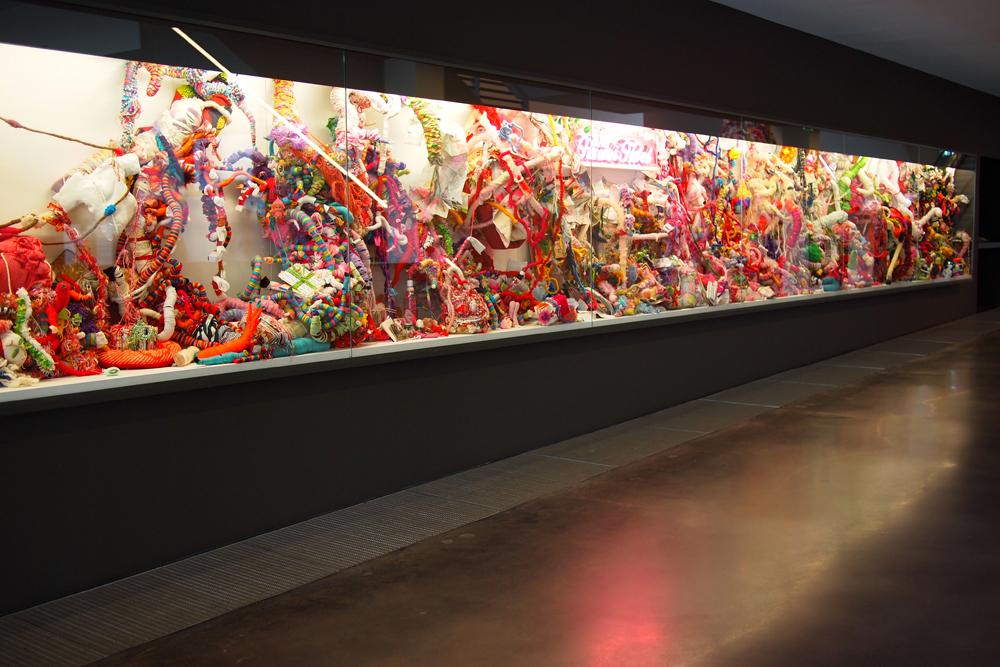 “Consciously generating emotion is a big part of my work. You need time to unwrap the cultural norm. Nobody has time now… to be in touch. We shouldn’t lose our sensitivity for emotions. We are dying to feel. Like going to the beach, being calm: the sand and ocean. Full moon, research shows, makes people wild. We are animals yet we are told to be like machines, efficient. Emotions don’t come into it. You have to secure time to be physically and emotionally present.” 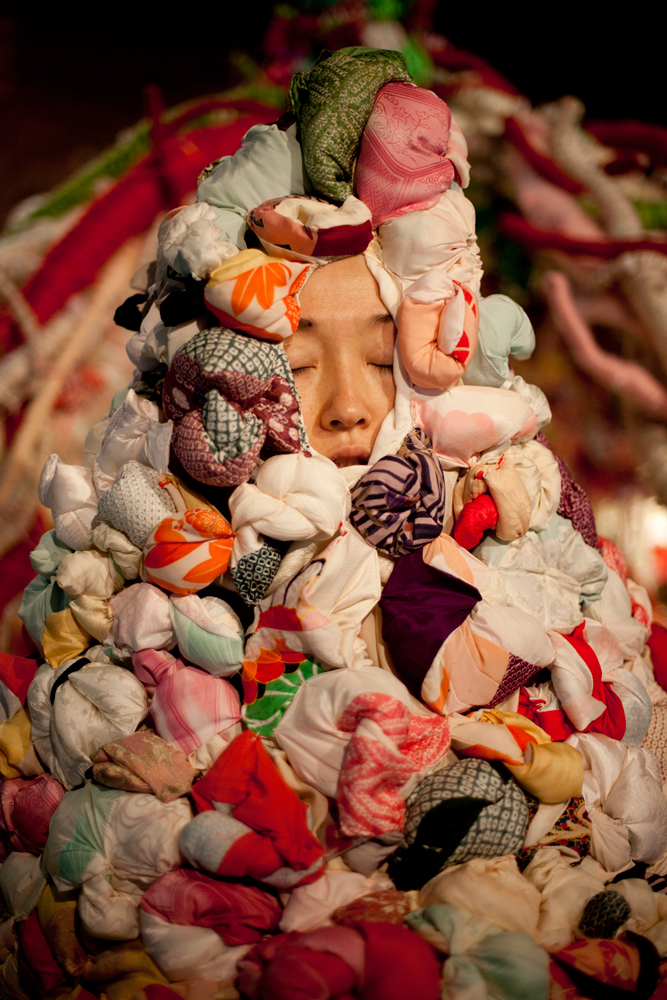 The diminutive Tango, 35, migrated to Brisbane fourteen years ago. Her rural Japanese upbringing in Imabari, was a case of “male domination, women silent.” Taking cultural studies in Tokyo only served to highlight her feelings of inside-outness. As classmates worked feverishly, onwards, ever upwards, towards lives as sararimen (salarymen) or academics, Tango chose instead to accompany Walsh across the Pacific for a new life in a vast country, in pursuit of an art that “fills the gap between a person and society”. Still, she doesn’t feel like she fits. But it is this autobiography of emotion, of being an outsider, that drives her to share and collaborate through art, using her inner-most thoughts as material. 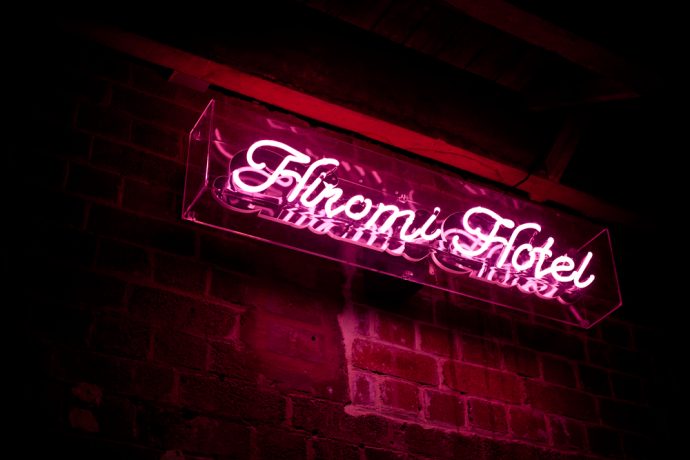 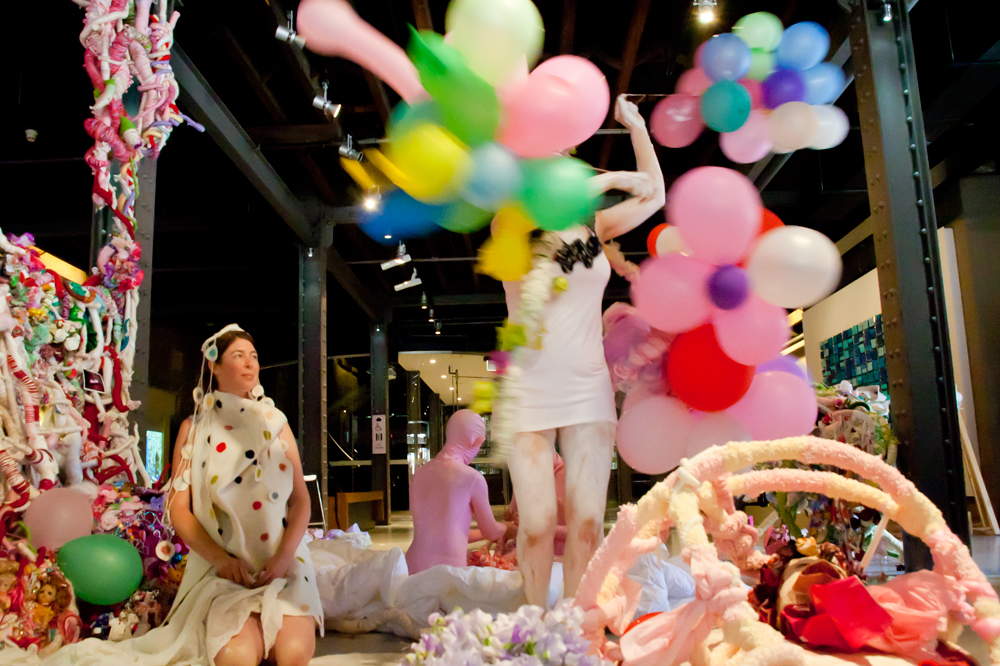 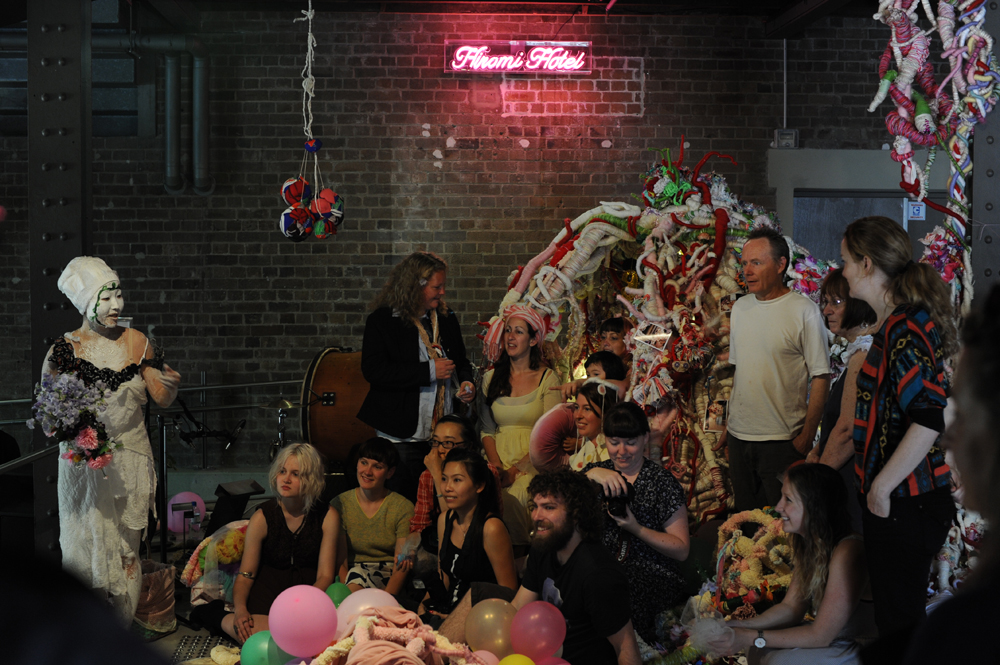 Tango’s Hiromi Hotel – Mixed Blood was on show at last year’s Primavera, an annual survey at Sydney’s Museum of Contemporary Art of significant work by emerging artists 35 years old and under. As in much of her work, Mixed Blood was an extremely public outpouring of private and often unruly emotions, fears and hopes. A host of public performances by the artist and collaborators in and around the Rocks, along with the visual chaos of the work (pink neon, a multitude of tightly-wound tentacles in shades of pink, red and off-white) belied a space of quiet reflection and intimacy. Responding to her own state of flux, Tango created Mixed Blood in the lead up to the birth of her second daughter, Mikiyo. Like her countrywoman, artist Yayoi Kusama, Hiromi has an intense emotional palette and complex mental health. Her brain is a bitter-sweet collaborator: within it, she holds a “galaxy of cognition, thoughts and emotions people have shared with me that stay in my head. I constantly worry for everyone and everything. I’d be so happy if perceptions shifted; if mental ‘disorder’ came to be seen as ‘mental gorgeousness’ – ‘you are mentally gorgeous’. It’s not easy, but I am learning to accept this acuteness, this sensitivity.”

Hiromi, all smiles and rainbow colour during “Behind the door” (2010), a performance installation with local artists and public during NOW RIGHT NOW!, Perth Institute of Contemporary Arts. Photograph by Sarah Rowbottam.

Tango’s collaborators: fellow artists and strangers, often remark on the generosity of her work. While it is fair to say that Tango creates out of necessity – in order to free herself from mental demons and to communicate what cannot be expressed in words ­– her work is fundamentally open and inviting. Like Rirkrit Tiravanija or locally, the artist collective Field Theory, Tango creates in the mode of relational art, positioning herself as a kind of cultural barometer, setting the perfect conditions for social connection. Tango harnesses her internal battles, translating this energy into positive exchange. She likens her process to that of a bowerbird. “I cannot throw away anything significant: tissues, from the time someone cried; letters, cards, and artworks given by people who I’ve met. Changing something we might forget into something that remains within us, in our memory, blood, genes. On what makes her happy, Tango says she shares her three year old’s enthusiasm for laughter. “I am a mother of two daughters, and the only way I can live is to be optimistic in the face of reality. I believe art has a power to help give us comfort, joy and strength. Optimism for me is a child’s brain and re-learning how to play, for the sake of playing. Mixing food very seriously for the sake of mixing. Drawing snowmen with octopus legs. The fun is contagious.”

To find out more about Hiromi Tango and her work, visit her website. Thanks to Hiromi for the photographs (credits listed above) and her candid conversation and communications, often from remote locations and with lots of art to make at the same time.

Eugenia is an artist who uses video, installation and performance to activate people in private and public space. She was AP's founding editor-in-chief and has returned as editor-at-large. In art and life, she is interested in the intersection between the personal and the geopolitical. Agnès Varda is her hero.

Mierle Laderman Ukeles: A Human Being is the Whole World

'After the revolution, who's going to pick up the garbage on Monday morning?', asked artist Mierle Laderman Ukeles in her Manifesto for Maintenance Art 1969! Eugenia Lim converses with the New York City Department of Sanitation's long-time official artist-in-residence about womanhood, motherhood and the social ecologies of our cities.

Golden Girls write songs about love, sex and literature, blending hard beats and soft vocals with deep subs and melodic bass. On Sat 10 Dec they’ll be appearing at Blow-Up in Brunswick: a one-night festival inside a blown-up inflatable structure conceived in association with RMIT Architecture's Pneumatic Structures Unit. Jake from Golden Girls shared this mix ahead of the party.

Iggy’s Bread of the World

With its beginnings in Boston, Massachusetts, Iggy's Bread in Bronte came about as a happy accident during a visit to Sydney by owners Igor and Ludmilla Ivanovic. Fast-forward to 2016, and Iggy's Bread in Bronte is something of an institution in the area, with its community-focused philosophies driving the business. Regular AP contributor Rafaela Pandolfini takes a behind-the-scenes look at her favourite neighbourhood haunt.

about face: interview with kim jaeger

After dabbling in creativity in all its forms, Kim Jaeger found her calling in the art of ceramics. Her magic digits bring otherwise inanimate clay to life in the form of her Pot Heads. Heather Lighton visits Kim's studio to talk inspiration and get the backstory on these crafted characters. You can see Kim's quiet creatures hanging out in the window of Craft Victoria until 29 June.